Hurry! Only 121 Shopping Days Left Before Christmas; What to Expect This Holiday Season; Perpetual Christmas 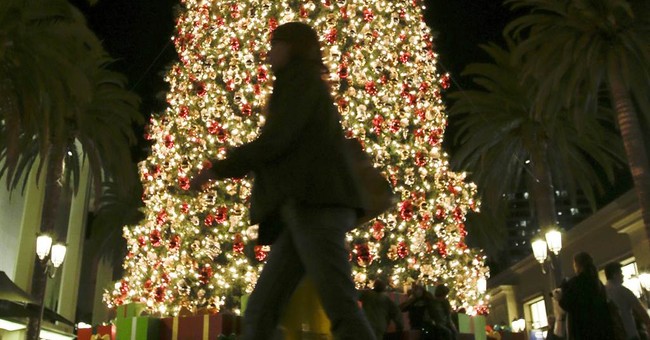 If you think that sounds ridiculous so do I. But all it takes is for one major retailer to start Christmas promotions a few days earlier than last year, and all the lemming fall in line.

What to Expect This Holiday Season

Many top retailers have cut their full-year earnings outlooks, a clear indication they see a rough holiday season ahead.

Wal-Mart Stores Inc. WMT , cognizant of the climate, is wasting no time getting a jump on the competition.

Citigroup analyst Deborah Weinswig said Wal-Mart’s layaway-tied sales last holiday season rose about 10%. “We have a cautious view on the consumer,” she said, adding Wal-Mart’s no-fee program will resonate with shoppers given the challenging economic environment.


Even before the school bells are ringing for many families, retailers are sounding sleigh bells.

Yes, that's right. With 120-plus shopping days left, stores are already talking up their holiday offers.

Toys R Us announced Wednesday that it would expand its price-match guarantee to include online retailers including Amazon.com, Walmart.com, Target.com and BestBuy.com, among others. The aim, according to the release, "Removing any doubt before holiday shopping begins in earnest that customers are receiving the best available prices."

"Retailers are determined not to be left on the sidelines," said Dave Cheatham, managing principal of Velocity Retail Group. "They're reinventing the rules on how to do holiday shopping."

And there is some basis for the Christmas-in-August approach. "We do know that 40 percent of holiday shoppers say they begin shopping before Halloween," said Kathy Grannis, spokeswoman for the National Retail Federation. If it draws in even a few extra customers, early action can be a big advantage in a competitive season, she said.

So when does Christmas in July start? Heck, why not perpetual Christmas?

And I have just the slogan: "It's always Christmas at Wal-Mart". And if it's "Always Christmas",  there's never any shopping days left - so you really better hurry with that shopping!

Wal-Mart better grab this slogan before Amazon does.

Retailers seem to be worried. But if consumers behave rationally for a change, it will be a good thing.