Everything You Need to Know about Friday's Unemployment Numbers

The establishment survey showed a gain of 195,000 and that is a very respectable number. However, the household survey shows a more modest gain of 160,000 jobs.

The civilian labor force rose by 177,000 thus the unemployment rate was steady at 7.6%. Digging beneath the surface, the numbers do not look so good.

Last month there was no jump in part-time employment which had me wondering if the the bulk of the Obamacare effect (employers reducing hours from 32 to 25 and hiring hundreds of thousands of new employees to make up the hours) had mostly played out.

This month, the trend of huge part-time employment resumed, and in a major way. 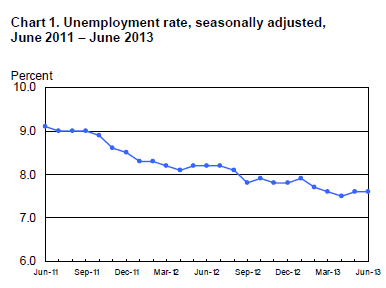 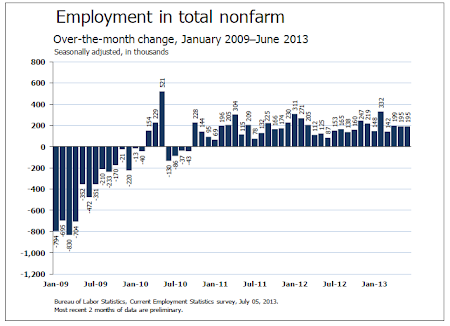 click on chart for sharper image  Hours and Wages Private average weekly hours of production and non-supervisory workers were flat at 33.7 hours. Average weekly hours of all employees was flat at 34.5 hours. Average hourly earnings of all private workers rose $0.10 to $24.01. Average hourly earnings of private-sector production and non-supervisory employees was up $0.05 to $20.14. Real wages have been declining. Add in increases in state taxes and the average Joe has been hammered pretty badly. For 2013, one needs to factor in the increase in payroll taxes for Social Security. For further discussion of income distribution, please see What's "Really" Behind Gross Inequalities In Income Distribution? BLS Birth-Death Model Black Box The BLS Birth/Death Model is an estimation by the BLS as to how many jobs the economy created that were not picked up in the payroll survey. The Birth-Death numbers are not seasonally adjusted, while the reported headline number is. In the black box the BLS combines the two, coming up with a total. The Birth Death number influences the overall totals, but the math is not as simple as it appears. Moreover, the effect is nowhere near as big as it might logically appear at first glance. Do not add or subtract the Birth-Death numbers from the reported headline totals. It does not work that way. Birth/Death assumptions are supposedly made according to estimates of where the BLS thinks we are in the economic cycle. Theory is one thing. Practice is clearly another as noted by numerous recent revisions.
Birth Death Model Adjustments For 2012 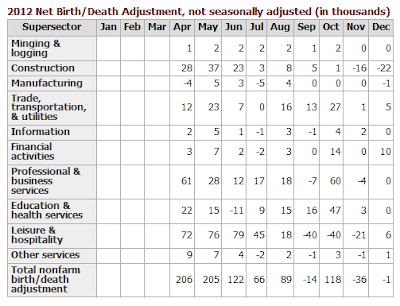 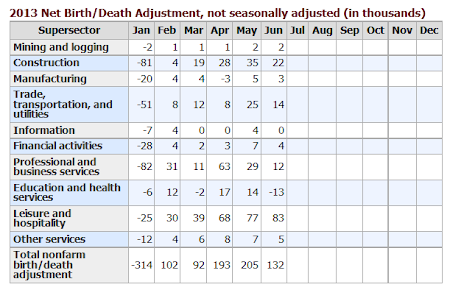 Birth-Death Notes Once again: Do NOT subtract the Birth-Death number from the reported headline number. That approach is statistically invalid. In general, analysts attribute much more to birth-death numbers than they should. Except at economic turns, BLS Birth/Death errors are reasonably small. For a discussion of how little birth-death numbers affect actual monthly reporting, please see BLS Birth/Death Model Yet Again. Table 15 BLS Alternate Measures of Unemployment 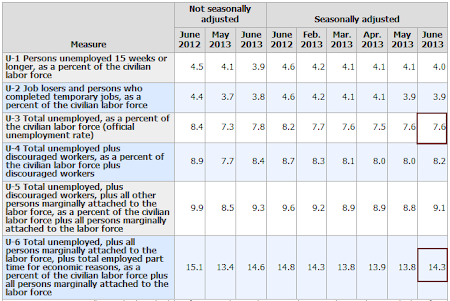 Were it not for people dropping out of the labor force, the unemployment rate would be over 10%. In addition, there are 8,226,000 people who are working part-time but want full-time work.  Grossly Distorted Statistics Digging under the surface, much of the drop in the unemployment rate over the past two years is nothing but a statistical mirage coupled with a massive increase in part-time jobs starting in October 2012 as a result of Obamacare legislation. Mike "Mish" Shedlock http://globaleconomicanalysis.blogspot.com