The flareup in Brazil erupted in violence overnight as millions protested corruption, inflation, bus fares and a seemingly growing list of items.

Unsurprisingly, the Brazilian real weakened against the dollar now in its sixth consecutive day of decline.

Brazil’s swelling street rebellion claimed its second fatality in the largest and most violent protests yet, as 1 million demonstrators rallied for better public services and an end to corruption.

President Dilma Rousseff, who has been struggling to get in front of the mass movement, will meet with cabinet members today to discuss emergency measures to help quell violence and prepare proposals on education, health and other demands of protesters, a government official aware of her agenda said.

The movement triggered by an increase in bus fares this month has spread amid a groundswell of discontent among Brazil’s middle classes.

Almost 1 million people marched in 27 capital cities, Folha reported, citing police estimates in each state. That’s four times the estimated turnout on June 18, which was the previous record for the growing movement.

The biggest demonstration was in Rio, where O Globo newspaper estimates 300,000 people turned out. While the demonstrations there were largely peaceful, a group of stone-throwing protesters who set upon Rio’s city hall were met by cavalry and foot soldiers firing rubber bullets. More than 60 people were injured, including eight police officers, Mayor Eduardo Paes said to reporters today. 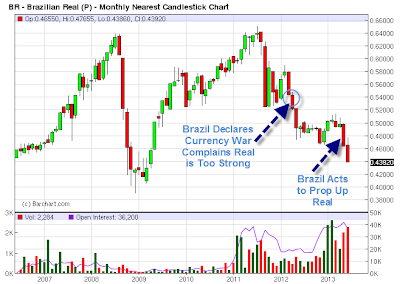 click on chart for sharper image How Currency Wars End Brazil bitched an moaned about having a currency that was too strong. Finance minister Guido Mantega declared a "fresh currency war" in March of 2012 after having already used the term in 2010. "When the real appreciates, it reduces our competitiveness. Exports are more expensive, imports are cheaper and it creates unfair competition for businesses in Brazil," said Mantega The Keynesian and Monetarist fools in Brazil got what they asked, a weakening currency. Now they don't like the end results. Hot money is fleeing, the Real is sinking, inflation is soaring, and Brazil has no idea how to stem the tide (or the protests). A similar fate awaits Japan's Abenomics as well as the Shadow Banking System in China. As I said earlier, "Problems are easy to overlook in a seemingly good economy when jobs are plentiful. It's much different when the boom ends and the corruption becomes obvious."  For further reading, please see ...