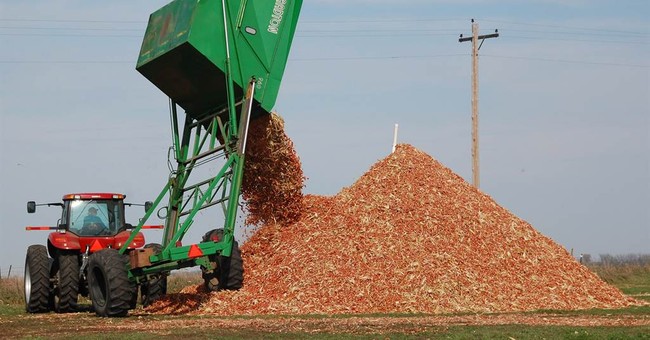 Last week Florida Governor Rick Scott signed HB 4001, repealing the state’s Renewable Fuel Standard. This has researchers seeking handouts at the expense of everyone else in a tizzy.

“Companies have invested more than $215 million in Florida over the past five years to develop commercial-scale advanced biofuel projects. These projects have generated nearly 1,000 high skill new jobs in the state,” Erickson continued. “Florida’s bioscience industry has monitored the state’s commitment to policies that drive investment and development of new industries. Florida’s biotech sector comprises more than 5,100 companies that employ more than 78,000 Floridians, contributing to the state’s job growth over the past decade.

I am all in favor of research, as long as taxpayers don't have to pay for it. And mandated ethanol standards come at enormous cost.

It looks like ethanol – especially when blended into gasoline – is facing some pushback. Florida has decided to repeal its Renewable Fuel Standard, which had required all gasoline sold in the state to be blended with nine-to-10 percent ethanol or other alternative fuels.

Florida Governor Rick Scott just signed into law HB4001, which repeals the state's Renewable Fuel Standard as of July 1, 2013. The bill was passed by the Florida House and Senate in April. The Florida Renewable Fuel Standard Act took effect December 31, 2011 and required all gasoline sold by terminal suppliers, importers, blenders or wholesalers (i.e., those up the supply chain) to be blended. These parties were also required to submit a monthly report to the Department of Revenue on the numbers of gallons of blended and unblended gasoline sold. Retail gas stations had not been expressly prohibited by state law from selling or offering unblended gasoline, Green Car Congress reports.

In his signing statement, Scott called the state's Renewable Fuel Standard, "a state mandate on Florida businesses that is duplication of the Federal Renewable Fuel Standard and inconsistent with the efforts to reduce the regulatory burdens that have helped Florida create over 330,000 new private sector jobs in the past two years."

The state of Maine is going in a similar anti-ethanol direction. Legislators are concerned about the damaging impact ethanol blend going up to 15 percent in gasoline (E15) could have on engines and the environment. They approved a bill by more than a 3-to-1 margin that would ban ethanol blends in Maine, as long as two other nearby states do the same. State leaders also supported a resolution asking the government to ban E15 altogether.

This Week in Energy reports Ethanol Debacle Heats Up.

This summer we can expect the Environmental Protection Agency (EPA) to set new targets for US ethanol use while the policy comes under massive criticism. The market has been unkind to the ethanol mandate, and we’re not sure how the EPA is going to now attempt to push through a higher blend ethanol in fuel—above the 10%/gallon, when ethanol supplies aren’t there.

So the new targets to be released this summer will require a bit of a re-think, and the EPA will have to decide how to resolve the issue, which could mean a lowering of targets or an elimination of them altogether.

Refiners and ethanol producers are up in arms over the mandate, which is already threatening to cause fuel shortages and higher prices for consumers—along with higher food prices thanks to the diversion of corn for the ethanol blend.

Of course, the beneficiaries of the EPA’s ethanol targets—primarily the corn-growing states—are hoping there won’t be any lowering of the requirements, but the market clearly sees things differently.

Those trading in Renewable Identification Markets (RINs)—otherwise known as ethanol credits—are also hoping the largesse of the forced mandate continues. The more difficult it becomes to blend low supplies of ethanol with gasoline, the more valuable these RINs become for traders. And the opposition to increasing this mandate from 10% is making the RIN market more vulnerable. For this year, it looks like refiners will be able to meet the ethanol requirements—with help from RIN credits—but next year looks impossible.

What will the EPA’s summer target be? No one’s quite sure yet, including the EPA, so it’s impossible to predict, but we’re inclined to think that the market will convince them that the planned 2014 target of 18.15 gallons of ethanol (up from this year’s 16.5 gallons) is unrealistic.

Silly Senator, Corn is For Food

Please play the video for a correct interpretation of what is happening and why. Link if video does not play: Silly Senator, Corn is for Food!.

Ethanol advocates claim that ethanol is a cheap, renewable energy source that reduces pollution and our dependence on foreign oil. It sounds too good to be true--and it is.

Video quote: "Oil prices are as high as they have ever been, if renewable fuels, biofuels were such a good deal, they would already be emerging without government subsidies."

'Atrocious': How a Trump Shop Owner in WI Sees Defunding the Police

If your protest blocks and attacks a car, you’re going to get run down
Hotair
The Church Has Spectacularly Failed the COVID Test…and the Faithful
Redstate