Reflections on the "Wage Recession"

Jed Graham at Investor's Business Daily has an interesting chart showing Wage Recession Hits 5 Years; Worse Than Jobs Drought. I can show it's even worse, but first let's consider a chart and commentary by Graham.

As bad as the current job recovery has been — and it's by far the weakest since World War II — the recovery in wages has been far worse.

Five years after the recession began in December 2007, total wages in the economy have yet to fully recover in real terms, Commerce Department data show. In other words, the wage recession continues.

By comparison, the longest previous post-war wage recession, which began with the 2001 downturn, was over in 2-1/2 years, even though that jobs recession lasted four years.

In recoveries past, wage recessions have ended long before payrolls hit new highs. But in the current expansion, wages and employment are on the same slow track to recovery. Both remain about 2% below their old peaks. 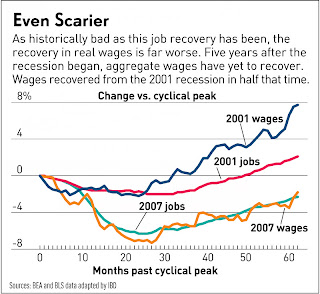 Instead of looking at wages, let's consider real disposable income as a measure of the "wage recession". Here is a chart from Doug Short at Advisor Perspectives on Nominal vs. Real Income. 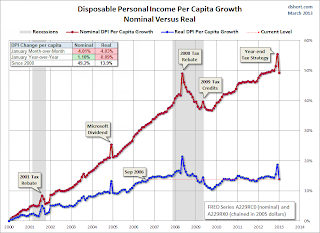 I commented on this previously in Top 1% Received 121% of Income Gains During the Recovery, Bottom 99% Lose .4%; How, Why, Solutions.

Also consider my followup post Reader Asks Me to Prove "Inflation Benefits the Wealthy" (At the Expense of Everyone Else). 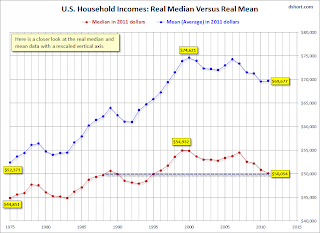 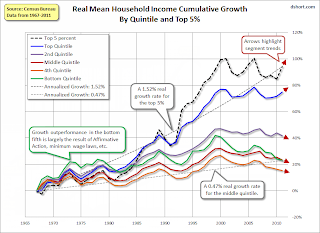 The above chart shows percentage income growth by quintile since 1967. Since 1988, the bottom, 4th and middle quintiles (a combined 60% of households) have negative real income growth.  The next chart shows the same thing in a different way. 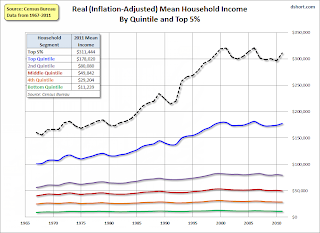 No matter what your timeframe, only the top quintile did well. And from 1980 until 2000 the top 5% got the lion's share of income gains.

How Long a Recession?

Those in the bottom three quintiles have not seen any improvement in real income since 1988 or longer (25 Years)!

To be fair, some people have moved up from quintile to quintile (or up within a quintile). However, unless someone moved up to the top quintile (if not the top 5%), inflation adjusted income growth has been a real struggle for a long time.
Mike "Mish" Shedlock
http://globaleconomicanalysis.blogspot.com
Share this on Facebook
Tweet
Pennsylvania Justices Accused of Playing Politics After Dismissing Challenge Over Absentee Ballots
Bronson Stocking|
One Democrat Governor Is Giving Rare Credit to President Trump for Coronavirus Vaccines
Bronson Stocking|