The Stressed Millennials- Screwed by Obama, the Unions and Generation Fed

Those looking for a reason for sluggish housing, weak retail sales, and low family formations rates, need only look at the plight of millennials (those aged 18-33).

Many millennials have no job, high student debt with no way to pay the debt off, and few job opportunities beyond part-time employment in food services or retail.

Millennials are the ones who Obama targeted to pay for Obamacare. Indeed, the forced inclusion of youth (who will overpay for health care) is supposedly what made Obamacare "affordable".

Yet, even with the screw job on youth, the "Affordable Health Care Act" is so unaffordable that Companies Opt of Obamacare, Not Even Labor Unions Want It.

Speaking of labor unions, the odds millennials get the same benefit packages going forward that public unions receive today are roughly zero percent. Nonetheless, expect tax rates on millennials to rise so that ungracious, unappreciative boomers get ridiculous benefits they do not deserve and did not earn.

Is it any wonder a study of of Stress in America by the American Psychological Association shows millennials to be the most stressed generation. 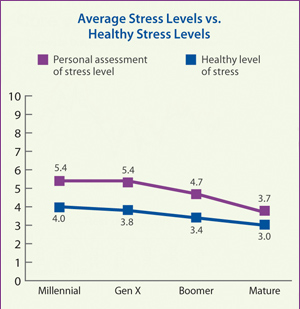 Thirty-nine percent of Millennials say their stress has increased in the last year, compared to 36 percent of Gen Xers, 33 percent of Boomers and 29 percent of Matures.

More than 52 percent of Millennials report having lain awake at night in the past month due to stress, compared to 48 percent of Gen Xers, 37 percent of Boomers and 25 percent of Matures.

Additionally, 44 percent of both Millennials and Gen Xers report experiencing irritability or anger due to stress, compared to 36 percent of Boomers and 15 percent of Matures.


Not surprisingly, work is one of the biggest causes of stress, with 76 percent of Millennials reporting it as a significant stressor, compared to 62 percent of Boomers and 39 percent of Matures. "Many of these young people have come out of college or graduate school with horrendous student debt into a job market where there are not very many jobs," said Katherine Nordal of the APA. "This has put their life plans, probably, on hiatus."

The job numbers are indeed grim. According to Generation Opportunity, the unemployment rate for Millennials rose to 13.1 percent in January, up nearly 2 points from December. Among young African-Americans, it's a whopping 22.1 percent. And if you count those 18-29 year-olds who have given up and dropped out of the labor force, the overall youth unemployment rate stands at 16.2 percent.

And even for the lucky ones who are working, the picture remains bleak. According to the Economic Policy Institute, between 2000 and 2011 wages adjusted for inflation fell by over 11 percent for young high school grads and by 5.4 percent for young college grads. It doesn't help that, as a study by the Center for College Affordability found, 48 percent of working college grads are in jobs that don't require a college degree and 38 percent are in jobs that don't require a high school diploma. The report concluded that from 2010 to 2020, while 19 million college grads will be hitting the job market, the economy will add fewer than 7 million jobs requiring a college degree. That's a pretty serious -- and stress-producing -- gap.

And any of those heavily indebted, heavily stressed-out Millennials listening to President Obama's State of the Union speech would not have gotten much stress relief. He did acknowledge the increasingly untenable cost of higher education -- "Today, skyrocketing costs price too many young people out of a higher education, or saddle them with unsustainable debt" -- and declared that he would "ask Congress to change the Higher Education Act so that affordability and value are included in determining which colleges receive certain types of federal aid."

Not Promising at All

In regards to Obama's plans for education, Arianna Huffington misses the mark completely.

She says "Obama's push for colleges and universities to increase enrollment and the number of degrees they grant is a great goal." She also says changes to the higher education act "sounds promising if it ever happens".

Affordable education won't happen under Obama because neither Obama nor Huffington address the fundamental problems.

The millennials were screwed by all of the above. They were also screwed by Fed policies that punish savers to the benefit of the already wealthy.

Millennials became debt slaves in the process, to the benefit of the banks, the school administrators, and the teacher's unions.

Stressed by that? You bet. Screwed is more like it.

For an explanation of how millennials were screwed by the Fed, please see ...

The Daily Beast asks Are Millennials the Screwed Generation?


How has this generation been screwed? Let’s count the ways, starting with the economy. No generation has suffered more from the Great Recession than the young. Median net worth of people under 35, according to the U.S. Census, fell 37 percent between 2005 and 2010; those over 65 took only a 13 percent hit.

The wealth gap today between younger and older Americans now stands as the widest on record. The median net worth of households headed by someone 65 or older is $170,494, 42 percent higher than in 1984, while the median net worth for younger-age households is $3,662, down 68 percent from a quarter century ago, according to an analysis by the Pew Research Center.

Quick prospects for improvement are dismal for the younger generation. One key reason: their indebted parents are not leaving their jobs, forcing younger people to put careers on hold. Since 2008 the percentage of the workforce under 25 has dropped 13.2 percent, according to the Bureau of Labor Statistics, while that of people over 55 has risen by 7.6 percent.

The screwed generation also enters adulthood loaded down by a mountain of boomer- and senior-incurred debt—debt that spirals ever more out of control. The public debt constitutes a toxic legacy handed over to offspring who will have to pay it off in at least three ways: through higher taxes, less infrastructure and social spending, and, fatefully, the prospect of painfully slow growth for the foreseeable future.

In the United States, the boomers’ bill has risen to about $50,000 a person. In Japan, the red ink for the next generation comes in at more than $95,000 a person. The huge public-employee pensions now driving many states and cities—most recently Stockton, California toward the netherworld of bankruptcy represent an extreme case of intergenerational transfer from young to old. It’s a thoroughly rigged boomer game.

More maddening still, the payback for this expensive education appears to be a chimera. Over 43 percent of recent graduates now working, according to a recent report by the Heldrich Center for Workforce Development, are at jobs that don’t require a college education. Some 16 percent of bartenders and almost the same percentage of parking attendants, notes Ohio State economics professor Richard Vedder, earned a bachelor’s degree or higher.

My friend "BC" has a few thoughts on the screwed generation. "BC" writes ...

The generation coming of age does not have the paid employment and after-tax purchasing power necessary to support the growth of a debt-based mass-consumer economy, big mortgages, the crushing costs of parenting, discretionary spending, Obamacare, and elder transfer programs for the Boomers nor for themselves.

In this sense, the Millennials are the "Last" Generation.