A Look at the Fed-Sponsored Housing Bubble

In the wake of rising housing prices a reader asked if I would revisit my March 2102 article How Far Have Home Prices "Really" Fallen.

The reader specifically wanted an update on inflation as measured by the HPI-CPI (a measure of the CPI where actual home prices instead of rent is the largest CPI component).

Here is some background on the request: The CPI does not track home prices per se, rather the CPI uses a concept called "Owners' Equivalent Rent" (OER) as a proxy for home prices.

The BLS determines OER from a measure of rental prices and also by asking the question “If someone were to rent your home today, how much do you think it would rent for monthly, unfurnished and without utilities?”

If you find that preposterous, I am sure you are not the only one. Regardless, rental prices are simply not a valid measure of home prices.

OER has the single largest weight of any component in the CPI, at 23.957%. 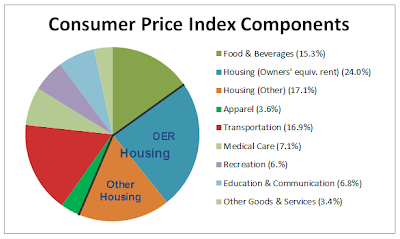 Let's play "What If?" Specifically, "What if the BLS used actual home prices instead of OER in calculating the CPI?"

I passed on an Excel spreadsheet of LPS HPI aggregate housing prices to Doug Short at Advisor Perspectives and he produced the following charts.

Comparative Growth in HPI vs. OER 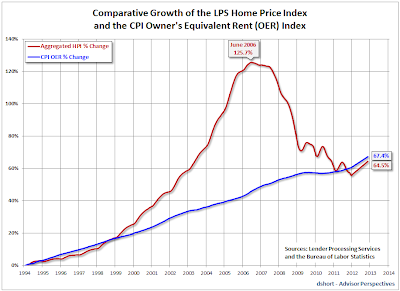 From 1994 until 1999 there was little difference in the rate of change of rent vs. housing prices. That changed in 2000 with the dot.com crash and accelerated when Greenspan started cutting rates.

The bubble is clearly visible but neither the Greenspan nor the Bernanke Fed spotted it. The Fed was more concerned with rents as a measure of inflation rather than speculative housing prices. 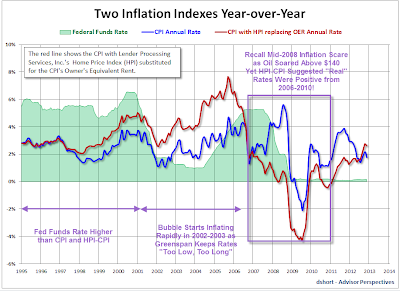 The above chart shows the effect when housing prices replace OER in the CPI.  In mid-2004, the CPI was 3.27%, the HPI-CPI was 5.93% and the Fed Funds Rate was a mere 1%. By my preferred measure of price inflation, real interest rates were -4.93%. Speculation in the housing bubble was rampant.

In mid-2008 when everyone was concerned about "inflation" because oil prices had soared over $140, I suggested record low interest rates across the entire yield curve. At that time the CPI was close to 6% but the HPI-CPI was close to 0% (and plunging fast).

As measured by HPI-CPI real interest rates were positive from mid-2006 all the way to 2010, even when the Fed Funds rate crashed to .25%. That shows the power of the housing crash. 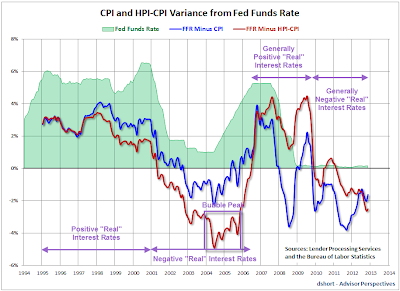 With the recent rise in housing prices, the HPI-CPI is 2.78% while the CPI as stated by the BLS is 1.76% (both numbers from November).

In my estimation, the BLS and Fed now understate price inflation by a full percentage point. Inflation as measured by expansion of credit is another matter.

Variance Between the CPI and HPI-CPI 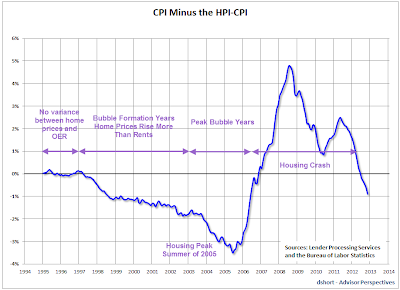 The above chart shows the difference between the CPI and HPI-CPI. Note that the largest negative discrepancy marked the exact top of the housing market in summer of 2005.

Massive housing incentives such as "free garages", "free landscaping", "free trips", etc., etc. started in summer of 2005. So did fraudulent kickbacks to the buyer. "Official" prices did not reflect those incentives and kickbacks.

Moreover, condo prices in many areas crashed in summer of 2005 and condos are not in the home price indices.

How Far Have Home Prices Crashed? 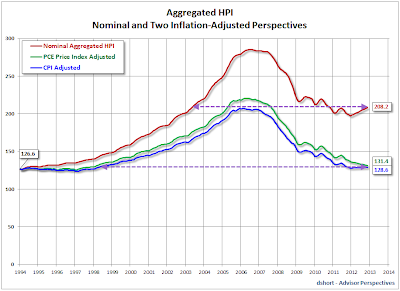 Bubble and crash courtesy of the Fed, the banks, and Congress