The proportion of U.S. student loan balances that are in delinquency — that is, unpaid for 90 days or more — surpassed that of credit-card balances in the third quarter for the first time, according to the Federal Reserve Bank of New York. [no link provided]

Of the $956 billion in student-loan debt outstanding as of September, 11 percent was delinquent — up from less than 9 percent in the second quarter, and higher than the 10.5 percent of credit-card debt, which was delinquent in the third quarter. By comparison, delinquency rates on mortgages, home-equity lines of credit and auto loans stood at 5.9 percent, 4.9 percent, and 4.3 percent respectively as of September. 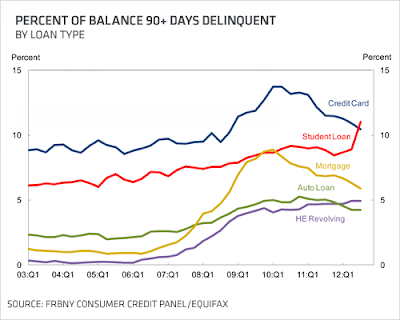 Since the NY Fed’s data began in 2003, the share of student debt which is delinquent has nearly doubled, from a starting level of 6.13 percent, while credit-card delinquency has steadily drifted lower since peaking at 13.74 percent in mid-2010 in the wake of the financial crisis.

Moreover, the actual rate of student loan delinquency is far higher than the official tally suggests. According to the New York Fed [no link provided], “these delinquency rates for student loans are likely to understate actual delinquency rates because almost half of these loans are currently in deferment, in grace periods or in forbearance and therefore temporarily not in the repayment cycle.”

In other words, the real delinquency rate for loans in the current repayment cycle is “roughly twice as high,” per the Fed — which would put it north of 20 percent.

37.5% of Graduates Work in Jobs Requiring No Degree


Cohn mentioned the word "study" fourteen times without once providing a link to the study, or even mentioning the name of the study. I suspect this is some kind of record, jut not one anyone should be proud of.

Such semi-plagiarism is quite frankly inexcusable.

Who is to Blame?

I receive emails from readers all the time blaming the problem on point number four above, state budget cuts.

Taxpayers are overburdened too much already.  States have cut back on the percentage of money to education out of sheer necessity as education costs have risen far faster than anything else including health care and energy.

Here are some charts and comments from my post What Role Does Government Play in Price Inflation? 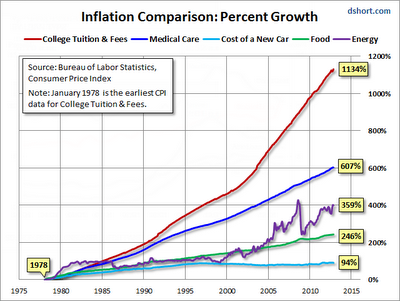 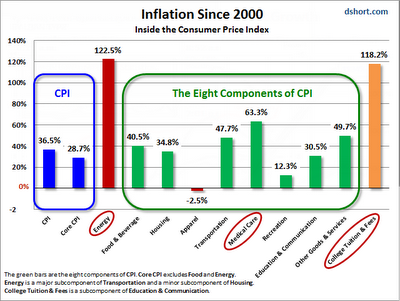 The above charts are from Doug Short at Advisor Perspectives. Doug creates excellent charts every month on various CPI components. Rather than reinvent the wheel, I asked Doug for a set of custom charts.

Specifically, I had asked Doug to go back to 1971 for both charts.

Unfortunately, data for components in the first chart only goes back to 1978, and in the second chart not even that far.

The reason I asked for a starting year of 1971 is that's when I started college.

Education is rife with "no child left behind" madness, free tuition for veterans, and for-profit school scams that flourish only because student loans cannot be discharged in bankruptcy.

I have talked about this many times before. One key post is Trading Caps and Gowns for Mops; Why Go to College If There Are No Jobs? Chasing the American Dream


Some People Do Not Belong in College

Pelletier perpetuates the myth everyone belongs in college. Many don't. Arguably at least half don't. In Portland Oregon, ACT scores show less than half of test-takers are ready for college math

Yet colleges churn out thousands of graduates, year after year, with perfectly useless degrees.
Debt Slaves

President Obama promotes education as the answer to the unemployment problem. Other presidents have done the same thing. However, throwing money at the problem has done nothing but raise the cost of education for everyone, leaving many graduates debt-slaves for life, with totally useless degrees.

Expect such problem to grow until they blow sky high, which appears to be right at hand.


I assure you that if those actions were taken cost of college education would crash. But no one really wants that, any more than they want affordable housing.

Politicians gain far too much in campaign contributions from unions, from for-profit schools, and from banks wanting to make kids debt-slaves, to really address the problem.

Legislators would rather pretend they want to do something rather than actually doing something because it suits their purpose (getting reelected). Unfortunately, millions of students will pay the price as debt-slaves for life.

Regarding Who Won the First Debate, Telemundo's Poll Offered Some Very Bad News for Joe Biden