Political charges flew on Friday following the unexpected drop in unemployment rate by three-tenths of a percent.

In two of the last three months the unemployment rate fell solely because of people dropping out of the labor force. This past month, people came back in the labor force but part-time hiring and government hiring went up even more.

Government hiring went up by 187,000 in September, something I failed to mention yesterday. 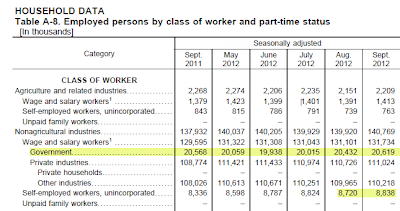 Taking a closer look, seasonally-adjusted, the number of government workers went up by 681,000 since June. (20.619 million in September vs. 19.938 million at the June low point). That's a lot of jobs (and jobs the economy can do without in my opinion).

Regardless, unless the BLS changed its survey methods or survey questions, as wild as the numbers seem, charges of political pandering are likely to be misguided.

Did the BLS make adjustments to how it asked questions? If so, someone would probably have spilled the beans already.

This was not as strong a report as it first looked, whether one considers it "unbelievable" or not.