Extreme Drought Hits Much of US; Ranchers Sell Herds as Feed Costs Skyrocket

Corn, soybean and wheat prices have soared lately due to poor crop estimates amid extreme drought conditions in 26 states.

Let's take a look at those conditions, followed by charts of agricultural commodities

The Atlantic Wire reports U.S. Declares the Largest Natural Disaster Area Ever Due to Drought 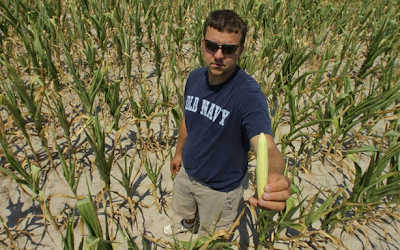 The blistering summer and ongoing drought conditions have the prompted the U.S. Agriculture Department to declare a federal disaster area in more than 1,000 counties covering 26 states. That's almost one-third of all the counties in the United States, making it the largest distaster declaration ever made by the USDA.

The declaration covers almost every state in the southern half of the continental U.S. However, it does not include Iowa, which is the largest grain and corn producer in the U.S.

About 53 percent of the country is facing "moderate to extreme drought" so far this summer. 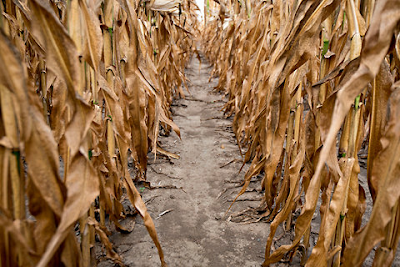 More than 1,000 counties in 26 states across the country were named natural-disaster areas on Thursday in a statement from the U.S. Department of Agriculture. It was the single largest designation in the program’s history and the worst drought since 1988, government officials said.

SECRETARY VILSACK: Thank you, and thanks to all who are on the call. I am joined today by Juan Garcia, FSA, and Brandon Willis, who is from my office, and if there are very detailed questions, I may ask either one of those gentlemen to help me.

We just had a crop report today, which indicated a significant reduction in corn production as well as bean production, lower forecast for wheat, soybean, soybean oil, soybean meal, and corn, lower forecast for milk, beef, pork, broilers, and turkey. And it's obvious that weather is having an impact on the estimates of crops. Despite the fact that we have more acreage planted this year, we still are looking at significant reductions, and despite the fact that we may even with the corn estimates, as they have been reduced, would still have the third largest crop of corn in our history, nearly 13 billion bushels, and a very large soybean crop. We need to be cognizant of the fact that drought and weather conditions have really impacted and affected producers around the country. 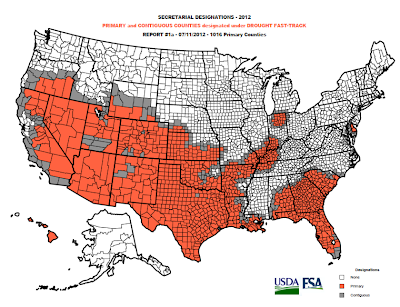 Fast-Track means farmers and ranchers will be able to access “faster and more flexible assistance”. Actual drought conditions are worse than the above map indicates as shown by the following map.
U.S. Drought Monitor 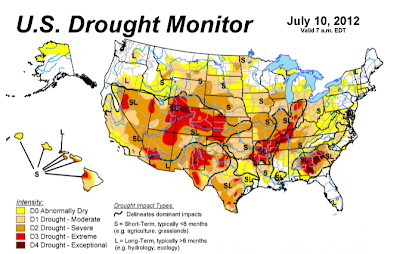 Click here for a very nice 12-week time-lapse drought animation of the above chart. 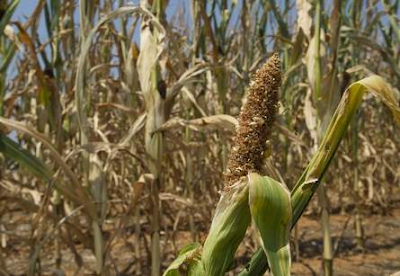 Corn wilts in high temperatures in a filed along Upper River Road in Priceville, Ala., Friday, June 29, 2012, as temperatures exceeded 100 degrees. Thirty-three Alabama counties, mostly in the Southern part of the state, are under a severe drought emergency. (Brennen Smith | Decatur Daily | Associated Press)


An eastern Iowa triangle from the Quad Cities and Dubuque extending west to Cedar Rapids and near Waterloo has joined Illinois, Indiana and Missouri as places in “severe drought.”

The updated U.S. Drought Monitor map issued Thursday by the U.S. Department of Agriculture, the National Weather Service and the University of Nebraska returned western Iowa to abnormally dry status after a week of virtually no rainfall.

The weather service forecasts what it calls a “slight chance” of thunderstorms for today and Saturday, with temperatures returning to the mid-90s by Monday.

Midwest drought is severe or extreme in most of Missouri, Illinois and Indiana. The western half of Nebraska is now in severe drought and parts of western Kansas are experiencing extreme drought, according to the updated map.


Ranchers are rushing to sell off some of their cattle as the worst drought in nearly 25 years dries up pastures, thins hay supplies and sends feed costs sky-rocketing.

The drought in the Midwest follows another one last year in the southern Plains. The 2011 drought was centered in the heart of cattle country in Texas and helped to shrink the U.S. herd to about 91 million head, the smallest in about 60 years, while sending beef prices to record highs.

A rush by ranchers to sell cattle, and in some cases hogs, could force consumers to dig deeper into their wallets next year as smaller herds can lead to higher beef and pork prices.

There has been a big jump in the number of cows slaughtered in the United States. Cows are critical to growing the beef herd, fewer cows means fewer beef cattle later. In the week ending June 30, 52,700 cows were slaughtered, 3 percent more than a year ago during the peak of the Plains drought, USDA data showed. 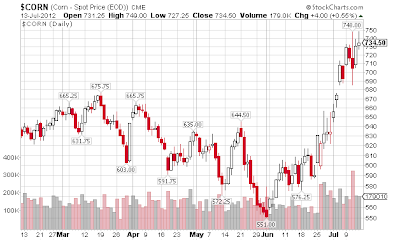 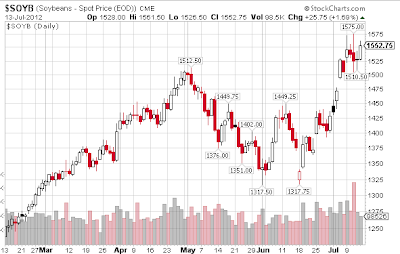 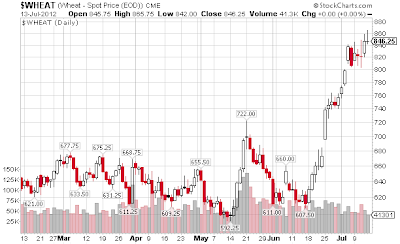 Going long agricultural commodities in early June was a winner. However, I cannot divine the weather.

The thing that amazes me in all of this is the USDA still expects the third biggest corn harvest ever.

If the drought in Iowa worsens, that is not going to happen.