Economic activity in the manufacturing sector contracted in June for the first time since July 2009; however, the overall economy grew for the 37th consecutive month, say the nation's supply executives in the latest Manufacturing ISM Report On Business®.

The Production Index registered 51 percent, and the Employment Index registered 56.6 percent. The Prices Index for raw materials decreased significantly for the second consecutive month, registering 37 percent, which is 10.5 percentage points lower than the 47.5 percent reported in May.

Comments from the panel range from continued optimism to concern that demand may be softening due to uncertainties in the economies in Europe and China." 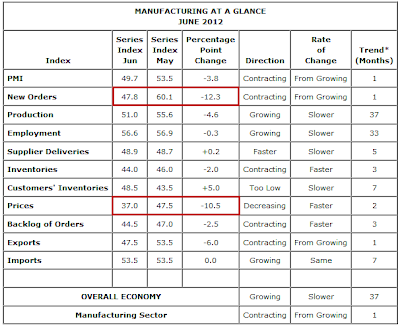 A Bloomberg Survey shows the collapse in ISM was unexpected.

While an index below 50 indicates contraction in the industry, a reading greater than 42.6 generally indicates the economy as a whole is expanding, according to ISM.

Manufacturing is weaker in the rest of the world. The industry in the euro-area contracted for an 11th straight month in June as Europe’s debt crisis sapped demand.

All 70 economists polled by Bloomberg came in on the high side. Collapses are never expected. 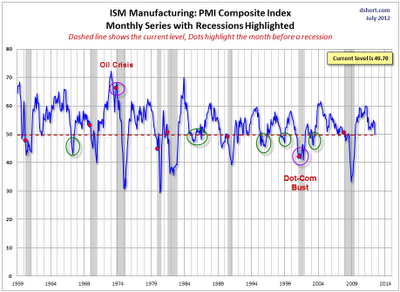 The above chart by Doug Short (annotations in red, green, and purple by Mish) shows the importance in not relying on a single indicator as strong evidence of a recession.

Since 1959, the ISM dipped substantially below the 50% mark on five occasions when there was no recession. Moreover, in the 70's oil crisis, a recession began with the ISM near 70.  The reverse happened in the wake of the Dot-Com bust as a recession did not start until the ISM was near 40.

I am sticking with what I said yesterday in China Manufacturing Weakens 8th Month; Will the US Economy Continue to Decouple From the Rest of the World?


Nearly everyone but the die-hard hyperinflationists thinks the US will decouple from the global economy. This reverse-decoupling idea is primarily based on the absurd belief the Fed will not let the economy or the stock market down (when the Fed is in fact not in control). For further discussion, please see Is There a Limit on Central Bank's Ability to Inflate?

The debate on the Fed will remain, but the facts show that I disagreed with decoupling in 2007 and I disagree with reverse-decoupling theories now.

Please see 12 Reasons US Recession Has Arrived (Or Will Shortly) for detailed rational and further discussion.

After Mouthing Off About Chauvin, Democrats Reportedly Relishing a Push to Censure Maxine Waters