Inquiring minds have noticed a huge plunge in California Tax Revenue for the month of February compared to February 2011.

The numbers below represent a 22.55% plunge in spite of the fact that this February was a leap year adding a day to the calendar.

Madeline Schnapp, at TrimTabs Investment Research sent me a quick note regarding that plunge a few days ago. 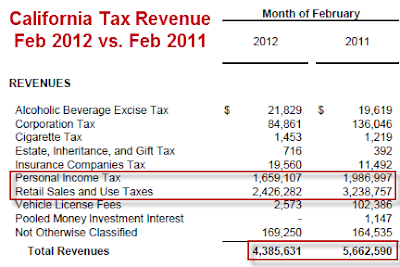 I came across this little tidbit from the February report from the Comptroller's office of the State of CA.

What about retail sales taxes? CA had a "temporary" sales tax hike of one cent that expired last July. Adjust the data to reflect that change, it looks like sales taxes in February are $400 million y-o-y +/-, a decline of about 12.4%. Double ouch!

Something About the Economy Doesn't Add Up

In Piecing Together the Jobs-Picture Puzzle, Jon Hilsenrath at The Wall Street Journal wonders "How can an economy that is growing so slowly produce such big declines in unemployment?"

Something about the U.S. economy isn't adding up.

At 8.3%, the unemployment rate has fallen 0.7 percentage point from a year earlier and is down 1.7 percentage points from a peak of 10% in October 2009. Many other measures of the job market are improving. Companies have expanded payrolls by more than 200,000 a month for the past three months, according to Labor Department data. And the number of people filing claims for government unemployment benefits has fallen.

Yet the economy is barely growing. Many economists in the past few weeks have again reduced their estimates of growth. The economy by many estimates is on track to grow at an annual rate of less than 2% in the first three months of 2012. The economy expanded just 1.7% last year. And since the final months of 2009, when unemployment peaked, the economy has expanded at a pretty paltry 2.5% annual rate.

How can an economy that is growing so slowly produce such big declines in unemployment?

That said, withholding tax data is also messy and not a perfect measure either, but no matter what I do with the data, I can't get to 200,000+ jobs unless a huge percentage of the workforce is suddenly working for McDonalds

Many Explanations for the Unemployment Puzzle

There are many explanations for the "miracle drop" in unemployment.

Those there things piece together the "unemployment puzzle" nicely except for one thing. Gallup polls do not agree as noted in Gallup Reports Large Jump in Unemployment to 9.1%, Underemployment to 19.1%.


U.S. unemployment, as measured by Gallup without seasonal adjustment, increased to 9.1% in February from 8.6% in January and 8.5% in December.

The 0.5-percentage-point increase in February compared with January is the largest such month-to-month change Gallup has recorded in its not-seasonally adjusted measure since December 2010, when the rate rose 0.8 points to 9.6% from 8.8% in November.

So, is the BLS carefully massaging the data, or are their seasonal adjustments simply that far out of line with reality, tax collections, and common sense?

Madeline and I are not the only ones who noticed the plunge in California. Chriss W. Street on Beitbart discusses the California Exodus behind the drop. Street has the reason: Businesses fed up with high taxes have fled the state.


California politicians seem delusional in their continued delusion that high taxes have not savaged the State’s economy. Each month’s disappointment is written off as due to some one-time event.

Derisively referred to as “Taxifornia” by the independent Pacific Research Institute, California wins the booby prize for the highest personal income taxes in the nation and higher sales tax rates than all but four other states. Though Californians benefit from Proposition 13 restrictions on how much their property tax can increase in one year, the state still has the worst state tax burden in the U.S.

Vranich considers California the worst state in the nation to locate a business and Los Angeles is considered the worst city to start a business. Leaving Los Angeles for another surrounding county can save businesses 20% of costs. Leaving the state for Texas can save up to 40% of costs. This probably explains why California lost 120,000 jobs last year and Texas gained 130,000 jobs.

California Governor Jerry Brown’s answer to the State’s failing economy and crumbling tax revenue is to place a $6 billion tax increase initiative on the ballot to support K-12 public schools. He promises to only “temporarily” raise personal income rates by 25% on any of the rich folk who haven’t already left.

If Brown continues to suck up to the public unions responsible for the mess California is in, expect still more businesses to leave, expect the unemployment rate to rise, and expect a continued plunge in revenue.