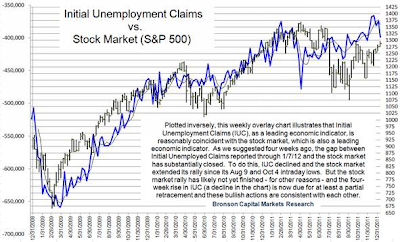 Really? No, Not Really!

This is a classic case of picking one tiny timeframe and extrapolating a coincident at best indicator (and possibly even a lagging indicator) into a leading one. Here is proof: 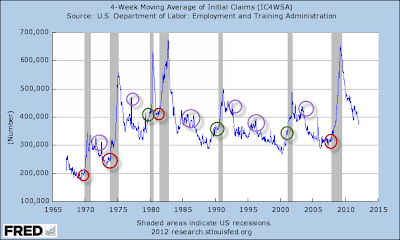 Looking at longer-term trends, I count 4 instances in red where weekly-claims was more of a lagging indicator than anything else. A recession started 4 times with weekly claims at or very near the lows.

I count 3 recessions in green where a weak case can be made that claims are a leading indicator. However, I can also count six instances in which weekly claims turned up relatively sharply and there was no recession. 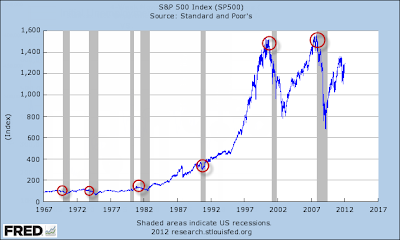 Far from being a leading indicator, on an absolute basis the S&P has a perfect track record of peaking right before or just as a recession starts. This is just as one might expect from a gauge of equity sentiment which tends to peak right before a downturn in the economy (with everyone extrapolating good times forever into the future). 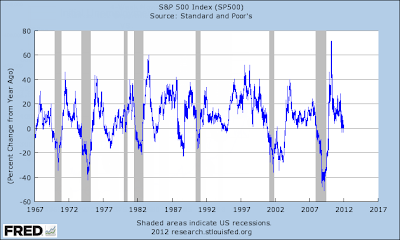 On a percentage change basis, the S&P 500 is not leading, not lagging, and not coincident. Instead it is completely useless mush.

Leading Indicators and the Risk of a Blindside Recession


Over the past few weeks, investors used to setting their economic expectations based on a "stream of anecdotes" approach have seen their economic views evolve roughly as follows:

"After a brief 'scare' during the third quarter, economic reports have come in better than expectations for weeks - a sign that the economy is on a gradual but predictable growth path; Purchasing managers reports out of China and Europe have firmed, and the U.S. Purchasing Managers Indices have advanced, albeit in the low 50's, but confirming a favorable positive trend, and indicating that the U.S. is strong enough to pull the global economy back to a growth path, or at least sidestep any downturn; New unemployment claims have trended gradually lower, and combined with a surprisingly robust December payroll gain of 200,000 jobs, provides a convincing signal that job growth is on track to improve further."

I can understand this view in the sense that the data points are correct - economic data has come in above expectations for several weeks, the Chinese, European and U.S. PMI's have all ticked higher in the latest reports, new unemployment claims have declined, and December payrolls grew by 200,000.

Unfortunately, in all of these cases, the inference being drawn from these data points is not supported by the data set of economic evidence that is presently available, which is instead historically associated with a much more difficult outcome. Specifically, the data set continues to imply a nearly immediate global economic downturn. Lakshman Achuthan of the Economic Cycle Research Institute (ECRI) has noted if the U.S. gets through the second quarter of this year without falling into recession, "then, we're wrong." Frankly, I'll be surprised if the U.S. gets through the first quarter without a downturn.

Let's examine the seemingly most "compelling" data point first - the fact that December payrolls grew by 200,000. Surely that sort of jobs number is inconsistent with an oncoming recession. Isn't it? Well, examining the past 10 U.S. recessions, it turns out that payroll employment growth was positive in 8 of those 10 recessions in the very month that the recession began.

New claims for unemployment have very slight short-leading usefulness, but new claims, the unemployment rate, and the slope of the yield curve (flattening) actually have much better lagging characteristics, so these should be used primarily to confirm an ongoing recession (particularly if the NBER hasn't made an official determination yet), rather than to anticipate a downturn. The yield curve generally flattens significantly coming into a recession, but the change in the yield curve (not plotted) is also most useful as a lagging indicator. Consumer confidence has mixed characteristics, with weak leading characteristics and somewhat greater usefulness as a lagging indicator, but in any case is too much of a "weak learner" to be used in isolation.

At present, our own recession ensembles, as well as ECRI's official views, remain firmly entrenched in the recession camp. This feels more than a little bit disconcerting, as the entire investment world appears to have the opposite view. My problem is that the data don't support that rosy "U.S. leads the world off the recession track" scenario. Leading data leads. Lagging data lags. Weak data is weak data. To anticipate a sustained economic upturn here would require us to place greater weight on weak, lagging data than we presently place on strong leading data. It's really that simple. If the evidence turns, we will shift our view - and frankly with some amount of relief. At present, though, we continue to expect a concerted economic downturn.

In sum, the balance of leading evidence continues to indicate a very high likelihood of an oncoming recession. We respect the various marginal improvements in the data in recent months, which do take the probability to less than 100%, but that is a far cry from suggesting that recession risk is anywhere close to being "off the table." Recession is not a certainty, but it remains the most probable outcome at present.

Warning About Using One Indicator in Isolation

Note the key difference between the approach of Hussman vs Bronson.

In contrast, Hussman looks at a broad array of indicators, and the combined analysis in aggregate suggests we will soon be in recession territory. 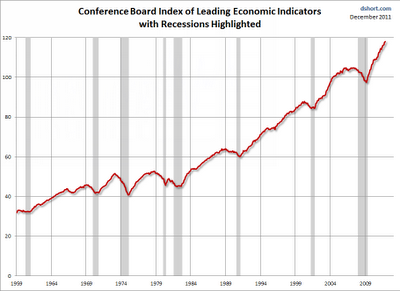 ECRI and Hussman vs. LEI

I may be wrong, but I side with Hussman and the ECRI, not the LEI.


Close to half of the weight in the LEI index goes to the two monetary components - the yield curve, and real M2. I suspect that this is a legacy of inflationary business cycles where monetary tightening in response to inflation was the typical event preceding recessions, but it adds noise in the present environment, where the primary economic risks are related to leverage and credit strains.

Remember that at present, monetary policy is way out on the "liquidity preference" curve, to an extent that is historically unprecedented (see Monetary Policy in 3D ). Normally, there is a general, if weak, linear relationship between monetary variables, interest rates and economic activity. But given the current scope of monetary policy, M2 velocity has collapsed (and moves as a perfect inverse of M2 itself), and interest rates are at the zero bound, so these variables are essentially detached from economic activity. So you've got two highly weighted variables in the index that have gone almost perfectly horizontal with respect to their effect on the economy. The crisis in Europe has triggered a flight of time deposits from European banks to U.S. banks, which shows up as a further boost to M2, which has driven much of the advance in the LEI.


For the first time since 1996, the components of the U.S. leading economic indicator index will change, according to the New York-based Conference Board.

Gone will be the inflation-adjusted money supply, the Institute for Supply Management’s supplier deliveries gauge, the Thomson Reuters/University of Michigan’s measure of consumer expectations and the Commerce Department’s orders for non- defense capital goods, the private research group said in a statement.

Replacing the money supply will be the Conference Board’s own Leading Credit Index, which aggregates measures of the yield curve, interest-rate swaps and the Federal Reserve’s senior loan officer survey. The ISM’s supplier deliveries gauge will give way to the group’s index of new orders.

Instead of using one measure of consumer confidence, the Conference Board will include an equally weighted average of the Michigan sentiment expectations reading and its own measure. Finally, the capital goods component will be replaced by the one that excludes commercial aircraft.

The new index will start with the December number coming out on Jan. 26, the group said, and readings will be revised retroactively to 1990.

At least a portion of the enormous discrepancy between the LEI and the ECRI weekly leading index (WLI) will be resolved to the downside of the LEI on January 26.