The Chicago Way: Union Boss Collects Pension After One Day on Job

If you need evidence on how corrupt self-serving unions and union officials can be, then please consider Ex-labor chief's 1-day rehire nets $158,000 city pension


A retired Chicago labor leader secured a $158,000 public pension — roughly five times greater than what a typical retired public-service worker in the Windy City receives — after being rehired for just one day of active duty on the city payroll, local news reports said.

According to The Chicago Tribune, Dennis Gannon stands to collect approximately $5 million in city pension funds during his lifetime. He now draws the pension while working for a hedge fund, the Tribune reported.

Gannon, former president of the Chicago Federation of Labor, was able to take a long leave from a city job to work for a union and then receive a city pension based on a high union salary. That arrangement is allowed under a state law signed by Gov. Jim Thompson on his last day in office in 1991, according to an investigation by the Tribune and WGN-TV.

The change has enabled a couple dozen labor leaders to become potential millionaires.

What is different in Gannon’s case is that he became eligible for the especially lucrative pension deal only because the city rehired the former Streets and Sanitation Department worker for one day in 1994, before granting him an indefinite leave of absence, according to the investigation. He retired from the city job in 2004 at age 50.

Gannon’s pension is so high that it exceeds federal limits and required Chicago’s pension fund to file special paperwork with the Internal Revenue Service to give it to him, the Tribune reported.

"I am extremely proud of my many years of service to the city of Chicago and the working men and women of organized labor," Gannon wrote in a statement provided to the Tribune.


The pension came on top of Gannon's union salary, which had grown to more than $240,000. He now draws the pension while working for a hedge fund, Grosvenor Capital Management, that does work with public pensions, including the Teachers Retirement System of Illinois. The firm also was one of Mayor Rahm Emanuel's largest campaign contributors.

Care to see the results Gannon presided over? Please consider Interactive Map of Public Pension Plans; How Badly Underfunded are the Plans in Your State? 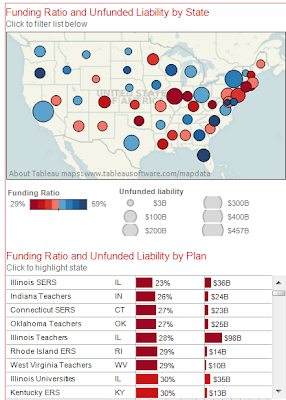 Illinois has the worst public pension plans in the country as of April 2010. I am sure it is still true today. See link for more details.

Gannon says "I am extremely proud of my many years of service to the city of Chicago."

I believe he means one day of service for which he will collect $4 million for ripping off taxpayers for his own personal gain. Yes, that is something to be damn proud of.

For Dennis Gannon to go on leave after 1 day shows this was all planned from the outset. Moreover, by granting the leave, the corrupt Streets and Sanitation Department went along with it all the way.

Any guesses as to how many bribes and payoffs were associated with this chain of events?

It is time to end public unions entirely and all the associated graft.