In a healthy economy, consumer confidence would be 90. Instead it is slightly less than half that.

The Conference Board’s index slumped to 44.5, the weakest since April 2009, from a revised 59.2 reading in July, figures from the New York-based research group showed today. It was the biggest point drop since October 2008. A separate report showed home prices declined for a ninth month.

“This paints a picture of underlying demand weakening,” said Bricklin Dwyer, an economist at BNP Paribas in New York, whose forecast of 45 was most accurate in a Bloomberg News survey. “Consumers are seeing their wealth deteriorate. We’ve seen a huge decline continuing in the housing market. They’ve also been hit on the chin by the equity markets.”

The S&P/Case-Shiller index of property values in 20 cities fell 4.5 percent in June from a year earlier, after a 4.6 percent drop in the 12 months ended in May that was the biggest since 2009.

Today’s confidence report is in line with other figures. The Thomson Reuters/University of Michigan final index of consumer sentiment dropped this month to the lowest level since November 2008. The Bloomberg Consumer Comfort Index has been hovering at levels previously consistent with recessions.

The Conference Board’s data showed a measure of present conditions declined to 33.3, the second-lowest this year, from 35.7 in July. The measure of expectations for the next six months slid to 51.9, the weakest since April 2009, from 74.9.

Fewer respondents in the Conference Board’s survey indicated they were planning to buy a house, while more intended to purchase cars or major appliances in the next six months.

S&P reports Nationally, Home Prices Went Up in the Second Quarter of 2011 According to the S&P/Case-Shiller Home Price Indices.

Bear in mind that number is not seasonally adjusted. In other words, it really didn't happen. Let's look at some details to show why.


As of June 2011, 19 of the 20 MSAs covered by S&P/Case-Shiller Home Price Indices and both monthly composites were up versus May – Portland was flat. However, they were all down compared to June 2010. Twelve of the 20 MSAs and both Composites have now increased for three consecutive months, a sign of the seasonal strength in the housing market. None of the markets posted new lows with June’s report. Minneapolis posted a double-digit 10.8% annual decline; Portland is not far behind at -9.6%. Thirteen of the cities and both composites saw improvements in their annual rates; however; they all are in negative territory and have been so for three consecutive months. 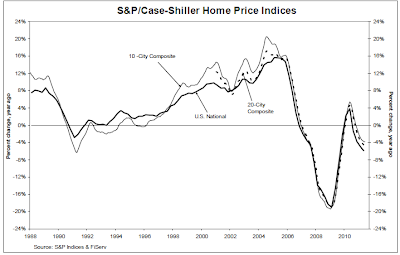 The S&P/Case-Shiller U.S. National Home Price Index, which covers all nine U.S. census divisions, recorded a 5.9% decline in the second quarter of 2011 over the second quarter of 2010. In June, the 10- and 20-City Composites posted annual rates of decline of 3.8% and 4.5%, respectively. Thirteen of the 20 MSAs and both monthly Composites saw their annual growth rates improve, although remaining in negative territory in June.

The National Index was up 3.6% from the 2011 first quarter, but down 5.9% compared to a year-ago,” says David M. Blitzer, Chairman of the Index Committee at S&P Indices. “Looking across the cities, eight bottomed in 2009 and have remained above their lows. These include all the California cities plus Dallas, Denver and Washington DC, all relatively strong markets. At the other extreme, those which set new lows in 2011 include the four Sunbelt cities – Las Vegas, Miami, Phoenix and Tampa – as well as the weakest of all, Detroit. These shifts suggest that we are back to regional housing markets, rather than a national housing market where everything rose and fell together. 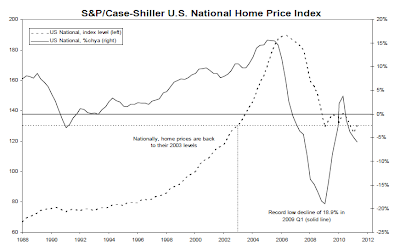 All 20 Cities Down vs. Year ago 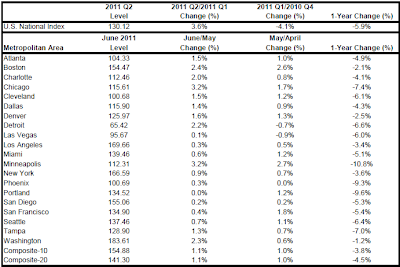 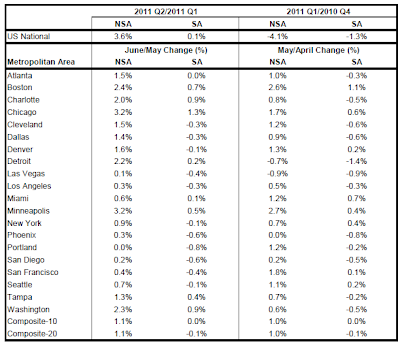 According to a Wells Fargo report, 12 States in Contraction, Alabama in Recession.

The report from the San Francisco-based bank said Alabama was one of 12 states experiencing an economic contraction in July and "likely slipped into a recession."

The report, written by senior economist Mark Vitner and economist Michael A Brown, said more states "are likely to fall into negative territory within the next six months" because of a persistent decline in manufacturing jobs.

Of the 12 states cited in Wells Fargo's report, five were in the South. Joining Alabama were Georgia, South Carolina, North Carolina and Virginia. The other seven states were Michigan, Nevada, Montana, Illinois, Indiana, Vermont, and Alaska.

The amusing thing was Alabama state officials in denial.

Some farm states may avoid a recession this time around, but otherwise a clear picture has emerged: US In Recession Right Here, Right Now