When Will Housing Bottom?

Have housing prices bottomed? If not, when will they?

Not this month, for sure.

Sales of new U.S. single family homes fell for the first time in three months in May, but inventories of new homes for sale reached record lows and the median sales price rose slightly, a government report showed on Thursday.

The Commerce Department said May new home sales fell 2.1 percent to a seasonally adjusted annual rate of 319,000. Analysts polled by Reuters were expecting a slightly slower pace of 310,000 for the month.

The decline ended two straight months of strong gains, with sales rising 6.5 percent in April and 8.9 percent in March. May's new home sales were 13.5 percent above the May 2010 level.

Barry Ritholtz at the Big Picture Blog has recently chimed in on the question, and in response Calculated Risk chimed in. 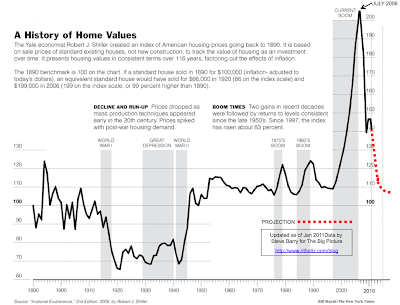 Based on the Upward Slope of Real House Prices Calculated Risk does not think home prices will fall as Barry suggests.

I've argued that "In many areas - if the population is increasing - house prices increase slightly faster than inflation over time, so there is an upward slope for real prices." 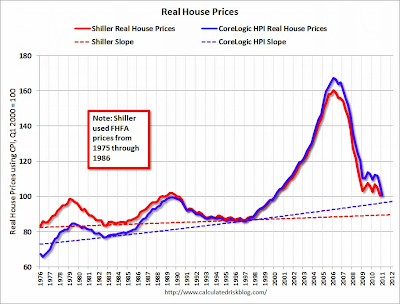 I have been following a different kind of model. 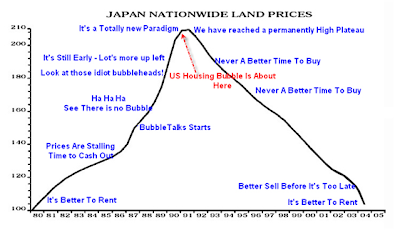 
I called the top of the housing bubble in summer of 2005 based on the Time Magazine Cover "Why We're Going Gaga Over Real Estate" and have been updating the chart ever since, in real time.

When was the US Housing Peak?

Case-Shiller is a lagging indicator. It uses a three-month moving average published with a two month lag. Moreover, Case-Shiller only looks at home resales, not condos.

Resales did not catch the action in cash back schemes, incentives, and fraud.

In summer of 2005 the condo market bit the dust in many places. Also home builders started discounting heavily. Those discounts did not show up in prices for many months, but rather in incentives such as "free" three-car garages, free granite counter-tops, free cars, etc.

Finally, there were massive fraudulent schemes starting in 2005 that overstated home prices, notably cash back to buyers at closing.

Thus, contract prices did not reflect real costs to buyers for numerous reasons, and Case-Shiller did not pick up on that immediately.

Where Are We Now? 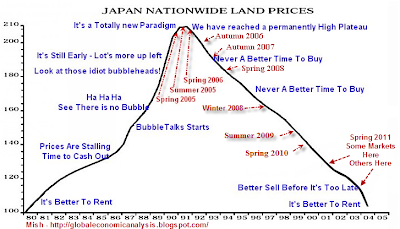 I think housing in some areas is very close to a bottom. Others areas have more to drop.

Based on inventory, shadow inventory, and boomer demographics, home prices are not going up significantly for a long time yet, perhaps a decade, even if they have already bottomed.

There is certainly no reason to rush. Finally, anyone with any uncertainties regarding their employment has no business even thinking about buying now.


The following charts are from a friend who goes by the name "BC". 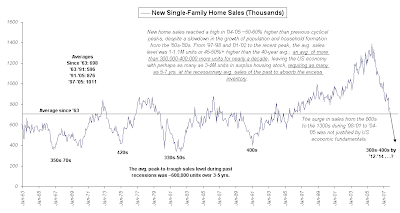 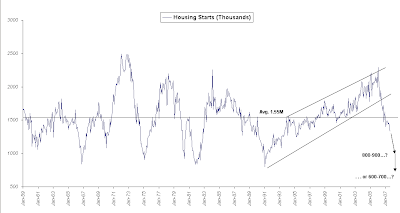 Those looking for a housing bottom anytime soon are likely to be disappointed.

Please compare the above projections with recent charts by Calculated Risk. 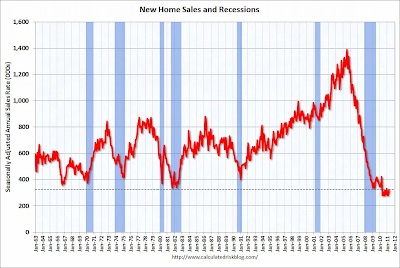 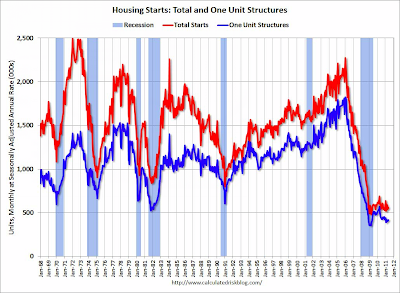 While searching for my housing bottom link from 2007, I stumbled across Rebuttal To SmartMoney Housing Bottom Call from May 2008.

Today home prices have fallen so much, mortgage rates are so low, and personal income is so high — that homes are more affordable today than at any other time, ever — with mortgage payments on the average home eating up about 40% of income.

With houses more affordable than ever before, why should we expect prices to fall much further from here?

Let's put it in concrete terms — jobs. Since the housing market started coming apart two years ago, jobs in the housing sector — broadly construed, to include everything from bricklayers to mortgage brokers — have already declined by over 1.5 million. That's about 1% of the whole national labor force, and it takes housing employment back to where it was in 2000 before the so-called "housing bubble" even got started. Which begs the question: How many more jobs are there to lose in this sector?

When I proposed 2012 as a possible bottom way back in 2007, many people thought I was out of my mind. Certainly Luskin must have felt that way.

Well, here we are, six months away, prices falling fast, and the economy likely headed for another recession.

2012 may still be an optimistic target for a bottom but we are certainly closer to the bottom now than we were than we were in 2007 or 2008.