If you want to stick it to speculators, the best way to do it is to wait until sentiment is extreme, then hike margins right before bearish supply data. That is precisely what has happened.

Today we see Oil Drops Below $100 as U.S. Supplies Surge

Oil fell below $100 a barrel in New York and gasoline tumbled the most in more than two years after an Energy Department report showed that U.S. supplies surged and fuel demand slipped.

“We have a tremendous glut,” said Todd Horwitz, chief strategist at Adam Mesh Trading Group in New York. “The rally in commodities appears to be over. We’re going to see prices work their way lower in coming weeks.”

CME Group Inc. suspended trading of gasoline, crude and heating oil on the Nymex for five minutes starting at 12:06 p.m., said Laurie Bischel, a spokeswoman for the exchange in Chicago. Trading was stopped after June-delivery gasoline fell 25 cents, the daily limit. Limits were widened to 50 cents a gallon for gasoline and heating oil and $20 a barrel for crude.

Crude futures fell sharply in Asia Tuesday as traders responded bearishly to an announcement by CME Group Inc. (CME) of an increase in margin requirements for oil contracts, which could force speculators and small retail investors to close out positions.

The decline followed a sharp 5.5% upward rebound in Nymex crude overnight, as flooding and problems at a Mississippi refinery helped the market to claw back some of the previous week's losses.

The benchmark West Texas Intermediate light, sweet crude oil futures contract maintenance margins will increase from $5,000/contract to $6,250/contract effective at the close of business Tuesday, May 10, Chris Grams at CME Group told Dow Jones in an email. The move was CME's third increase in 2011.

US Oil Production Up

Please consider the Short-Term Energy Outlook, May 2011 from US energy Information. 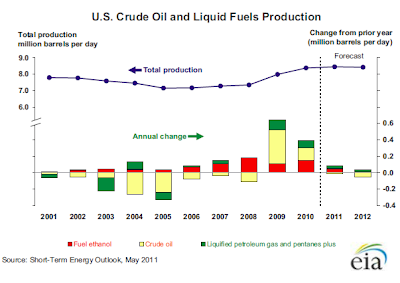 That is one of ten pages of charts in the PDF.

Fascinating, eh? Domestic production is UP, as imports are also down. The other side of the USA usage puzzle that no one seems to notice is the increase in exports of finished product since the peak consumption year of 2007. As we have consumed less internally we have exported more.

Other factors coming into play bring the number to the 13.3% down my charts currently show.

Speculation a Symptom of Larger Problem

It might feel good to go after speculators, but speculation is only a symptom of the problem.

The real problem is central bank policy (Fed and Central Bank of China) that is far too loose. In 2006, loose money fostered housing speculation, now it fosters commodities speculation.

Growth in the UK is slowing, however, inflation as measured by consumer prices is not. The same holds true in China, and the US.

The pound gained versus the dollar and the euro after the Bank of England said it sees inflation “markedly higher” in the near term, boosting speculation that borrowing costs will rise from record low levels. Gilts slumped.

Sterling advanced versus all but one of its 16 major counterparts, snapping a two-day decline against the shared European currency. “There is a good chance that inflation will reach 5 percent later this year and it is more likely than not to remain above the 2 percent target throughout 2012,” the bank said in its inflation report today. Risks to economic growth are “skewed to the downside,” the report added.

“People are bringing forward their predictions of when the BOE will make its first move on rates; that’s making sterling look like a reasonably sensible buy at these levels,” said Simon Derrick, chief currency strategist at Bank of New York Mellon Corp. in London.

The Bank of England signaled Wednesday that its key lending rate is likely to rise before the end of the year in order to bring inflation back down to target by 2013.

The central bank lowered its outlook for growth, but raised its inflation expectations in its quarterly inflation report.

The report, which lays out the rate-setting Monetary Policy Committee’s economic assumptions, warned that inflation could hit 5% by the end of the year and “is more likely than not” to remain above the 2% target in 2012. The bank said its near-term inflation profile was “markedly higher” than in February.

The BOE’s King acknowledged rates will likely need to rise in the next two years, but said the high level of uncertainty surrounding the outlook for both growth and inflation made it difficult to gauge when a move would come.

Excluding Japan, mired in deflation for decades, the Fed remains the only Central Bank unconcerned about "inflation".

The irony in this mess is that Central Banks purport to want to do something about inflation when they are the cause of it.

You can email John Ransom at thfinance@mail.com