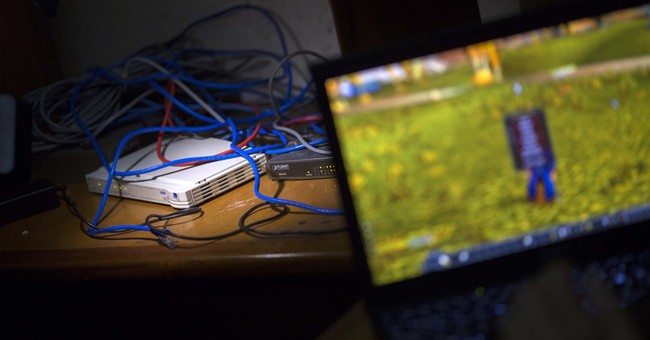 The interwebs are now, officially, considered a “public utility” according to the Federal Communication Commission. After two weeks, the FCC has finally released its 400 page plan to regulate the internet. (I’d say something snarky about this, but I honestly don’t know whether or not that’s still allowed… And, as a follow up: Do you really think it takes 400 pages to ensure an “open and free” internet?) Naturally, the next step would be for government to begin subsidizing internet service to potential Democrat voters low income citizens. According to the National Journal:

The Federal Communications Commission plans to soon begin working on a proposal to subsidize Internet service for low-income consumers by expanding its Lifeline program, which is mocked by conservatives as the "Obamaphone" program.

Wait… I have an idea: We can set up some sort of a federal exchange or marketplace. Maybe some DC bureaucrats can determine what “adequate” internet service is, and mandate that every citizen purchase a minimum amount of broadband capability?

All three Democrats on the five-member commission have publicly said they want to use federal money to help ensure that all Americans can afford to get online. Lifeline—which despite the Obamaphone nickname was created during the Reagan administration—currently subsidizes only phone service.

Gosh, they make it sound so harmless. I mean, people are only getting iPhones and Androids through a federal subsidy program originally set up to facilitate landline accessibility for low income America. What’s the big deal? Oh, and by the way, this is why it’s called “Obamaphone”:

Even supporters of the $1.7 billion program admit that it has been plagued by fraud and abuse. The FCC and the Justice Department have tried to crack down in recent years on companies scamming the program.

Here’s the problem: The entire system works much like Hillary Clinton’s “voluntary” surrender of official emails… It’s on the honor system. Most companies (I’m looking your way, AT&T) basically get to determine for themselves whether or not someone is eligible for the subsidy. And, funny enough, the rest of us suckers who actually pay for our own iPhones get to fund this wonderful telephonic redistribution scheme through various fees and taxes on our phone bill.

But, that’s okay; because the FCC is confident they can suddenly expand this welfare program without expanding the burden consumers are already shouldering. After all, if government is good at anything it is expanding programs while restraining budget growth, right?

In all fairness, internet service is becoming more of a modern day necessity than a luxury. But Republicans have already called for expanding low-income accessibility to the world-wide interwebs, while reducing the waste-plagued Obamaphone programs.

Of course with Net Neutrality being accepted, and internet service being deemed a ‘public utility’, it won’t take much for the FCC to suddenly decide that a couple of fines and fees are in order to fund their latest entitlement handout. So, for anyone who still seems to believe that 400 pages of FCC regulation are harmless and benevolent, go look at your latest cell phone bill. All those fees and taxes were not enacted overnight. As it turns out, regulating industries into the ground costs quite a bit of money, and government agencies have a penchant for raising capital from America’s middle class. Now the FCC has the authority to tax your internet connection for whatever charitable scheme they ultimately devise.

Although, if you’re one of the millions of newly impoverished Americans (thanks Obamanomics) there is a silver lining: You might soon be able to get your own “ObamaModem.”

Conservative Women Are the Happiest People in America: Any Guesses Who's Unhappiest?
Redstate
"Consensual incest" should be decriminalized, advocates say – HotAir
Hotair