Obama Claims He Learned About Hillary’s Emails “Through News Reports” 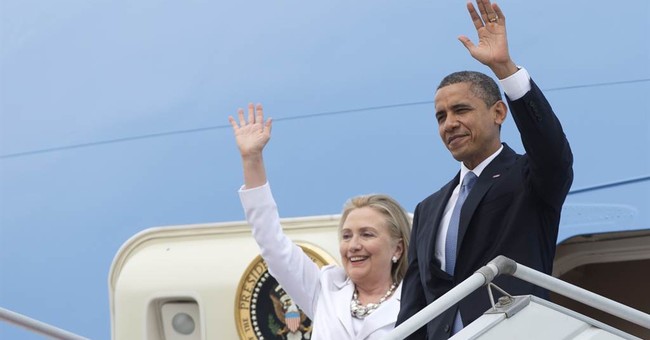 This White House actually seems to believe that incompetence and cluelessness is a valid excuse for misbehavior. Asked when he first learned of Hillary Clinton’s use of a private email system as Secretary of State, the President responded with his tired line of having learned about the latest scandal “through news reports”. I’m beginning to think the guy wasn’t even aware he was elected President until he saw himself taking the oath of office on the nightly news.

Also: Captain Renault was shocked to discover that Rick’s café was home to illegal gambling.

It kinda makes you wonder if the Community-Organizer-in-Chief actually does any sort of organizing within his own executive community. Of course, the feigned ignorance is a little hard to accept at face value. I mean sure, the President spends a lot of time on the golf course, and reading from the teleprompter… But surely somewhere along the lines Hillary sent an email to someone in the White House from her HDR22@clintonemail.com account. Is the Administration actually expecting me to believe they just never noticed the fact that Hillary’s domain wasn’t the typical “State.gov”? (I’m assuming this is because Hillary was nicknamed as “Hildebeest” in everyone’s address book.)

Even the official Press Jester, Josh Earnest, insisted that four years of private emails from Hillary was somehow a stunning development to the White House:

Of course, that’s not exactly accurate. After all, Josh was informed in 2013 that Hildebeest had a private email for official business. (As a side note: It’s worth noting that Gawker magazine managed to ignore this accidental moment of potential journalism. Apparently a friendly “heads up” to the Obama Administration was a better business choice than actually reporting a piece of relevant and consequential news.)

Valarie Jarrett also decided to throw Clinton under the bus, claiming that she had no idea the former Secretary of State declined to set up a State.gov email account:

Of course, none of this is terribly surprising. Obama didn’t know about Fast and Furious until the newspapers reported it. He didn’t know about the IRS targeting scandal until he saw it flash across the screen of his favorite evening news program. He didn’t even know much about the events surrounding Benghazi until he checked his BlackBerry’s news app while on the golf course. (I’m assuming.) And now we’re being told that he was unaware of his Secretary of State subverting consequential and basic transparency regulations.

It’s a fairly sad narrative when the only feasible way of saving face is to claim gross ignorance and incompetence. Even if we suspend all skepticism for just a moment, and actually entertain the possibility of White House ignorance regarding Hillary's emails, it paints a rather embarrassing portrait of executive competency. I guess America’s top diplomat never communicated with anyone of consequence in the White House. And if she did, I guess “the most transparent administration in history” (words are obviously pretty cheap) never felt like bringing this little policy violation to anyone’s attention.

With this Administration, the buck never seems to stop with Obama. Apparently he’s far too interested in redistribution to keep any blame for himself.