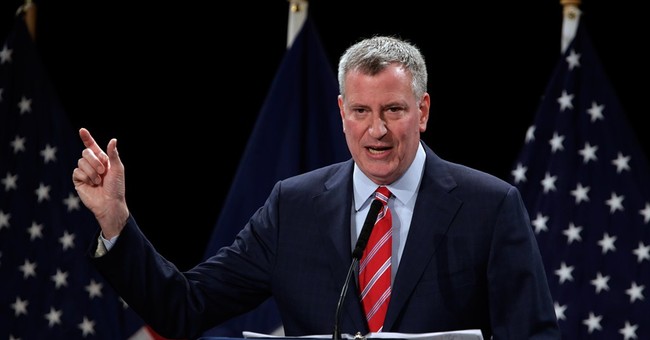 Mayor Bill de Blasio (Communist Progressive – NYC) is rushing to the defense of his former employer, Hillary Clinton, who is in hot water for violating Federal requirements that official email correspondence be conducted on government servers. After all, birds of a crony-progressive feather should always flock together.

At issue is Hillary’s somewhat Bond-villain decision to build her own email server in her lair in Chappaqua, rather than bother with those pesky government servers. And to a certain extent, can you blame her? I mean heck, there is a reason healthcare.gov wasn’t exactly a rousing success. Can you imagine those same folks being in charge of national security emails?

Then again, there is also a reason for the government-only policy for email correspondence. In the event that an investigation is instigated (for example: unfair political targeting by IRS officials), emails would be readily accessible to members of the investigating party. (Well… Maybe that’s a bad example. But at least that’s the idea.) As it currently stands with Mrs. Clinton – who is being investigated over the death of the American ambassador in Benghazi – subpoenas and FOI requests are basically at the mercy of the “honor system”. And, let’s face it, we are talking about the Clintons. (I’m sure I could run through a list of scandals, but really “what difference does it make” at this point?)

Of course there’s also the issue of security. At least with government email, there’s a basic level of standard protocols in place for the transmission of sensitive information. Oh sure, the State Department says she never sent any classified or sensitive information from her private email HDR22@ClintonEmail.com, but are we really supposed to buy that line? Did she do all of her top-secret clearance communication via carrier pigeons, or what?

Even the White House has essentially thrown her under the bus. Valarie Jarret and Josh Earnest both insisted that they were unaware of her communicating via email with anyone in the White House. Also, unicorns were largely responsible for carrying coded messages between Obama and his Secretary of State. And yet, Bill “I heart Hillary” de Blasio played defense for the former Secretary of State to reporters in an unrelated appearance in New York City.

He explained that Mrs. Clinton is “one of the finest public servants this country has produced” and “a person of extraordinary integrity.” No obvious tells of satire or sarcasm were apparent in his remarks. Apparently he actually thinks people will believe what he says about her. He continued by pointing out that “It’s not a great secret I have immense respect for Secretary Clinton… To me it’s quite clear that measures were taken to comply with the letter and the spirit of the law, and I respect that.”

Also: Some animals are more equal than others. (Oh yeah… She ousted an ambassador for using his Gmail account. Clearly, he should have asked to use Clintonemail.com as his domain.)

In the world of Clinton & Co, following the “letter and the spirit of the law” means setting up multiple private emails on a home-brewed server, rather than abiding by the plain-language regulations requiring government sponsored email accounts for public business. It’s almost like cronyism is more important to the Communist Progressive Mayor of New York City than integrity and compliance with the law.

Then again, this might just be another example of the far Left NYC Mayor defending a family that is climbing their way out of poverty. Good for him.