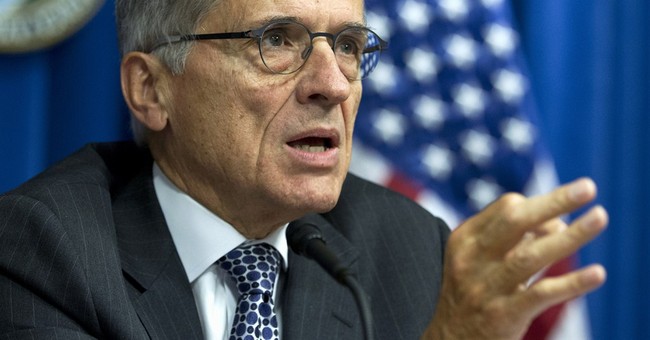 How predictable… The Federal Communications Commission voted on strict party lines to adopt Obama’s 332 page “Net Neutrality” proposal. Given that everything the government touches ends up as a rousing success-story, I’m sure you’ll be able to keep your internet if you like your internet. According to Fox News:

The commission, following a contentious meeting, voted 3-2 to adopt its so-called net neutrality plan -- a proposal that remained secret in the run-up to the final vote. On its surface, the plan is aimed at barring service providers from creating paid "fast lanes" on the Internet, which consumer advocates and Internet companies worry would edge out cash-strapped startups and smaller Internet-based businesses. Chairman Tom Wheeler said it would ensure an "open, unfettered network."

Of course… Because if there is one thing the government is known for it is protecting truly free markets, right? At issue is a concern that service providers might unfairly target certain companies for preferential (or discriminatory) treatment. However, I can’t help but notice that this is largely a problem that doesn’t actually exist. Apparently the big government fanatics over at Obama’s FCC believe it is prudent governance to restrict freedom because someone might (someday) abuse it.

How terribly Orwellian. I think George Washington is credited with a quote about such overzealous governance:

"It will be found an unjust and unwise jealousy to deprive a man of his natural liberty upon the supposition he may abuse it."

Democrats fear that a lack of competition within the industry is leading to monopolistic injustice; and evidently believe that slapping a 21st century technology with rules designed for rotary telephones, will somehow level the playing field. (I call it socialism for broadband… Let’s make sure everyone has equally atrocious internet service.)

On almost every level, the proposal seems to be a solution in search of a problem. While the Liberals at the FCC opine about too few service providers, it’s probably worth pointing out that affordable access to the internet has been growing exponentially for years. Over the course of the last 20 years, the internet has become more accessible, substantially faster, and profoundly more user friendly. In today’s America, quality access to the web is almost considered a given. Heck, even remote corners of rural America tend to have Wi-Fi hotspots at local coffee shops, public libraries, and public schools. And almost anyone in America can get their hands on a web-enabled smartphone.

Moreover, it should be worth noting that “competition” isn’t exactly suffering among service providers. While certain companies might have relative control over small geographical areas, innovation has been shifting the balance of power for the last few decades to more dynamic competitive methods of delivering the internet. (Remember when cable providers weren’t the ones who you called to get hooked up to the interwebs?)

America’s transition from dial-up, to DSL, to cable, and now to fiber, seems to demonstrate that competition and innovation are alive and well within the industry. As a result, the consumer is routinely introduced to new and improved methods for watching Netflix and checking their status updates. Accessibility to quality service has never been greater, and as a result the richness of the internet has fundamentally impacted the way Americans interact with the world.

Due to such stunning advancements in accessibility, the internet has become the largest democratizing machine for information since moveable type. The internet is an entertainment hub, a news source, the world’s largest library, a communication device, a soapbox, and a conduit for information. This great explosion in tech, industry, and democratized accessibility did not happen because of government “oversight”… It emerged due to government’s general inability to regulate, tax, and control the 20th century’s most influential contribution to human discourse.

And now Obama’s FCC will get their bureaucratic hands on it in an effort to fix an injustice that doesn’t even seem to exist. In an effort to ensure an “open” internet, the FCC will impose upon an already-unfettered marketplace regulations originally written for telephone companies in the 1930s. If you like your internet as it is, you’re probably in luck… Nothing will be changing anytime soon with the FCC breathing down the necks of would-be innovators. After all, there’s probably a reason that our home phone service has remained largely unchanged while the unregulated interwebs have become an exponentially growing marketplace of ideas and innovation.

Far from being “progressive”, Obama & Co seem dedicated to clinging to an early 20th Century model of centralized power, and restricted free-market advancement… All in the name of preventing an abuse that hasn’t even materialized in the real world.

In fact, the term “progressive” is almost as misleading as the term “Net Neutrality”.