Changing Out “No Gun” Signs for “No Jihad” Signs 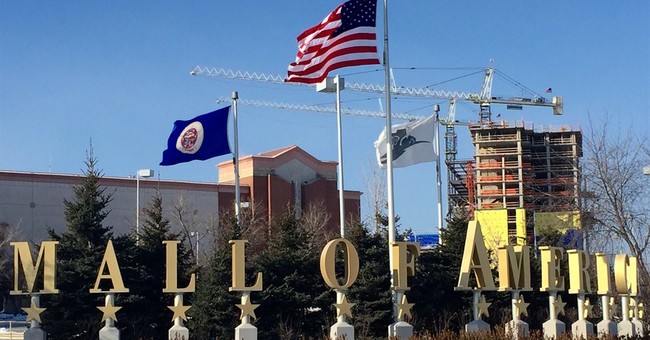 Following a terror threat from Al Shabaab, the Mall of America has reposted signs reminding patrons of the shopping center's “no gun” policy. Yeah… Welcome to the new America: Where bigger “no gun” signs are considered an adequate anti-terror policy. Someone should fill Copenhagen and Paris in on our strikingly crafty strategy to fight radical Islam.

And, yes… The Mall of America is a gun-free zone. Samuel Colt’s .45 caliber marvel may have helped us win the West, but you have to leave it at home when you go to The Gap.

Personally, I think the mall should forget about the “no-gun” signs, and just put up some “no-Jihad” signs. That ought to do the trick. In fact, maybe we can send a couple extra signs to the Baghdad security forces in lieu of rifles and ammunition. Maybe if we just put up a couple of “no ISIS” signs throughout the Middle East, we’ll be able to finally contain those non-Islamic members of the Islamic State.

Heck, perhaps Kerry should make a “no-Nukes” sign a non-negotiable condition for our talks with Iran.

Wait… Has Ukraine heard about the magical (and disarming) power of the sign?

Of course, the Mall of America’s strategy makes perfect sense. Mall cops with pepper spray (and rape whistles) are clearly a better defensive mechanism than allowing a trained (and law-abiding) citizen to play policeman. Right? Sure, roughly 2 million crimes are stopped every year with lawfully owned guns, but we don’t really want that kind of shenanigans at a place with innocent civilians, do we?

No… It would be much better for the average citizen to scramble to safety as some psychopathic terrorist-sympathizer wanders into the mall with an AK-47. Besides, guns are clearly not the solution to any potentially lethal confrontation. That’s why victims of violent crimes usually call 911 in hopes of contacting Buddhist monks rather than an armed police officer, right?

If you’ve made it this far, thanks for bearing with my over-indulgence in the art of sarcasm. America’s childish addiction to the hope that criminals will begin obeying signs that politely request their disarmament, is beyond my ability to counter without some degree of incredulous indignation.

After all: criminals, by their very nature, have a tendency to ignore the protocols for existing in a civil society. Generally speaking, individuals interested in killing innocent civilians are not terribly preoccupied with the legality of carrying their weapons to the crime scene. So while the honest and vulnerable leave their arms at home, wannabe Al Shabaab Jihadists will be blessed (by Allah?) with a completely defenseless gallery of victims and infidels.

I guess I’m weird for kinda wishing one of those infidels would have the ability to return fire.

But, the Mall of America has every right to set their own rules. And armed Americans have every right to start shopping for their fashion-forward items online instead of in a victim-rich environment.