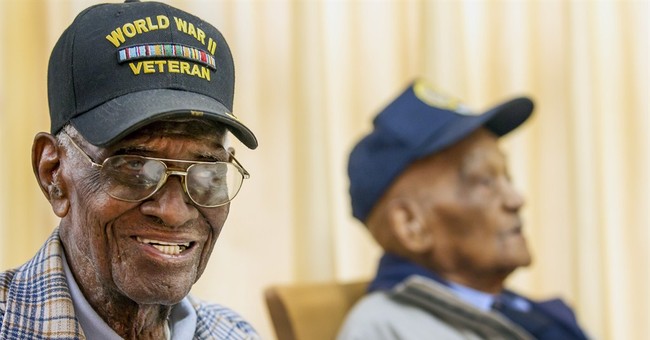 Well… It’s settled. I have a new hero. Oh, sure, Superman was pretty cool, until he renounced his US citizenship. (I’m still waiting for Tony Stark to do something about that.) In the end, I thought that maybe I should ground myself in reality, and find a real-life hero whom I can admire.

Richard Overton is a 108-year-old World War II veteran who served at Pearl Harbor, and fought in both Okinawa and Iwo Jima. But, let’s just pretend that wasn’t enough to make you forget your admiration of some reality-TV pop star… He also smokes 12 cigars a day, loves guns, and drinks whiskey with his coffee every morning.

At a 108 years old, he’s not interested in changing his whiskey-soaked (cigar smoking) ways. And, really, why should he? Heck, if he had never smoked or drank before, I’d suggest that 108 is a pretty good age to pick up the habit. Richard still has a driver’s license, a car, and one heck of a life story. According to the Austin American Statesman:

The centenarian still lives in the house he bought when he returned from World War II, still drives an old Ford truck and a Chevy Monte Carlo and still helps "transport widows to church."

In fact, he’s everything I imagine a WWII vet to be: Tough, tenacious, polite, and completely devoted to enjoying his freedom.

And I’m not alone in my adoration. Both the President of the United States, and the Governor of Texas have taken time away from governing (well… Obama took some time away from the links) to recognize this man’s incredible life.

But, the truth is, most of us already know a Richard Overton in our life. I remember being five years old, dunking my doughnut in coffee with my impossibly-old grandfather. (He was 69 years old. And, yes Mom, Papa let me have coffee.) He had been a bombardier in the flying fortresses in World War II, and I still have the money clip he bought as souvenir in Europe.

I know people who have been shot at in Afghanistan, targeted in Iraq, and wounded in Vietnam. I knew a POW from WWII, and a veteran of Korea. My wife’s grandfather stormed the beaches at Normandy.

The truth is, I know plenty of Richard Overtons. And, it’s likely you do as well.

True: They’re not all cigar-smoking, gun-loving, centenarians with a habit of early-morning whiskey consumption. But they’re all brothers in the fraternity of heroes. (Even if they refuse to affix that term to themselves.)

And please consider sending Richard a box of Arturo Fuentes.