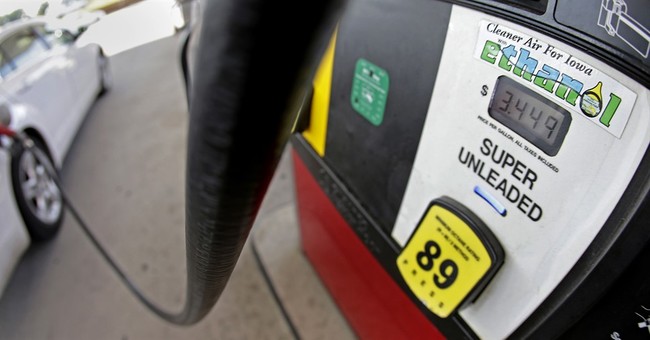 Obviously, the food stamp program was designed to help the poor right? Wrong. It was initiated during the Great Depression to raise crop prices. And who suffers the most from higher food prices? Right, the poor. But that was way back in the ‘30s and it’s understandable that those origins have been forgotten.

Likewise for ethanol:   A blend of gasoline and alcohol usually made from corn. It began benefiting from subsidies and usage mandates in the 1970s and keeps growing despite efforts of practically everyone except politicians, ethanol processors, and corn farmers. (Everyone includes me: It was one of my first two cover articles back in 1987) Originally hailed as a way of extending the nation’s fuel supply in the wake of the Arab-induced oil shocks, consider that the U.S. is now producing and exporting more petroleum than ever. And those Arab nations need our arms more than we need their crude. Try drilling for F-35s.

But, you see, ethanol uses 40% of the nation’s corn output, receiving $106 billion in federal subsidies just from 1995-2016. It’s therefore a tremendous price support program. Now it’s set to grow even tremendouser as President Donald Trump has proposed further expanding the program that could dramatically increase ethanol usage. He’s doing it to counter the counters to tariffs he’s imposed – in other words the kind of economic micromanagement we normally expect liberals to favor.

And it’s all for a handful of recipients (there are only about 2,000 US corn farms) at a time of soaring deficits and debts.

The White House has issued a directive changing the current Renewable Fuel Standard Mandate allowing a 15% blend to be sold all year, rather than only during the summer months in most of the country. Because standardization is much easier, that restriction has kept almost all ethanol blending at the 10% level allowed year-round. A full shift to E15 would mean up to 50% more corn soaked up by ethanol and hence that much more in subsidy payments.

Ethanol supporters have pushed for this for years. So why are they getting it just now? (Assuming no successful lawsuit against the EPA to block it.)

U.S. corn farmers (as well as many other crop growers) have been devastated by the retaliation against Trump’s tariffs, including a whopping 25% corn levy imposed by China. This has made the GOP decidedly less popular in the Midwest with mid-term elections weeks away. Even before that U.S. farm income had fallen about 50 percent since 2013 and is forecast to decline 6.7 percent this year, or the lowest level in nominal terms since 2006, according to USDA estimates.

So Trump is seeking to placate sufferers with massive bailouts. Indeed, in August the Agricultural Department announced it would make up to $12 billion in direct payments and purchases and was currently prepared to dole out half that. That’s about $85 per taxpayer.

But huge new direct transfer payments from the many to the few, as opposed to transfer payments that have been around a long time and most people don’t even know about (like food stamps), raises eyebrows. Especially given that a major portion of this year’s increased spending went to agricultural programs, a 7% boost. (As in, US agriculture receives about $20 billion annually in price support, according to the CATO institute. Ag Secretary Sonny Perdue said in August, farmers would prefer “trade not aid.” But in lieu of that, we get hidden aid.

Fact is, “extending our gasoline supply” never had any basis in reality anyway. You see, while it’s true that all energy requires energy to produce, ethanol is especially bad in this regard. It requires massive inputs in terms of sowing the crop, producing and applying fertilizer, applying pesticides, harvesting, drying, and finally distilling. With petroleum you essentially just drill or frack and drill.

Now add that a gallon of ethanol has about two-thirds the energy content of a gallon of pure motor gasoline. Some researchers have claimed you actually put more energy into producing ethanol than you get back. It depends on a lot of variables. But even the most optimistic estimates are that ethanol only produces about 60% more energy than production consumes. You have to do much better than that to make a profit; hence ethanol is always produced at a loss and absolutely requires subsidies and mandates.

Meanwhile, of course, to subsidize something is to get more of it. Ethanol supports sent corn production levels soaring a lot higher than an elephant’s eye. So we’ve inadvertently tremendously overstimulated the market; now with other countries undercutting post-tariff corn prices there’s just no place to store the stuff.

Hence the “need” to soak up even more with ethanol. Forty percent of corn-raising land can only partly be switched to other, less profitable, crops. And some of those, like soybeans have also been slammed by counter-tariffs. It’s a tarrif-ic nightmare. Some farmers are going to have to foreclose without an expanded ethanol market; others take severe profit losses.

Which is sad, but it’s also something called “capitalism.” Products and companies and individuals fail all the time, but only those with super lobbying power get access to the big teats. And mind, those farmers will still have their land to sell. If Robby the Robot takes your job tomorrow, what sellable work assets will you have?

As far as impact on the country as a whole, a 2016 analysis found “As a share of the total U.S. economy, the farm contribution was less than 1 percent and the lowest level since the series was first recorded in 2007.” For corn only, of course, the figure would be even smaller. Sure, it’s a vital industry but allowing those who cannot profit at it to fail would not harm the nation.

Meanwhile the petroleum companies, which have also been socked by Chinese 25% counter-tariffs, aren’t too happy about their prime competitor getting yet more government aid. The real threat to U.S. petroleum?

They have indirectly expressed this by noting that E15 is harmful to many cars on the road, especially older ones, not designed to handle the corrosive effects of ethanol. But so long as gas stations post signs and car drivers are careful and E15 doesn’t almost totally dominate the market, that shouldn’t be disastrous. Then again, E15 may come to totally dominate the market.

What’s wrong with the oil industry just saying the ethanol program has always robbed taxpayers and oil company shareholders? Meanwhile, they’ve gotten strange bedfellows with environmentalists who note that levels of ground level ozone, one of the six major EPA pollutants, must rise with increased use of E15. Ethanol “bakes” in hot weather, creating ground-level ozone. Ozone can aggravate lung diseases such as asthma, emphysema, and chronic bronchitis and cause chronic obstructive pulmonary disease, among other things, according to the EPA.

Hence the EPA warm weather ban. Yet some studies have found that E15 also increases ozone emissions at colder temperatures. Ozone aside, a ranking of nine energy sources in relation to global climate found that E85 corn-based ethanol (E85) were ranked last of nine technologies with respect to climate, air pollution, land use, wildlife damage, and chemical waste

Ethanol lobbyists have struck back by claiming ethanol saves us money because it’s currently less expensive than pure gasoline. Sorry; no go. That’s because of the subsidies. Americans pay in income taxes for that lower price. Moreover, because ethanol contains less energy per gallon, E10 cuts your mileage and E15 cuts it even more.

Oh, and in case you were wondering, no the ethanol lobby won’t be satisfied with a move to only E15. They’re actually already pushing E30!   And why stop there?

So first ethanol caused tremendously harmful market distortions. Then so did tariffs. And now we’re suffering a combination of the two. President Trump is placing a finger to cover this leak, and then a toe to cover the new leak and so on. And as the world has been learning since 1917, such economic micromanagement just doesn’t work. The only solution to this Gordian knot is to slash right through it. Eliminate the tariffs that caused the current crisis. And while we’re at it, eliminate both subsidies and mandates for ethanol.

Let’s leave the effort of never-ending fixes for fixes to other governments. Like, say, Venezuela.

Michael Fumento is an attorney, author, and journalist who has been writing on ethanol for over 30 years – and having absolutely no evident impact! He has no financial interest in any energy or agricultural field. (Ugh. No pun intended.)