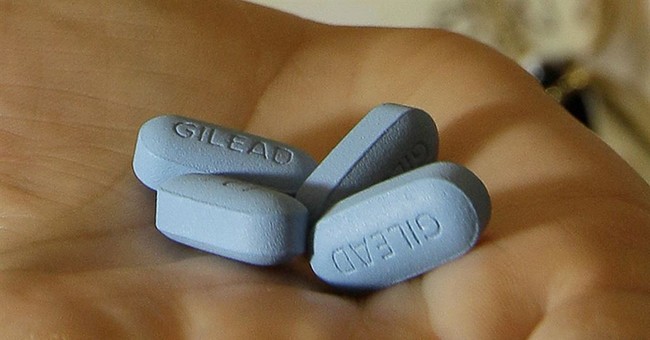 STD rates are shooting up according to the Centers for Disease Control and Prevention (CDC), as headlines reflect.

CNN’s article is accompanied by one of those obnoxious autoplay videos showing white heterosexual couples skating and walking while holding hands. (Are these potential risk factors for spreading STDs? Hmm…)

Mind, this is a truly serious problem. All of these STDs can cause serious health problems. And gonorrhea has become resistant to nearly every class of antibiotic we've used to treat it, except for one.

But nobody seems very eager to explain why. Instead, as with AIDS 30 years ago when I first started writing on the subject, there seems to be a serious effort to democratize the disease.

The “invisible gorilla`,” that which should be obvious but nobody seems to see, is that it appears that almost the entire rise isn’t due to heterosexuals (much less holding hands or skating) but to homosexual males. In any case, the democratization is also spread across racial and ethnic groups.

Fact is, STDs have a tremendous correlation with both race and ethnic groups and sexual preference. Yet the data behind this latest mini-hysteria is a simple CDC table that has no breakdown for race or ethnicity. And only for one disease, syphilis, is there a separate category for homosexual males. But go to the CDC’s Website and there “hidden” in plain view is the reality, with one page tendentiously titled: “STDs in Racial and Ethnic Minorities.” It informs us:

Simply put, for all four of the categories the pattern is the same: Blacks highest, then Latinos, then whites, then Asians. Likewise for HIV/AIDS. But, see, that might be interpreted as saying that blacks are more promiscuous or careless or something negative. So we need to keep the data buried.

As for homosexual males, the disparity just blows you away.

For example, they account for over 80 percent of primary and secondary syphilis cases. Further, this is where we’re actually seeing that worrisome upward trend. Gonorrhea rates went from about four percent in this group in 1980 to about 35 percent now. Yes, more than a third of homosexual men who go to STD clinics for testing are positive for this hard-to-treat disease and making it therefore all the harder to treat. “In 2014, gay and bisexual men made up an estimated 2% of the U.S. population, but accounted for 70% of new HIV infections” according to the CDC.

Meanwhile, even as the media wax wroth over the decline in condom use in heterosexuals, CDC data show no such decline. Homosexual men? That’s a different story.

Since the introduction of a combination of drugs shown highly effective in preventing HIV if taken regularly, it appears these men are now eschewing “wearing a rubber sheath over their old fellas” as a Monty Python movie put it. So they’re protected against AIDS but no other disease. Groan all you want; but there’s a certain logic to it.

So as the media and the “experts” they quote regarding record-high detected STDs either remain ignorant or at least want us to remain ignorant that it’s overwhelmingly a problem of blacks and homosexual men. Definite flashback to AIDS in the ‘80s when we saw such headlines as “The disease of them is suddenly the disease of us” and people like yours truly were called homophobes and racists for citing the actual data.

None of this is to say blacks and homosexual men don’t count. To the contrary, if you’re going to deal with a problem you have to isolate it first. You know: breast cancer and women, prostate cancer and men, that kind of stuff.

Yet it’s not only political correctness that’s driving this misinformation bandwagon. Just as democratizing AIDS brought in vast amounts of money to HIV/AIDS groups, democratizing the worsening STD programs has the same promise. “We’ve seen a tremendous increase in many areas primarily due to the eroding public health infrastructure,” Michael Fraser, executive director of the Association of State and Territorial Health Officials, told NBCNews.com.

These are cultural problems, not ones of ignorance. And changing a culture is tough, especially when you pretend all cultures are equal. The alternative is to admit the reality, that cultures are different and in some ways superior or inferior.

Not coincidentally, the rates of STDs among the various racial and ethnic groups parallel their rates of children born out of wedlock, with blacks coming in first, then Latinos, then whites, and then Asians. To the extent any public programs against STDs will work, they must be targeted – precisely because budget cuts or no resources are always limited. You put more police where there’s more crime.

Yet ultimately we must concede that STDs are a lifestyle disease like obesity. Nobody wants to be obese, but they do choose to engage in behavior that makes them that way. Just as anti-obesity efforts have been a failure throughout the world, it seems there’s little hope of reducing STD rates through education. But what hope there is – political correctness be damned – would seem the best tool we have to offer.

Michael Fumento is an attorney, journalist and author including The Myth of Heterosexual AIDS and The Fat of the Land and has been writing about STDs generally for over three decades.