Is Inflation Coming Back?

“Government is the only agency that can take a valuable commodity like paper, slap some ink on it, and make it totally worthless.” — Ludwig von Mises

Last weekend, I was in Miami to give a talk on “Modern Monetary Theory,” and had dinner with Bill Beach, the director of the Bureau of Labor Statistics (which puts out the Consumer Price Index and the unemployment statistics). 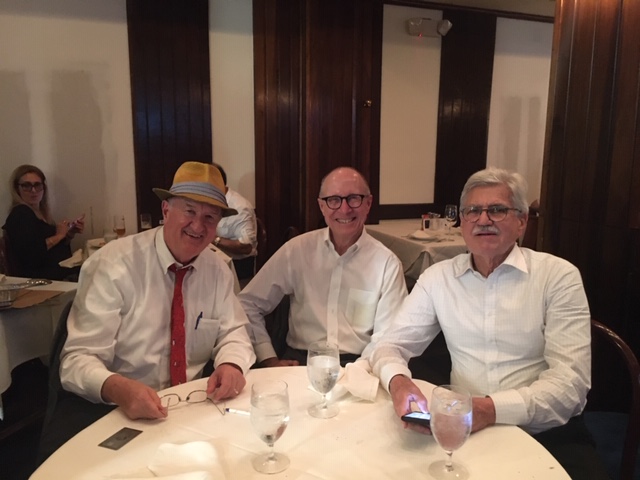 Beach told me that the Consumer Price Index (CPI) now monitors 24,000 different prices. In the past year, the CPI rate has been 1.7% — less than the government target rate of 2%. Some economists are talking about the death of inflation and even lower interest rates.

Are we headed for an Age of Deflation?

Not if the socialists are in charge! In preparation for giving a paper on “Modern Monetary Theory,” I read an entire textbook devoted to MMT.

What is Modern Monetary Theory, as advocated by Keynesian economists and some politicians such as Bernie Sanders and Alexandra Ocasio-Cortez?

The textbook in question, “Macroeconomics,” was written by three heterodox economists, two of whom are Australians, William Mitchell and Martin Watts (both at the University of Newcastle), and L. Randall Wray (at Bard College, New York). The textbook is co-published by Macmillan International and Red Globe Press. Red indeed!

They claim that because the federal government — unlike households and businesses — has the power to tax, borrow and print money, it can run huge deficits and issue new currency without ever running out of money.

They state bluntly that a country that issues its own sovereign currency “faces no financial constraints… governments in Australia, Britain, Japan and the USA can never run out of money… for most governments, there is no default risk on government debt.”

They brazenly deny that fiscal deficits cause the crowding out of private investment, higher taxes, inflation or big government. They also scorn the need for a balanced budget rule or a “rainy day” fund.

In fact, they go out of their way to belittle anybody who speaks out against “living beyond our means”… “spending like a drunken sailor”… “welfare dependency”… “burdening our grandchildren with the public debt… or national bankruptcy… Treasury checks never bounce.”

While this is technically true, there are limits as too much printing of money can cause inflation — a lot of inflation.

Japan and the United States: Outliers?

Certainly, Germany in the 1920s and, more recently, Zimbabwe have engaged in massive hyperinflation.

But the MMT advocates point to Japan and even the United States as two countries that have borrowed trillions of dollars even as interest rates and inflation have been falling. Granted, gold bugs and conservative politicians have exaggerated the dangers of the federal debt and national bankruptcy, but the fear of inflation is real.

The United States has gotten away with huge federal deficits and easy money because the U.S. dollar is a world currency and we’ve been able to export inflation.

Do We Owe It Ourselves?

MMT proponents, such as Stepanie Kelton, an economist at Stony Brook University, say that the national debt doesn’t matter because government securities are also Treasury bonds and therefore investment assets: “We owe it ourselves.”

Libertarian economist Murray Rothbard debunked the “we owe it ourselves” argument by saying, “The crucial question is: Who is the ‘we’ and who are the ‘ourselves’?” The bondholders (who tend to be wealthy individuals and institutions) are not the same as the taxpayers (who tend to be middle class). “For we might just as well say that taxes are unimportant for the same reason,” Rothbard said.

Spend Money With Abandon on Anything?

The MMT advocates have argued that because there are no financial constraints, the government can tax, borrow and print any amount of money to guarantee anyone a job at a living wage, pay for first-class health care, a generous retirement for the elderly and first-rate infrastructure. The sky’s the limit. (How about engaging in unlimited spending on foreign wars? No problem!)

The big spenders claim that only after achieving these goals do our leaders have to worry about inflation, which they can solve through clever fiscal and monetary restraint.

This sounds too good to be true. One can see why bleeding-heart liberal politicians would find MMT attractive.

In reality, MMT is fatally flawed as it would open the flood gates of inflation.

As Nobel Prize-winning economist Robert Shiller has warned, “Though increased spending on infrastructure, education, social welfare and the environment may be wise, and rising deficits may make sense some of the time, we really cannot borrow ceaselessly without risking real harm.”

Fortunately, we don’t have to adopt MMT to achieve prosperity for all. Here are several examples of countries that have adopted “supply side” economics and prospered without running massive deficits or engaging in easy money policies.

Sweden: In 1992, Sweden suffered a real estate banking crisis, a credit crunch and a monetary crisis. In response, the government guaranteed bank deposits and ran significant deficits. After the crisis abated, Sweden’s leaders engaged in a series of reforms to reduce the size of a bloated welfare state by privatizing various government programs, converting their state pension to a defined-contribution plan, adopting school choice with regards to education, cutting corporate and other taxes and reducing the overall size of the government while maintaining its generous welfare system.

Today, Sweden has a modest budget surplus. The average real economic growth in PPP (Purchasing Power Parity) terms is nearly 3% a year. Price inflation is low. The unemployment rate is 6.7%, largely due to a generous immigration policy. Sweden’s Economic Freedom Index has risen to the nineteenth freest in the world.

Canada: From 1994-95, Canada suffered from an oversized government. This resulted in a budget deficit, a currency crisis and Moody’s decision to downgrade Canadian debt. The Liberal and Conservative parties agreed to severe budget cuts and federal layoffs, despite strong opposition by Keynesian economists. Two years later, the budget was balanced, and the Canadian dollar made a strong recovery. Then, Canada adopted a series of supply-side tax cuts.

Today, the corporate tax rate is only 15%. The size of the government has been reduced, economic growth is over 3% a year and inflation is less than 2% a year. Unemployment is relatively high at 6.7%. The budget did fall into a deficit during the 2008 financial crisis, but none of the top five banks suffered serious losses. The Canadian budget has improved since then, although the Canadian dollar is weak. Today, Canada is ahead of the United States in the Economic Freedom Index.

Singapore: Economic growth has averaged 3.5% in the past five years, inflation is less than 1% and the unemployment rate is 2%. Singapore has accumulated substantial budget surpluses ($17.9 billion over the past three years), although it will run a deficit this year. Singapore has the world’s best medical care system that is made up of a combination of health saving accounts (Medisave) and universal coverage of catastrophic illnesses. Thus, health care represents only 4.5% of Singapore’s gross domestic product (GDP). The country has a flat maximum tax rate of 22% for individuals and 17% for businesses. Singapore has a free-trade zone. Though it is not a democracy, it is ranked #2 in the Economic Freedom Index.

Chile: Since General Pinochet stepped down as dictator and Chile’s decision to adopt democracy in 1990, its economy has continued to do well. Real economic growth has been 2.2% over the past five years and inflation is at a low 2.2% a year. The unemployment rate is 7%, largely due to the slump in copper and commodity prices. After running a surplus budget in 2011-12, the deficit returned. However, it is at a manageable 2.5% of GDP. The maximum tax rate is 44% on individuals and 25% on businesses. It is the highest-rated country in Latin America in the Economic Freedom Index (#19 in the world).

Of course, the MMT textbook does not mention any of the above four examples. 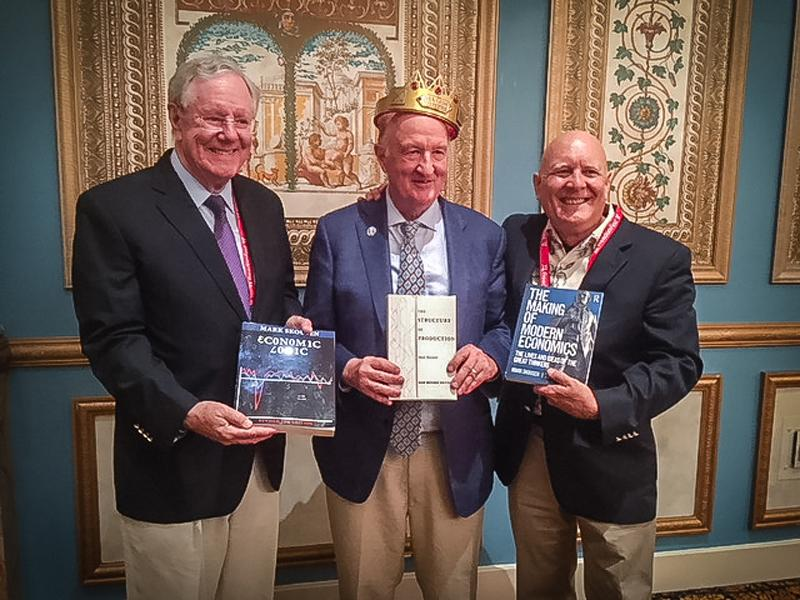 Steve Forbes (left) holding a copy of “Economic Logic” at the presentation of the Triple Crown of Economics to Prof. Skousen.

If you want a good free-market textbook that gives you the full story of sound economic policies, try my own book, “Economic Logic”, now in its 5th edition. It is published by Capital Press/Regnery.

Steve Forbes stated, “Mark Skousen is a superb and highly original scholar. Just look at his textbook “Economic Logic,” now in its 5th edition, which demonstrates Mark’s ability to look at the whole economy, the real world and real people. This rigidity between micro- and macroeconomics is not for him. He realizes they’re all connected together. He began this book with a profit-loss income statement to demonstrate the dynamics of the real-world economy. No other textbook does that. He gets it.”

There aren’t many cases where a broad range of economists from Keynesians to Austrians can agree on something. MMT is one of them. Vocal critics have included Paul Krugman, Robert Shiller, Kenneth Rogoff, Larry Summers, Jerome Powell, Steve Hanke and Robert Murphy. All have agreed that MMT is a bad, and even dangerous, policy.

It seems that MMT advocates are determined to test the validity of Adam Smith’s famous refrain, “There is a great deal of ruin in a nation.”

Let me end with this warning from the great French economist Jacques Rueff: “No religion spread as fast as the belief in full employment, and in this roundabout way, allowed governments that had exhausted their tax and borrowing resources to resort to the phony delights of monetary inflation.”

Note: If you would like my entire paper on MMT, go here.

My wife, Jo Ann, and I look forward to seeing many of you at the Baron Investment Conference this Friday, Oct. 25. We plan on meeting up with any subscribers at the 9:30 a.m. coffee break in the main stairwell.

Is Gold Back? Join Me for the New Orleans Investment Conference, Nov. 1-4, 2019, Hilton Riverside Hotel. With gold and silver in a new bull market, I urge you to attend the New Orleans Investment Conference, the annual gathering of gold bugs. I will be there, as he has spoken at every New Orleans conference since 1976! Speakers include Dennis Gartman, Kevin Williamson, Steve Moore, Rick Rule, Mary Anne and Pamela Aden, Doug Casey, Adrian Day and Peter Schiff. This is the granddaddy of gold bug conferences. All details can be found at neworleansconference.com/noic-promo/skousen/.

The post Is Inflation Coming Back? appeared first on Stock Investor.