Surprise, Surprise! 100% of Workers in This Country Invest in Stocks

I’m on a two-week working vacation cruise to Scandinavia with my wife and daughter (who is a figure skater on board the Explorer of the Seas).

In exploring the European countries of Norway, Denmark, Estonia, Finland and Sweden, I was surprised by the incredible economic growth of these countries since the end of World War II. I was especially impressed with one country in particular, Sweden, which is now the fourth-richest country in the world in terms of per capita wealth. 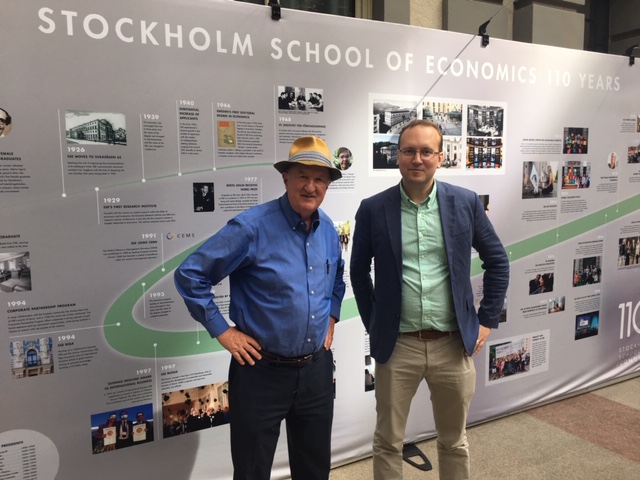 Mark Skousen and Jonas Grafström of the Ratio Institute pose in front of Stockholm School of Economics.

Is Sweden a Socialist Paradise?

Most people think of Sweden as a socialist paradise.

At this year’s FreedomFest, Marxist professor Barry Eidlin (McGill University in Canada) debated John Mackey, CEO of Whole Foods Market, on the question, “Which model is best for prosperity for all, democratic socialism or capitalism?” In the debate, Mackey and others in the audience asked Professor Eidlin repeatedly, “Name a country where socialism has been a success?”

Professor Eidlin hesitated but eventually pointed to Nordic countries like Sweden as a positive experiment in socialism.

However, it turns out that the Swedish success story is not due so much to socialism but to a shift away from socialist policies ever since a financial crisis hit the country in 1992.

In the 1970s and 1980s, Sweden adopted a quasi-socialist state, with big government, high levels of taxation and a “cradle to grave” welfare state that paid for education, medical care and retirement benefits.

But the result was an over-bloated state that led to a financial crisis in the early 1990s. As Swedish economist Johan Norberg opined, “We tried socialism and it was a disaster. Our economy was in crisis, inflation reached 10 percent and for a brief period interest rates soared to 500 percent. At that point the Swedish population just said, ‘Enough, we can’t afford this.’”

That sent a clear signal about the importance of long-term savings and created good financial habits.

For the first time, Swedes began investing in the stock market.

As a result, Swedes are the world champions in mutual-fund investing. Today, 100% of working Swedes have some part of their government pension savings in mutual funds.

It was good timing, amid the beginning of a long equity market rally that has continued for 30 years.

“Fund saving has contributed to the fact that private individuals have benefited from the fantastic stock market development we’ve seen over the past 30 years,” commented Johanna Kull, a savings adviser at Avanza in Sweden. “It’s a strong contributing factor to Swedes’ savings being at record levels today.”

That wealth also increasingly has found its way outside the country. While in 1990, 86% of stock investments were in funds investing in Sweden, they accounted for only 25% in 2018. Diversifying abroad has paid off.

John Stossel summarized the Swedish story in a ReasonTV report, “Many people think Sweden is socialist, but its success comes from free markets.”

Norberg hosted a documentary called Sweden: Lessons for America?, in which he noted that, in Sweden, “the government doesn’t own the means of production. To see that you have to go to Venezuela or Cuba or North Korea.”

Philadelphia MoneyShow, Sept. 26-28, Philadelphia 201 Hotel: I’ll be making a special appearance dressed as Ben Franklin! Other speakers include Ken Fisher, Dennis Gartman, Tom Sosnoff and John Buckingham. You can obtain free admission to the MoneyShow as my guest by calling 1-800-970-4355 and by mentioning pass code 048316.

The post Surprise, Surprise! 100% of Workers in This Country Invest in Stocks appeared first on Stock Investor.

Leah Barkoukis|
Has Biden Ever Been to the Border? The RNC Wants to Know
Reagan McCarthy|
Joe Biden Dealt Another Blow with Ongoing Haitian Border Crisis
Julio Rosas|
Dems in Disarray: Is The Biden Agenda Falling Apart on Capitol Hill?
Guy Benson|