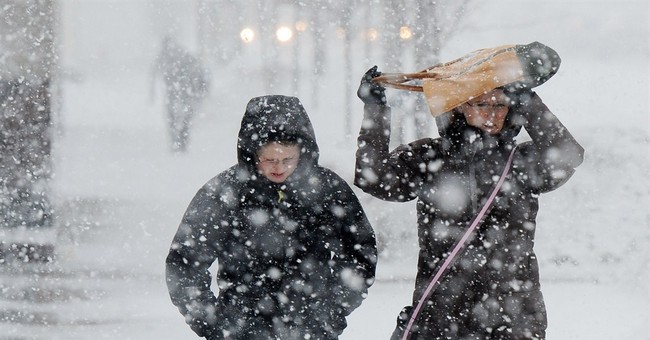 You know, nothing comes out of the Obama White House by mistake. Everything is planned, analyzed, and focus group-tested.

Last June when President Obama presented his Climate Action Plan at Georgetown University, some environmentalists hailed it. In response, Frances Beinecke, the then-president of the Natural Resources Defense Council, said: “The president nailed it.” The Huffington post reported that some environmental groups were wary that “Obama would follow through on the ambitious goals he laid out. Bill Snape of the Center for Biological Diversity described it as too little, too late.”

But, environmentalists haven’t been “thrilled with the administration’s record.” In January, 18 groups sent Obama a strongly worded letter telling him that he “needs to address climate change more aggressively.”

Obviously, Obama heard the complaints—making clear which group of constituents holds sway: billionaire environmentalist donors who believe Democrats have wavered on climate issues rather than the economically hard-hit middle class he claims to champion.

Earlier this month, the Obama Administration announced the creation of 7 “climate hubs”—which the New York Times called: “a limited step” but said it “is part of a broader campaign by the administration to advance climate policy wherever possible with executive authority.” It is unclear what these “hubs” are or will do, but the stated goal is “to help farmers and rural communities respond to the risks of climate change, including drought, invasive pests, fires and floods.”

Washington Examiner columnist Ron Arnold calls the new hubs “propaganda spigots” and cites Steven Wilmeth, a southern New Mexico rancher, who said: “It’s another one of those ‘I’m from the government and I’m here to help’ deals. All I can say is, ‘Don’t help me.’ We hear the talk, but they’re not telling us what regulatory burdens these climate hubs will add to the overwhelming load we already carry.”

Then on February 14, President Obama announced a new $1 billion “climate resilience fund” that “would go to research on the projected impacts of climate change, help communities prepare for climate change’s effects and fund ‘breakthrough technologies and resilient infrastructure.’”

In the Washington Post, Ed Rogers called the proposal “tired and unimaginative”—“part of a cookie cutter approach to our problems: It’s called the billion-dollar give away.”

Secretary of State John Kerry has received a lot of attention for his February 16 fear-mongering comments (reported to be the “first of what is to be a series of speeches on the topic this year”) in Indonesia, during which he called climate change a “weapon of mass destruction”—the “world’s most fearsome.” He told the students, civic leaders, and government officials gathered at the U.S. funded American Center: “Because of climate change, it’s no secret that today Indonesia is…one of the most vulnerable countries on Earth. It’s not an exaggeration to say that the entire way of life that you live and love is at risk.” He then, according to CNN, announced “$332 million in funding through the Green Prosperity program to help Indonesia tackle unsustainable deforestation and support clean-energy projects.”

Kerry also derided scientists and citizens, who challenge global warming’s scientific validity: “We should not allow a tiny minority of shoddy scientists and science and extreme ideologues to compete with scientific facts. The science is unequivocal, and those who refuse to believe it are simply burying their heads in the sand. We don’t have time for a meeting anywhere of the Flat Earth Society.”

HotAir.com’s Ed Morrissey responded: “The demand to stop asking questions and testing the theory isn’t science-based; it’s political. The more that politicians demand that people stop questioning their use of the hypotheses of AGW for their preferred policies of top-down control of energy production, the more obvious those politics become.”

James H. Rust, retired Georgia Tech engineering professor, told me: “I take great offense to the Secretary of State of the United States berating his citizens on a foreign soil. I recall no such incidents occurring in the past.” He added: “Kerry’s remarks are a political attempt to convince the American people to adopt policies to reduce fossil fuel use and lead the world on introducing a world-wide protocol similar to the expired Kyoto Treaty.” Regarding Kerry calling climate change “the world’s most fearsome weapon of mass destruction,” Rust quipped: “Can his memory be so short not to remember the thousands who have died due to the war on terror that stretches back to at least 1983 when 241 marines were killed in a Lebanon barracks; trillions of tax dollars spent on a war that is nowhere near finished?”

On February 17, the New York Times (NYT) reported that billionaire Obama donor Tom Steyer plans to spend as much as $100 million during the 2014 election cycle to “pressure federal and state officials to enact climate change measures through a hard-edge campaign of attack ads against governors and lawmakers.” Steyer has been critical of Democrats who waver on climate issues. The NYT reports that Steyer’s new fundraising push “signals a shift within the environmental movement, as donors—frustrated that neither Democratic nor Republican officials are willing to prioritize climate change measures—shift their money from philanthropy and education into campaign vehicles designed to win elections.”

Working with Democratic strategist Chris Lehane, Steyer created his political organization, NextGen Climate—a 20-person operation that includes a super PAC that the NYT says is “among the biggest environmental pressure groups in the country.” NextGen Climate spends millions of dollars to find climate-sensitive voters and in television advertising to try to persuade them. NextGen asked supporters for input on congressional candidates to target in its next ads. The list included vulnerable Democratic incumbent Senator Mary Landrieu of Louisiana.

Steyer’s efforts should scare Republicans, as he’s been successful in buying previous elections into which he has waded when he “burst onto the national political scene” in 2013. According to the NYT: “He spent $11 million to help elect Terry McAuliffe governor of Virginia and millions intervening in a Democratic congressional primary in Massachusetts.”

However, I see all of this Democratic emphasis on climate change as an opportunity for Republicans—if they handle it correctly.

The January electricity price index was just released and revealed that the cost of electricity has hit a new high—which doesn’t bode well for the rest of the year. CNSNews.com reports: “During the year, the price of a KWH of electricity usually rises in the spring, peaks in summer, declines in fall, and is at its lowest point in winter.”

True to the law of supply and demand, rising electricity prices in the U.S. have not been inevitable. According to CNSNews.com, following WWII, the U.S. was rapidly increasing its electricity generation capacity. In the 1950s and 60s the price remained relatively stable. However, since 2007, the U.S. has decreased its electricity production; while the population has increased by more than 14 million people—almost all with multiple electronic gadgets running simultaneously.

The 2007 benchmark is important because 2006/2007 is when the global-warming scare began to influence public-energy policy—this is the time frame when states passed laws requiring more-expensive renewable energy to be part of the total energy portfolio (laws that set up the rationale for the $150 billion of taxpayer dollars being spent on green energy projects). It is when the war on coal began.

Recently, I received a phone call from an irate woman. She told me she’d been searching the Internet for someone who could help her and found me. She explained that she was an unemployed, single mom living in an 800-square-foot apartment. She said she didn’t turn on her heat because she couldn’t afford it. When she got her electric bill, she noticed that it had a line item: $1.63 for green energy—about which she declared: “I don’t give a *!%# about green energy! I am so mad at PNM for making me pay for green energy that I don’t want!”

I explained that it wasn’t the utility company’s fault. They are just following the law by incorporating renewables into the portfolio. It is the lawmakers who deserve her wrath—from the local and state representatives all the way up to the president.

If the Republicans are smart enough to capture the anger of voters—like the woman who called me—and feature it in television ads, the Democrats' climate-change emphasis could be a winning issue for Republicans. (BTW, Karl Rove, Koch brothers, I have the caller's phone number. Maybe you could feature her in an ad.)