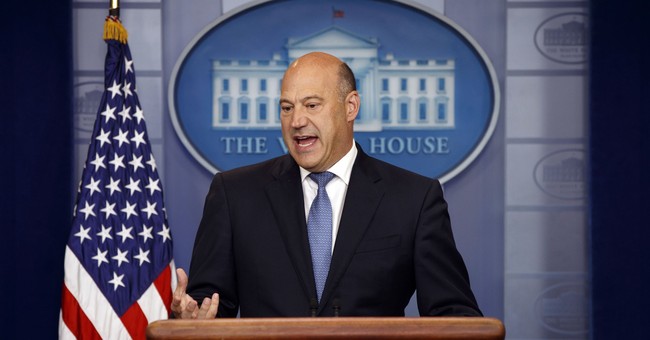 Much as he did in his command performance before the United Nations, when he took back control of U.S. foreign policy, President Donald Trump has seized and energized the tax cut issue. Almost daily, he is pounding away on the themes of faster economic growth and more take-home pay, arguing that his plan will make America's economy great again.

This is Trumpian leadership at its best.

"Under my administration," Trump just told the National Association of Manufacturers, "the era of economic surrender is over."

As usual, Democrats say the president's plan is a handout to the rich. But in a recent speech in Indianapolis, Trump asked: Why can't this be a bipartisan tax cut bill? He even quoted Democrat John F. Kennedy, who said, "The right kind of tax cut at the right time ... is the most effective measure that this government could take to spur our economy forward."

He also reminded his audience that President Reagan's tax cuts were passed with significant bipartisan majorities.

But today's Democrats have written JFK's tax story out of the history books (never mind Reagan's).

Key tax-writing committees are now polishing the Trump plan, fine-tuning it to pass the Senate with 51 votes. But there are a couple of key points that need clarifying.

The argument that the U.S. is doomed to two percent or less growth -- "secular stagnation" no matter what we do in terms of tax policy -- is nonsense. Across-the-board tax cuts produced 5 percent annual growth during the JFK period. And after tax cuts were fully implemented in 1983, real growth averaged 4.6 percent for the remainder of Reagan's presidency.

OK, let's take one example from the Trump tax plan. Corporations today are taxed at 35 percent. That means, for every extra dollar of profit, a company keeps 65 cents. But the president has agreed to a 20 percent corporate tax rate. So, for the extra dollar earned, the private company would keep 80 cents.

That's a massive 23 percent incentive reward. Do we really think businesses will not be affected by this? That defies logic.

And as supply-side mentor Art Laffer points out, the incentive reward of a lower business tax rate will reduce tax avoidance and sheltering. It's another solid point mainstream economists continue to ignore.

But the incentive effects don't stop there. The key to wage growth is productivity. Think of it as efficiency. And large and small businesses need new capital investment to modernize equipment and better train an efficient workforce.

Yet real wages have barely increased since 2000, alongside virtually no productivity increases and a huge slump in capital formation. That's the missing link between a two and a three percent economy.

Rather than punish investment, the Trump plan will spur growth across the board. Everyone will benefit.

The supply-side incentive effect also includes the repatriation of trillions of U.S. company dollars lodged overseas to avoid taxes, as well as 100 percent expensing write-offs for new investment of any kind.

Taken together, this plan contains a mountain of incentives.

On the individual side, the sleeper tax detail is the doubling of the standard deduction. As my CNBC colleague Jake Novak points out, this is a huge positive for young millennials (who don't own much) and folks with no mortgages or homes. It puts more cash in worker's pockets, simplifies the code and means that near 80 percent of taxpayers won't have any deductions.

More money for rich people? Well, the not-rich family of four will be a lot better off with a $24,000 standard deduction. And the center-right Tax Foundation calculates that the bottom 80 percent of households get a lower tax burden, while the top 20 percent get a higher burden.

The Republican Party has got to win this issue, preferably this year.

So, a warning: The GOP cannot let archaic process rules prevent good policy. Rules can be changed. CBO estimates can be ignored. Parliamentarian decisions can be overridden.

Play hardball, GOP. JFK did it. Reagan did it. And now you have Donald Trump doing it -- using all his energy to get a big tax cut that will return prosperity to America's workers and families and enhance our strength overseas.

Reagan McCarthy|
'That's a Hell of a Lie!': Biden Snaps at a Reporter Asking About Hunter's Laptop and Emails
Beth Baumann|

WATCH: Kamala Crashes and Burns When Asked About Having the Most Liberal Senate Record

Biden: You can frack for natural gas but you can’t burn it
Hotair
President Trump Plans Quick Purge of Wray and Other NeverTrump Administration Officials if Reelected
Redstate