Obama's Reckless Default Fear-Mongering: He's Attacking the Economy and Markets for His Own Gain. 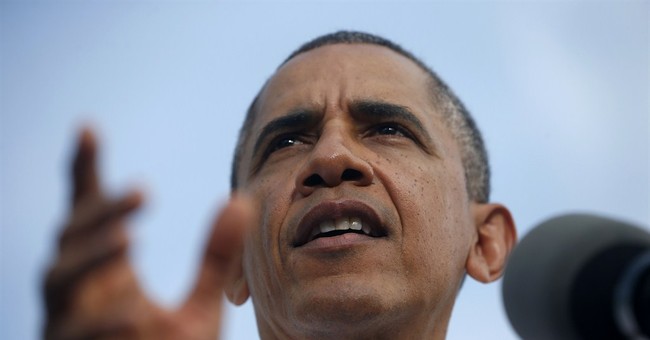 Trending
Never before has an American president threatened and risked the U.S. economy and financial markets the way Barack Obama has in recent days. For his own narrow political ends, Obama and his minions have actually accused the Republican party of deliberately provoking a Treasury debt default because they don't agree with the Obama position on the continuing budget resolution and the debt ceiling.

"As reckless as a government shutdown is ... an economic shutdown that results from default would be dramatically worse," Obama said on Thursday. Clearly targeting Republicans, he said a default would be "the height of irresponsibility."

Then, on the same day, Obama's Treasury Department released a brutal statement that said a default would prove catastrophic, causing credit markets to freeze and leading to "a financial crisis and recession that could echo the events of 2008 or worse."

So who exactly in the Republican ranks is calling for a Treasury debt default? Who? The GOP disagrees with Obama on the budget and health care, but no Republicans have ever said they favor defaulting on the nation's debt.

I have a strong suspicion that Obama and his troops are trying to provoke a massive sell-off in stocks and bonds to further their political position. And a massive sell-off like that could conceivably become a self-fulfilling prophecy, driving the economy into recession. Indeed, it could drive the whole global economy back into recession, since U.S markets are the epicenter of the world's system.

This kind of political tactic is beneath the presidency. No president -- not Nixon, Carter, Reagan, the Bushes or Clinton -- has ever menaced and assaulted the financial world to achieve short-term political gains the way Obama has. This has never happened before.

And frankly, because of the extraordinary importance of our financial system, especially after the crisis of 2008, Obama's selfish tactics border on the unpatriotic. Presidents don't act that way. They are custodians of their office. They attempt to create a positive legacy for the future. And they don't try to pull down the whole system for their own gain.

This is negativism to a fault. The people in the White House and Treasury know better. But apparently they know no political bounds.

According to a Wall Street Journal story, one senior Obama official went so far as to say, "We are winning ... it doesn't really matter to us how long the shutdown lasts, because what matters is the end result."

Right now the hero of this sad episode is House Speaker John Boehner. He countered Obama by issuing a statement that he is determined to prevent a federal default. He then stated, "I don't believe we should default on our debt, it's not good for our country." Boehner even indicated he would rely on Democratic votes in the House to pass a debt-limit increase and avoid default.

The difference between Obama and Boehner on this and other subjects is that Mr. Obama lacks a sense of historical experience and doesn't recognize what a high-stakes game he is playing. Mr. Boehner, on the other hand, has the benefit of years of high-level experience, and he knows how dangerous loose lips can be in affecting the markets and economy.

Earlier this year, House Republican Tom McClintock and 106 co-sponsors introduced the Full Faith and Credit Act, which would protect the payment, principal, and interest on U.S. Treasury securities, including those held by Social Security funds, even in the event that the federal debt reaches the statutory limit. In other words, by law, not default. Two years ago Senator Pat Toomey introduced similar legislation. And more recently, House Financial Services chairman Jeb Hensarling renewed the campaign for that bill. But Obama and the Democrats have always opposed it. And how bizarre is it that Obama opposes the one piece of legislation that would make it impossible for him or anybody else to make Treasury-default accusations?

Down through the years, presidents have made policy mistakes that severely damaged the value of stocks and bonds. And roughly 100 million Americans now own stocks, while countless others own bonds. And in our interconnected world, foreign investors around the globe participate in these markets. Yet our current president would risk all these assets by making phony default charges and by virtually threatening a financial and economic catastrophe if he doesn't get his way on the shutdown and the debt ceiling.

Here's a little bit of good news: Stocks and bonds were virtually flat across the first four days of the shutdown. They have so far ignored Obama's phony default charges. And they know that the U.S. will never -- never -- default on its Treasury obligations.

So once again I argue that markets are smarter than politicians. Let's hope I'm right.