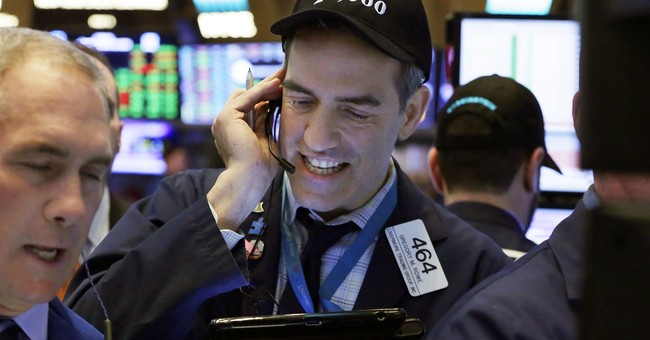 In the game of craps, one person is rolling the dice and betting on the outcome. Everyone else around the table can bet also. They can bet that the shooter will win. Or they can bet that he will lose, putting chips down on “do not pass”, which is a quick way to become resented by everyone else.

Of course, not that many people bet at gaming tables. The stock market is much more popular. On January 4, the Dow Jones Industrial Average closed over 25,000. It hit 26,000 last Wednesday, a 4% rise in under two weeks. Who could be unhappy with this?

I don’t want to be that guy, telling you to bet “do not pass.” Instead, I need to call attention to a serious economic problem. Our rising stock market is a symptom of the rising cost of capital. It may seem sweet to those who are selling capital assets, but it’s not good if you need to buy assets to generate income. Such as retirees. What you pay for a dollar of earnings is skyrocketing.

“Now wait a minute,” you might say at this point. “Stocks have gone up, but so have earnings.” It’s true, earnings have grown, at least after the depth of the crisis through 2011. However, stock prices have outpaced earnings. Through this bull market, the price of a dollar of earnings has nearly doubled, from under $14 in the middle of 2011, to over $26 today.

That is a high price. My argument is not that the stock market could drop (though, of course, it could). I am not offering trading advice. I am writing to show how this hurts people. To make that point, let’s first turn this upside down, literally. You may be familiar with price to earnings, or P/E (which is what I just quoted). A lesser-known statistic is earnings yield. It is just the inverse of P/.E. Here is a graph of the S&P 500, a broader index than the 30-company Dow.

The data only goes to December. Since then, stocks have risen and hence yields have fallen further. The price of funding your retirement has gotten very expensive. To buy a portfolio of large companies that earn $75,000 in income, you would pay $2,000,000. It gets worse. To a retiree, corporate profit does you little good. You need a dividend. To buy $75,000 worth of annual dividends, the price tag is about $4.3 million.

The current earnings yield has never been lower during a rising stock market, except for the dot-com era (it was lower after that bubble popped, and also as you can see above, in the global financial crisis).

The collapse in yields is precisely the plan of economist John Maynard Keynes (Federal Reserve Chair Janet Yellen is a member of the New Keynesian School). Kenynes was opposed to the “oppressive power of the capitalist” whom he said was an exploiter.

Keynes infamously called for the “the euthanasia of the rentier.” Rentier is simply someone who earns a return on capital (such as retirees). Keynes wanted to bring yields down as close as possible to zero, to suffocate those capitalist oppressors who depend on interest. In this way, he thought to bring about a new order in a way which “will need no revolution.”

Keynes was evil, but he wasn’t stupid. He realized that he needed a way to get his victims on board. He called for a falling interest rate (which we have had since Reagan took office in 1981). It’s still going today, notwithstanding the present passive-aggressive play at rising rates.

The flip side of falling interest rates and falling yields is rising asset prices. In other words, bull markets. That’s how you get the bourgeois victims to support their own euthanasia. Who could be against a bull market?