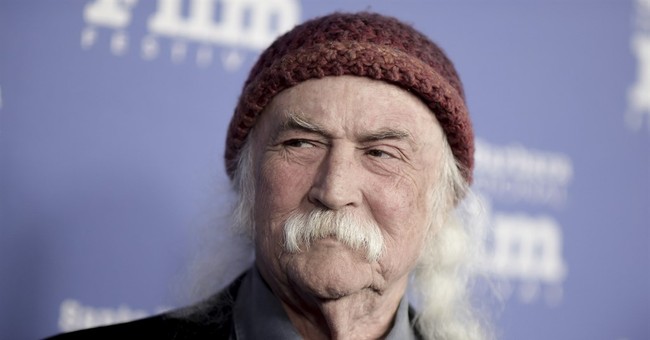 “I’m going to have a heart attack in the next year or two, and that’ll be it. I’m trying to get the music out of my head first.” Those are the words of two-time Rock ‘n Roll Hall of Fame inductee David Crosby (The Byrds, Crosby, Stills & Nash) to the Wall Street Journal’s Alan Paul.  Crosby is seemingly preparing fans for what’s ahead.

Since he has eight stents in his heart, his days are numbered. He wants to get the music recorded now. If the music reaches other musicians, and subsequently impresses them, watch as the music of tomorrow winds up sounding derivative of Crosby’s today. That’s the nature of the business.

For readers who want to know more about how this works, they would be wise to go see director Andrew Slater’s spectacular new documentary, Echo In the Canyon. An oral history of the 1960s Los Angeles music scene, it’s also an unwitting slayer of economic myth.

At present it’s popular among the punditry (left and right) to say that “China’s” so-called theft of intellectual property from U.S. companies exists as an existential threat to the economic prominence of the United States. More realistically it’s a sign of the immense vitality of the U.S. economy, and the certainty that it will remain vital well into the future. To be clear, so-called IP “theft” is an indicator of abundant economic progress.

Indeed, it was a known fact that the Beatles’ favorite band was Crosby’s The Byrds. During a 1966 stateside press conference held by the Beatles, Crosby actually sat behind them as they spoke to the media. From a musical perspective, all these bands were incestuous. Translated, they were routinely stealing ideas from one another on the way to music that got better and better. As the late Tom Petty explained it to Echo In the Canyon (“Echo” going forward) star/narrator/artist interviewer Jakob Dylan, “Anytime something good happens [musically], it’s going to show up somewhere else.”

The Beatles were heavily influenced by American rock ‘n roll that the band members picked up while listening to Radio Luxembourg. They adopted the styles and sounds of American musicians only to create their own own; albeit one derivative of what had first been produced in the U.S.

Where it gets more interesting is that in 1965 the Beatles released Rubber Soul. Viewed as the first “concept album” free of the filler that had previously been the album norm, Beach Boys’ musical savant Brian Wilson (described by interviewees in Echo as a modern Mozart) was blown away. He even worried about how his band would compete in the future.

What the Beatles achieved musically ultimately inspired him. The fruit of his inspiration was Pet Sounds, an album thought by many musical types to be the best ever. Notable is that the Beatles were blown away, so much so that they responded with another classic of their own: Sgt. Pepper’s.

American rock n’ roll inspired four Liverpudlians on the way to the Beatles, the Beatles were inspired by The Byrds, plus they had a friendly rivalry with the Beach Boys. Rubber Soul led to Pet Sounds, which led to Sgt. Pepper’s. As Jackson Browne explained it to Dylan, “with music, what happens influences everything else.” Petty went so far as to sheepishly acknowledge what Jobs wasn’t afraid to shout: great artists steal.

The good news is that the relentless borrowing among musicians in 1960s Los Angeles didn’t wreck the music industry as much as it set it on a path of amazingly profitable creativity. In any industry defined by relentless achievement and wealth, there’s going to be a great deal of copying, lifting, stealing – pick your word. Looked at from a sports perspective, the wildly prosperous National Football League is a monument to stolen ideas.

Taking the above further, it’s only in industries bereft of the creative and talented that individuals don’t see the genius of perfecting the ideas of others. Music reached its creative heights amid relentless copycatting. Absent it, the sounds of the 1960s that millions still enjoy today wouldn’t be worth listening to, or creating documentaries about.

Applied to China, it’s said by all too many who should know better that Chinese IP theft threatens “American” economic supremacy. More realistically, the increasingly profit-focused Chinese people are doing what entrepreneurs of all nationalities have long been doing. The bigger problem was when the Chinese lacked the freedom to be creative, and build on the ideas of others.

Importantly, what’s happening in China signals much better ahead for the economies of China and the U.S., along with the rest of the world. Endless imitation among the creative, and perfection of existing ideas by those creative types in the U.S. and China promises a great deal of progress. The winners will be consumers who invariably benefit from the fruits of competition.

The U.S. is the most prosperous nation on earth. That it is explains why entrepreneurs from around the world (including China) want to “steal” or imitate the clever doings of creative minds in the U.S. Pundits view this as a threat, think we should empower the federal government to penalize the theft, but the much bigger worry would be if the creative found nothing worth emulating.

In short, all the hand wringing about intellectual property theft is trite, and the stuff of individuals unaware of how industries have evolved throughout time. Growing government to fight IP theft would trample on our freedom, it would slow the positive evolution of living standards, and worst of all, it would quite simply halt progress. Viewers of Echo In the Canyon will see through art why the latter is true.