No Thanks To John McCain 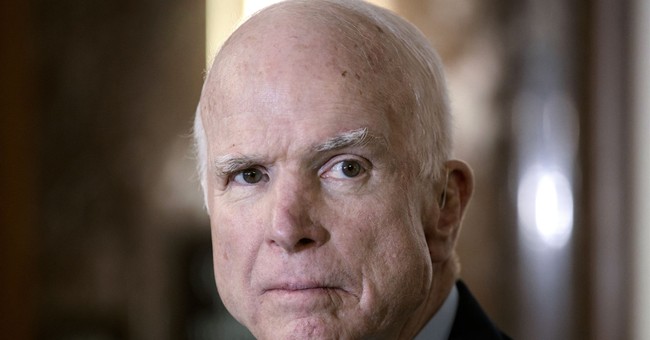 If America had a collective Twitter account they should be tweeting a massive “No thank you” to John McCain today.

While I think you can honor the sacrifice John McCain made as a POW in Vietnam, I don’t think being a prisoner of war, or dying of brain cancer, makes John McCain less responsible for the consequences of his actions during his lifetime.

I think it’s past time to honestly ask that question. And to demand an answer.

The truth is that if either the media or the collective GOP were asking that question, the country would be better off today.

Because after a nine month FBI investigation, and another two years of investigation by the special prosecutor of supposed collusion between Russia and Trump in rigging the 2016 election, one thing is clear: Neither investigation was really necessary. The Trump campaign did nothing wrong.

It’s also clear that that a man as intelligent as John McCain-- as knowledgeable about foreign affairs, spying and government as McCain was-- should have known better than to use the Steele dossier to get the referral that started the investigation to begin with.

Account after account of the Steele dossier make in sound quite literally incredible that anyone would have taken the allegations in the dossier seriously.

I get it: John McCain and Donald Trump didn’t like each other…in life and in death. But for a guy who spent much of his time lecturing the rest of us about honor and courage and the ‘high road’, the several investigations that McCain helped manufacture has been a bad deal for America.

So while people roundly condemn Trump for attacking McCain, a dead man, via Twitter, consider what John McCain actually did to Trump. Politically and morally it was the equivalent of Jussie Smollett draping a rope around his neck, pouring bleach on himself and saying “white men did this to me.”

And not just any white men: “Trump” white men.

Would the Jussie Smollett’s of the world feel comfortable about making allegedly false accusations about Trump, and everyone who looked like Trump, if they didn’t see American “superhero” John McCain do it first?

The winners in this distraction for America have been the people that McCain said he was really worried about: The Russians.

The losers have been the American people, even and maybe mostly Democrats.

A Suffolk poll this week made headlines when Trump tweeted that the poll found that 50.3% of registered voters agree that the investigation has been a “witch hunt”.

That was even before the financial crisis hit.

As distasteful as it sometimes feels for Trump to tweet an attack at the dead American hero, John McCain, Trump’s not wrong in his premise.

What John McCain did was wrong.

And regardless of his past service, and his recent death, it’s time for America to recognize good versus bad, right versus wrong and say “No thank you” to John McCain.

We’ve been thanking guys like him for way too long .