Does Anyone Even Understand the President? 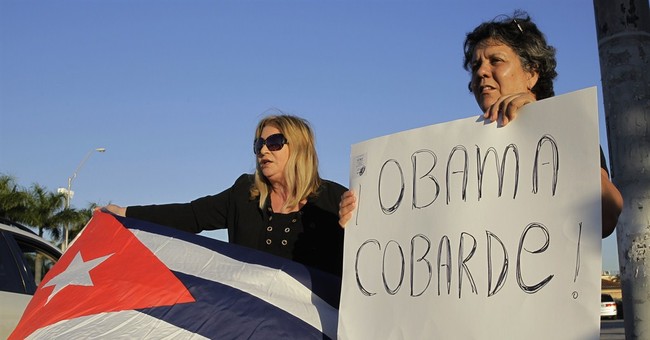 Look if you can’t screw up the economy in this country anymore, the least you can do is help out the one remaining Stalinist regime in the Americas.

That’s the take away I get from Obama’s phone and pen ploy to “normalize” relations with Cuba.

Since he’s failed at creating jobs here, maybe he’ll do a better job creating jobs in communist Cuba, an economy he better understands.

After all, Cuba has all those old cars, and Obama loves those Cash for Clunkers.

Or maybe it’s just this: Obama really hates Hillary so much that he’s willing to throw away the Cuban vote in South Florida to scuttle her chances of being president.

Pick a reason, any reason whatever, but you can be sure that Obama at his roots has some personal, political motive for “normalizing” relations with Cuba.

Getting past the fact that Obama enjoys normal relations with no one, it’s obvious the burning central issue of the day, the thing that could really change his presidency into one of only underwhelming failure and overweening weenyism is ending the embargo for the worst dictatorship in the Western Hemisphere.

Things will really start humming now for the president.

No, no, no: He needn’t worry about Iran getting the bomb, or the war in Ukraine, Russian bombers violating NATO airspace, ISIS, the Euro recession, wars and rumors of wars in Africa, the Middle East and the Urals.

Remember when the calm, cool, collected candidate Obama reacted to the growing financial crisis in 2008 by saying the president needed to be able to do several things well all at once, while candidate John McCain panicked and ran back home to D.C.?

I would settle for a calm, cool president who could just do one (1) thing at a time well.

It’s come to that. I don’t just oppose this president’s ideology; I oppose his competency.

There could be things that the president and I could agree on. Of course I wouldn’t know—nor would you-- because most of the time I have no earthly idea—nor do you-- why he does what he does or what he means by doing them.

Why for example did he pitch global warming as a key campaign message during the 2014 mid-terms, or helpfully campaign for Democrat candidates who made it known they didn’t appreciate his help?

Is he that dumb? Or was it a clever ploy to cover up the last stupid thing he did?

There is a whole cottage industry devoted to deciphering the intended unintended consequences of the ideological incompetency and inconsistency that exudes from Obama.

Most of the time I’m left wondering if Obama genuinely follows a strategy that involves going from one gaffe to the next, from one poorly thought out decision to the next outrageous statement; from one ham-handed fumble to the next half-baked excuse on purpose.

And I suppose in this, upon reflection, I have gotten my wish.

There is one thing that president is doing really very well. He is making his party more irrelevant as he stumbles and fades at the finish line.

And I would hope that he continues to make the Democrats irrelevant by doing silly things like lifting an American embargo on Cuba, an idea no one understands, done in a way that will be most offensive to the most number of people.

It’s the epitome of Obama’s governing style: He’s doing something dumb and he looks dumb doing it, for reasons maybe even he doesn’t understand.

Yeah, no one does really.