Yes, Michelle, It's Because You're Black 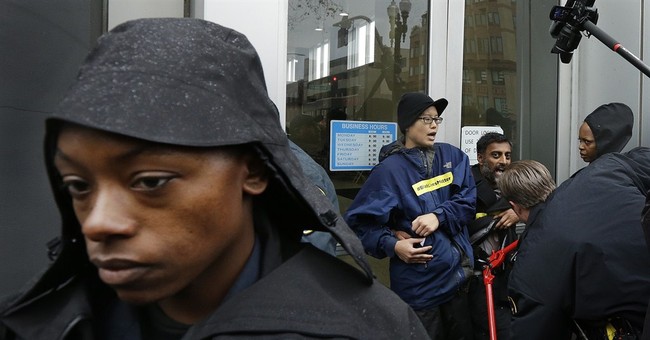 Michelle Obama wants you to feel bad for her, and for Barack, because they are black.

“I think people forget that we’ve lived in the White House for six years,” Michelle says in People Magazine. “Before that, Barack Obama was a black man that lived on the South Side of Chicago, who had his share of troubles catching cabs.”

Why didn’t the emperor clean up Chicago neighborhoods with his pen and his phone while he was there? Cabs likely would have stopped more frequently if the city, especially the South and West Sides, wasn't infested by crime.

No doubt there is racism in Chicago, a city I lived in longer than Barack Obama did.

But much of it is the latent kind—and it’s committed by both whites and blacks.

Chicago, you’ll remember, is a city that is home to the Jesse Jacksons, both senior and junior.

And as a white man, remind me to tell you the times I’ve had trouble catching a cab in the rain or the cold in Washington, D.C, another city in which I lived longer than Barack Obama did.

No doubt there is racism in D.C. and much of it is the active kind.

D.C. is a city where Mayor-for-Life Marion Barry, despite his many crimes, succeeded as a race baiter because he was black.

Michelle Obama goes on to say that she’s been mistaken for a worker at Target.

Why don’t you try being a worker at Target, Michelle, which after all is an honorable job?

I was very happy to have the opportunity.

See, what Michelle fails to mention is how much she owes America for the opportunity.

What other country in the world would have given Barack Hussein Obama a chance at a time when the word is engaged in a vast war against radical Islam?

Then there is the matter of Obama’s mansion in Chicago.

What other country in the world would have overlooked the crooked payoff the Obamas got-- not just from Tony Rezko, who made their mansion purchase possible-- but from the entire Chicago Outfit, including major media, like the Chicago Tribune? The Tribune endorsed Obama despite knowing EXACTLY who Barack Obama was.

Yes, no doubt there is racism in this country. But it is a product of both sides, black as well as white. And most definitely, on average, the Obamas have benefited from such racism.

After all, they have not suffered from the real racism endemic to America: The education system has served them both very well; there have been no extended periods of unemployment for either of them; Barack has not been incarcerated over petty drug dealing; if Obama suffers from a shortened life span it will likely because of his smoking, not his race.

Where real racism amongst blacks resides is in education, employment, incarceration and longevity. And Michelle and Barack have no real experience in actually solving any of those problems. In fact, Obama killed the one education program in D.C. aimed at giving blacks an equal footing in regards to education.

And oh, let me tell you, that’s horrible.

The Obamas have received abundantly from this country because they are black.

It’s time for them to stop scolding a country that gave them so much.

And give back because they are black.