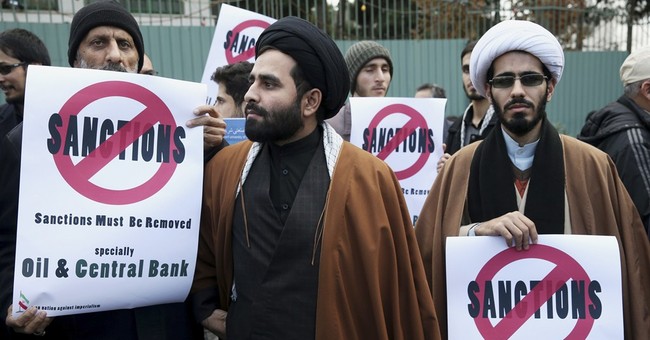 We have two cautionary tales from overseas today.

One of them is from Iran and the other is from France.

Both of them demonstrate how wrongheaded, obtuse and shortsighted Democrats are on their policies and prescriptions for what ails the county.

If you get a job in France, you apparently get a job for life whether your employer is a private firm or the government.

“The measures include relaxing rules on Sunday and evening opening hours at retail stores; removing some restrictions on new bus lines to increase competition with the national rail operator, SNCF,” says the New York Times, “and opening up regulated professions including notaries and auctioneers to greater competition.”

How dynamic. What will the all-important notaries and auctioneers do now?

As a result of the screwed up labor laws few French firms are anxious to hire even when conditions are good.

But conditions aren’t good. France’s economy is barely avoiding recession, and there is a good likelihood that next year will bring a contraction in economic growth.

French president Francois Hollande, a socialist, says that he will not run for reelection if he can’t tame unemployment. The proposed laws are aimed at curbing unemployment in the country, which has gone up to 10.4 percent.

Previously the government cut payroll taxes to encourage companies to hire, but that just drew thousands of business owners into the streets to protest the labor laws that make it hard to fire people.

What can you say about a country where the business owners are the disenfranchised?

Just exactly why is Obama trying to impose this European social system on America?

And then there is Iran.

If oil prices are dropping you know that there is an Iranian mullah mad somewhere. And indeed the president of Iran Hassan Rouhani has accused Saudi Arabia of treachery for refusing to support OPEC production cuts.

"Iran and people of the region will not forget such conspiracies, or in other words, treachery against the interests of the Muslim world," says Rouhani.

The proposed cuts, which would be aimed at stopping the slide of oil prices for the OPEC cartel, are being debated at a time analysts from the oil exporting countries are expecting the weakest demand for their product in 12 years, according to Bloomberg television.

Saudi Arabia controls about one third of OPEC production. OPEC makes up about 40 percent of worldwide oil supply.

However with the U.S. producers increasing production of shale oil the world’s top economy has been able to cut back on demand from OPEC.

By my own calculation that’s 400 years of supply for the US, assuming all of it was extracted, which of course is unlikely.

But even at a 50 percent extraction rate, that’s still 200 years of proven reserves.

As I have been arguing for years right on this page, shale oil will change geopolitics and our economy for the better.

"We are entering a new era for oil prices, where the market itself will manage supply, no longer Saudi Arabia and OPEC," said Mike Wittner, the head of oil research at Societe Generale SA in New York. "It's huge. This is a signal that they're throwing in the towel. The markets have changed for many years to come."

The fracking boom has driven U.S. output to the highest in three decades, contributing to a global surplus that Venezuela yesterday estimated at 2 million barrels a day, more than the production of five OPEC members. Demand for the group's crude will fall every year until 2017 as U.S. supply expands, eroding its share of the global market to the lowest in more than a quarter century, according to the group's own estimates.

So who said we couldn’t drill our way out of the oil problem?

Oh yeah the Democrats did; more precisely, the smartest, greatest, gayest and saddest president we have ever had did.

Just count it as a another thing the smartest guy in the country knows nothing about. But we are past him.

For America, at this Christmas time, one has to ask what kind of country will we have if Obama’s successors, like Elizabeth Warren or Hillary Clinton have their way?

We’d have a country that looks more like France, and is more dependent upon the Saudis and the Iranians for energy than ever before just at a time when salvation seems nearest. Therein lies the problem for Obama, Hillary and Fauxcahontas. And they won't be able to just drill their way out of it by drilling the GOP.

They were wrong and we were right. It's time for someone from the Democrats to admit it.