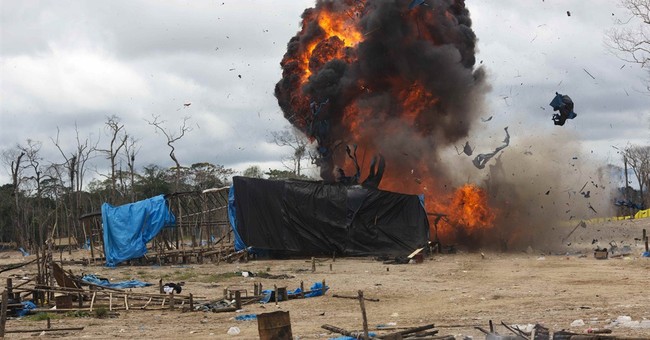 First you couldn’t use fossil fuels because they put carbon into the atmosphere.

So no car or air conditioning for Africans.

Then it was meat that was forbidden for being an emitter of greenhouse gases. So no protein for them either.

I guess Africans will just have to die.

Apparently there is nothing that we can stop the onslaught of greenhouse gases either.

"This study shows the power of modeling and data mining in addressing potential sources contributing to seasonal changes in carbon dioxide" said Liz Blood, program director for the National Science Foundation's Macro Systems Biology Program, who supported the research. "It points to the role of basic research in finding answers to complex problems."

Actually it points to the basic flaw that modeling and data mining have in trying to “manage” complex systems like “weather”.

Because the last time I looked the country that grows the most corn was having a record cold spell and global warming had stopped completely.

The problem we have is that most of this supposed modeling and data mining is based upon supposition and distortions that include and misuse the the words “could,” “should,” “will,” and “science”.

Here are just a few other examples:

The journal Science has now “predicted” that we will see a fifty percent increase in the number of lighting strikes if global warming remains unchecked.

Yes, and Comrade Doctor Roy “predicted” that Tampa Bay would upset the Bears.

The World Bank, which last time I checked was a BANK, not a scientist, says that global warming could “significantly worsen intra- and inter-generational poverty in multiple regions across the globe."

More extreme storms, dogs sleeping with cats, according to the models from the same central bankers who thought sub-prime loans were a swell idea.

“The bank said it is already likely that average temperatures will rise 1.5 degrees Celsius (2.7 degrees Fahrenheit) from pre-industrial levels,” reports Phys.org, “based on the built-in impact of past and current greenhouse gas emissions.”

Does anyone else see the irony here?

I guess they haven't really considered the effects global cooling might have.

Probably not, because they are too busy reading about the sap that will drip in gobs and gobs on their new car—but not in Africa because they won’t be allowed cars, or food-- as reported by NBC, because of global warming.

“But that’s just one example of what could happen in a warmer world,” says NBC. “Some species do better at the expense of others — and the beneficiaries might be real pests.”

Every day the public is bombarded with reports that say woulda, coulda, shoulda on global warming. And the longer the interval between the “predictions” disguised as science are, the more certainly the disastrous consequences.

And the fact that policy makers want to rush measures to combat these “predictions” is the tip off to many who should know better.

You want to help reduce “intra- and inter-generational poverty in multiple regions across the globe”?

Cool off some fake scientists. Better yet fire them.