From the Great Emancipator to the Mental Masturbator 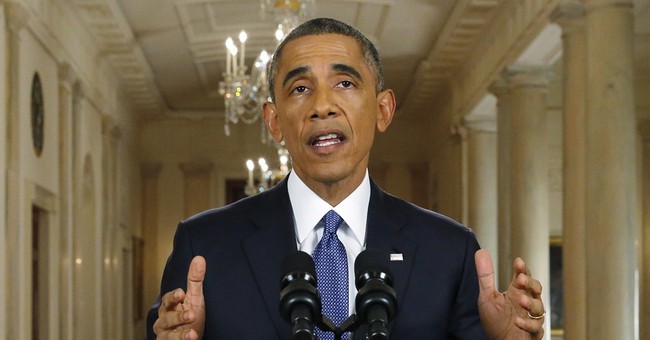 Well he loves himself.

And his executive action on illegal immigration is his last, full measure of devotion to his love.

I just didn’t expect him to love himself so openly, so publicly, so disgustingly.

Barack Obama, anxious, as he always has been, to compare himself to Abraham Lincoln, needed a hostile Congress as a foil to create a crisis to issue an order where he and he alone would be the only actor on stage…so that his admirers would compare him to Lincoln.

It’s part of what Lee Harris in Civilization and It’s Enemies called a fantasy ideology. That is “political and ideological symbols and tropes used not for political purposes but entirely for the benefit of furthering a specific personal fantasy.”

For Obama the point was not to liberate people, but to enthrall them with his Lincoln fantasy. If America didn’t need a civil war, Obama would create one.

He believes it fitting a proper that he does this because he loves himself that much.

For the record, we were never going to deport 5 million illegal aliens.

We often times have trouble just deporting one, as was the case with Luis Enrique Monroy-Bracamontes, the cartel member who killed cops in Sacramento, after being deported twice for drug-related offenses.

And few Americans have problems with immigration, per se. They have a problem with the stupid way the federal government treats immigration, legal or otherwise.

It’s a dangerous way to run a country.

For the government and immigration—and banking, and jobs, and healthcare, and energy-- if it’s not working, don’t fix it is too often the model.

Oftener than not the government makes matters worse.

But what is just an observable fact about government—that it sucks generally— Obama has taken to new levels by personally hijacking the government for his fantasy ideology.

Obamacare was passed, we now know, so that Obama could compare himself to Franklin Roosevelt as a great expander of the welfare state. Lacking utility for the very people it was supposed to help—the American people—it’s clear that it was passed as a monument to one man.

Remember: As soon as he could Obama embraced the term “Obamacare.”

We knew he always wanted to embrace it, despite protestations to the contrary.

Similarly, Obama always needed to be known as the Great Emancipator.

“Not since Abraham Lincoln pondered his Emancipation Proclamation in 1862 has a president considered ordering a more sweeping adjustment to membership in the American community,” wrote the official press office for the White House, also known as the Washington Post, even before Obama acted, “than the mass relief for illegal immigrants that President Obama is said to be contemplating.”

Similar comments were made by other media outlets close to the White House.

The connection and talking points from the administration were clear: In defeat Obama would be Lincolnian, taking upon himself the mantle of action to save the …union?

See? It doesn’t matter that upon scrutiny the comparison falls apart.

All that matters is that Obama gets to continue to play the fantasy role of president engaged in a great civil war.

It’s a terrible tragedy that this nation or any nation so conceived and so dedicated to the proposition that all men are created equal would be subject to the self-love of one man, furiously, famously engaged in a pornography of politics that is really just a one man peep show.

And all we can do now is ignore him until he finishes.
Share this on Facebook
Tweet
Top Senate Democrat: Yeah, Maybe Impeachment Isn't a Good Use of Time
Katie Pavlich|
Biden Commerce Secretary: Sorry Folks, We're Raising Taxes to Pay for Climate Policies
Katie Pavlich|