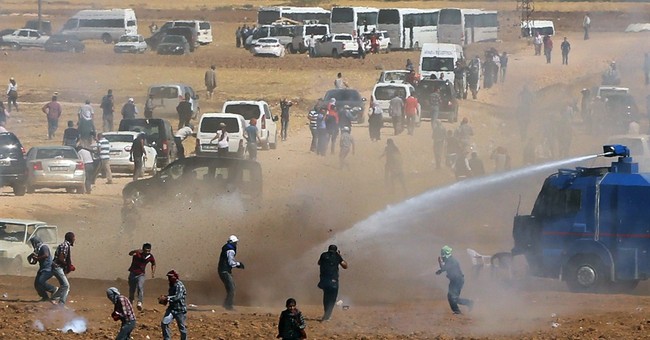 Turkey was able to close down THEIR border crossings after 70,000 refugees from Syria fled ISIS into Turkey. They used tear gas and water cannon, along with a sign that says “This Border Closed” to stop the flight into Turkey's Islamic state.

“Turkish security forces have fired water cannon and tear gas at crowds which had gathered in support of Syrian Kurdish refugees on the border,” reports the BBC.

“It comes after some 66,000 refugees poured into Turkey in 24 hours. Turkey opened its border on Friday to Syrians fleeing the town of Kobane in fear of an Islamic State attack.”

While I like the Kurds in general, I think Turkey is giving us part of the solution to our own border problems: We need to send some of our politicians to Turkey to be tear gassed too. A little water cannon wouldn’t hurt either.

While there would no doubt be civil rights implications—bad for the politicians and good for us-- don't discount the fun factor here. Tear-gassing Eric Holder and Nancy Pelosi would not only help them understand that he have the right to defend ourselves, it would also just be fun.

And you don't even have to be Turkish to enjoy that.

The highlight of navy boot camp for the NCOs at Great Lakes when I went through was when they lined up recruits and had them remove their gasmasks in a chamber filled with tear gas while reciting the Sailor’s Creed:

I am a United States Sailor.

I will support and defend the Constitution of the United States of America and I will obey the orders of those appointed over me.

I represent the fighting spirit of the Navy and those who have gone before me to defend freedom and democracy around the world.

I proudly serve my country's Navy combat team with Honor, Courage and Commitment.

I am committed to excellence and the fair treatment of all.

Snot ran, we cried, we did not laugh and a good time was had by men, mostly in their 20s, who had been in the Navy long enough defending freedom and democracy around the world for the event to pass as entertainment.

But think how much more fun it would be to tear-gas someone who actually deserved it like Elizabeth Warren or Hank Johnson.

So maybe we can have a similar creed made up for the cretins who decided that the proper response to Russia’s occupation of Ukraine and ISIS occupation of Iraq and Syria was to mobilize feminists in NYC via 550 union-provided buses to STOP GLOBAL WARMING NOW! 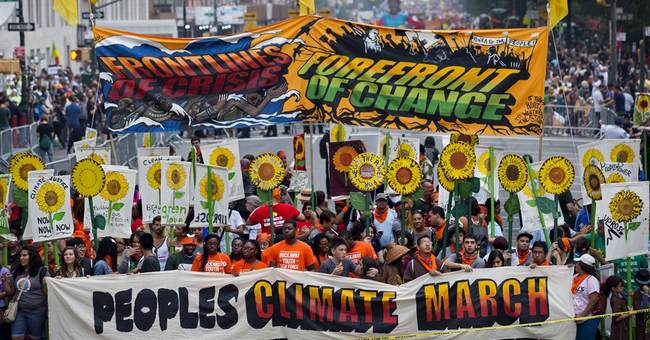 The larger issue could be addressed as well through tear-gassing.

And that larger issue is this: Many countries abandoned by Obama's so-called foreign policy—including our own--are having border problems as a direct result of the president’s Democrat-induced delusions of pander.

Let’s face it: If it weren’t for pandering Obama would have no foreign policy objectives at all.

Created by pandering to the Arab Street’s desire for reform, no matter what form reform takes.

Pandering to Europe and the Arab States.

Pandering to Democrat pollsters who need to keep Hispanics in line for the next next election, which of course is always only one more election away.

Because while throngs gather at the United Nations this week to hear Obama try to change the topic from his own pandering and shortcomings to even more pandering followed by more Obama shortcomings, keep one thing in mind: If Obama were at the UN to get tear-gassed while reciting the Sailor’s Creed, even more people would show up to see it.

And for the right reasons too.

We wouldn’t even need buses.