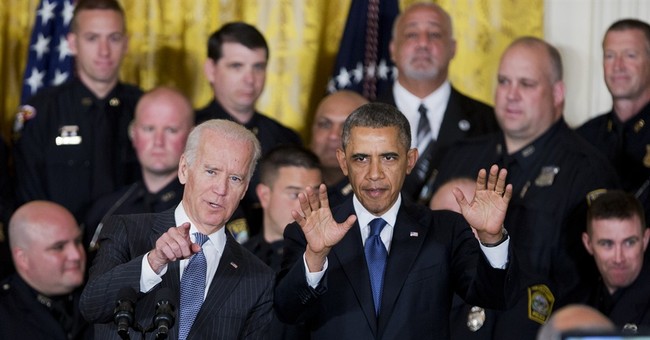 News flash to the world: Obama’s a liar.

Yeah, all politicians are. I get that part.

But not all politicians get pilloried for it in books by their top aides.

Tim Geithner appears to be the last of a plethora of administration insiders who say that Obama fibs.

Geithner claims that Obama, through Jack Lew, asked him to blow a “dog whistle” to the Left by claiming that social security wouldn’t contribute to future deficits.

Geithner explains that the “dog whistle” was secret code telling the Left that social security wouldn’t be touched according to an account by FoxNews.

Having put the story in print, Geithner is now claiming that he’s being misquoted in his own memoirs, which until now, was the only thing distinguishing Terrell Owens' autobiography.

Move over 81, you got company.

More Americans died during Obama’s guidance in Afghanistan than during the whole Bush presidency.

“In fact, according to the CNSNews.com database of U.S. casualties in Afghanistan,” writes Dennis Crowley of CNS, “73 percent of all U.S. Afghan War casualties have occurred since Jan. 20, 2009 when Obama was inaugurated.”

“Obama, after months of contentious discussion with Gates and other top advisers, deployed 30,000 more troops in a final push to stabilize Afghanistan before a phased withdrawal beginning in mid-2011. ‘I never doubted Obama’s support for the troops, only his support for their mission,’” Gates writes.

Pretty much the same thing.

You can’t ask people to die over remaining steady in polling and still say you support the troops.

“The White House seemed to see an actual benefit in not doing too much,” says former administration official Vali Nasr who worked on Pakistan/Afghan issues for the administration according to the Washington Times. “The goal was to spare the president the risks that necessarily come with playing the leadership role that America claims to play in this region,” saying that Obama was more interested in the domestic political effects of foreign policy, and using foreign policy as a tool to hit Hillary Clinton.

While not necessarily a lie, certainly running foreign policy for parochial domestic interests was and is counterproductive to American interests.

While not penned by an insider, Edward Klein’s book The Amateur, is full of accusations by administration insiders who claim that Obama has lied to Americans about what his real agenda is, about the competency of Obama’s administration, and his inability to get along politically with even his one-time most ardent supporters like Caroline Kennedy and Oprah Winfrey.

Insiders have at least been decidedly prescient and consistent in their degradation of Obama.

They knew what the rest of us suspected even before the Obamacare fiasco confirmed Obama to be an opportunist who will say whatever he thinks he can get away with.

So here’s my question for my liberal friends: At what point do you abandon this president if not on principal at least out of a sense of self-preservation?

History won’t be kind to Obama if already the memoirs are so full of brutality.

Imagine what will be said when Obama is no longer president.