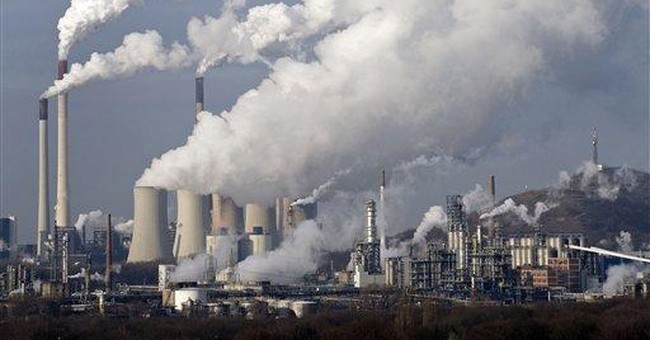 If you’re like me this will send chills down your spine.

Nature Climate Change recently published a paper that contends that temperate zones will see reduced crop yields by 2030, presumably plunging the world into a man-caused famine not seen since the last time communists were in charge.

From Blue and Green Tomorrow:

“As more data have become available, we’ve seen a shift in consensus, telling us that the impacts of climate change in temperate regions will happen sooner rather than later,” said Professor Andy Challinor, lead author of the study.

Yes, any time I see the word “consensus” in the context of the "settled science" of global something I break out into a cold sweat, I hyperventilate and my sight grows dim.

And that should happen to you too.

Because I next wonder: “How much is this going to cost me exactly?”

But then I remember, upon studied reflection, that every time the WeatherNazis come to a consensus about anything they’re as wrong Hitler was in invading Russia without winter clothing.

Certainly, it’s a lot warmer for him now.

For the estimated $100 billion annually that we will be spending on “climate change” programs by 2020, I’m thinking that there might be a better way to spend that money, like terraforming Mars for human population or throwing a really big Fourth of July Parade.

These are certainly better ideas than the rationing of electricity, wearing clothes made exclusively of hemp and dating chicks with hairy armpits.

Or driving a Chevy Volt.

But the news gets worse for liberals.

The indoor hemp industry apparently produces the same amount of carbon in the atmosphere as 3 million cars.

“'[I]ndoor Cannabis production uses 1% of the nation’s entire electricity consumption,' reports Lawrence Berkeley National Laboratory researcher Evan Mills in the Huffington Post. 'This comes to energy expenditures of $5 billion per year.' While 1% may not seem like a lot, the report claims that smoking one single Cannabis joint is equivalent to running a 100-watt light bulb for 17 hours. That Cannabis cigarette carries two pounds of CO2 emissions."

I don't know what a gram of dope costs these days, but that's a lot of carbon for a gram.

While the doomsday date for the final destruction of mankind due to global warming gets pushed back farther and farther, I’m wondering if any of these WeatherNazis actually understand human history.

It would be wonderful if human activity could warm the planet.

The danger to civilization isn’t a warm planet, but a cold one.

It was only with the retreat of the last Ice Age that the ascendancy of modern man took hold. Without that, we’d all be living in caves, each of us ineligible to be president of the United States because we’d all still live in Kenya.

Instead we live in the house of cards that the president of the United States built—who by the way was born in Hawaii, a place much warmer than most of the globe; and presumably what Montana will be a lot like in the global something future.

Weather does influence culture, but not in the ways the alarmists would have you believe.

A new study by Matthew Ranson—no relation (my relatives know how to spell)—made possible by a fellowship from Harvard, predicts that because of global warming crime will spike, with your daughters unsafe to roam the streets day or night.

“The results show that temperature has a strong positive effect on criminal behavior,” writes Ranson, “with little evidence of lagged impacts. Between 2010 and 2099, climate change will cause an additional 22,000 murders, 180,000 cases of rape, 1.2 million aggravated assaults, 2.3 million simple assaults, 260,000 robberies, 1.3 million burglaries, 2.2 million cases of larceny, and 580,000 cases of vehicle theft in the United States.”

See and all this time I thought that dinosaurs failed to adapt and thus became extinct.

I never knew it was dino-on-dino crime caused by high global temperatures.

And so reports like these send chills down my spine.