The Obamacare Jobless Rate Soars from 13.8 percent to 14.3 percent 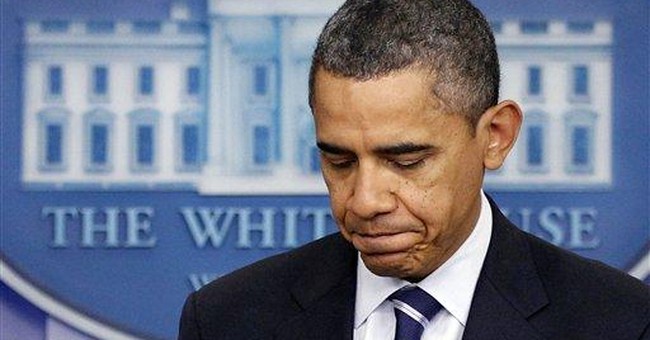 The market got more bad news that’s good news- but not good in the sense that it actually helps you, me or anyone else- when the new jobs reports came out on Friday.

This "good news is bad news is good news" thing is getting tiresome. It's part of what our friend Mike Shedlock calls the Obamcare Effect.

The report showed that despite the dire warnings from federal bureaucrats, politicians and K Street lobbyists, the jobs market didn’t fall apart because Republicans forced the government to spend less than it planned.

“U.S. job growth accelerated in June thanks to a big jump in hospitality and service workers,” said CNBC, “according to a report that is likely to trigger more debate about how aggressively the Federal Reserve will begin pulling back on monetary easing. Unemployment steadied at 7.6 percent for the month, as nonfarm payrolls grew by 195,000, according to a closely watched Labor Department report Friday. Economists expected 165,000 more jobs and a decline in the unemployment rate to 7.5 percent.”

Unemployment “steadied”? Well not quite. It actually went up, way up, as we’ll see below.

The bad news for the market is that as jobs growth expands, it’s more likely that the Federal Reserve will stop pumping an estimated $85 billion in new money into the stocks and commodities markets, commonly known as Quantitative Easing.

That means that markets will start to have to trade on it’s own merits. Not every trader will get a ribbon now. And that means Wall Street will have to figure out a different way to rig the game.

The real bad news is that job growth is being driven by policies coming from Washington, mostly Obamacare.

And of course, like anything else D.C.-related, the Democrat policies have it exactly backwards.

While it’s true that job growth was robust, it came from the growth of PART-TIME jobs, which are the only kind available. On a net basis, the economy lost 326,000 fulltime jobs.

Obamacare changes the definition of full time employment to 30 hour a week from 32 hours and requires companies over a certain size to purchase health benefits for all fulltime employees. As a result, companies are doing what we all knew they would: They are cutting fulltime employment and replacing it with part-time help.

There was some hope this phenomena, which Shedlock calls the Obamacare Effect, was mostly over in the employment arena.

More alarming still, U6 Alternative Unemployment went up a half percentage point from 13.8 to 14.3 percent. U6 unemployment counts the employed and those marginally attached to the workforce, people who don't get counted in the headline number that makes the nightly news. It's probably a more accurate way of measuring employment because of the uniquely poor economic policies coming from Washington.

U6 unemployment has remained stubbornly high, barely moving off of the 17.1 percent rate posted in late 2010 and early 2011.

Yikes! In other words U6 Unemployment is not “steady.” 13.8 percent to 14.3 percent in one month is a dramatic increase.

Another year of this and you’ll see Americans packing Tahrir Square calling for an end to rule by the Muslim Brotherhood in the U.S.

“Last month there was no jump in part-time employment which had me wondering if the the bulk of the Obamacare effect (employers reducing hours from 32 to 25 and hiring hundreds of thousands of new employees to make up the hours) had mostly played out,” writes Shedlock. “This month, the trend of huge part-time employment resumed, and in a major way.”

But even without the Obamacare Effect, job growth has been pretty bad.

And while labor force participation rates have backed off historic lows, the number of discouraged workers- those who have looked for a job in the last 12 months, but aren’t looking anymore- rose by 247,000 people this month.  These are called short-term discouraged workers.

If you add in the long-term discouraged workers, which we stopped counting in 1994, unemployment is around 24 percent. More importantly, the figure is going the wrong way and has been going the wrong way since 2009. Were it not for the statistical mirage of the government conveniently not counting long-term discouraged workers, unemployment would be setting records.

For over a year the market has lived in a “sweet spot” where economic growth was too slow and labor markets too loose for the Federal Reserve to justify cutting off quantitative easing (QE).

That they have signaled an end to QE isn’t because the labor markets have steadied.

It’s because QE itself has failed.

The hiring impulse is there. American companies can hire. The federal government has just given them no good reason to, and many good reasons not too.

Share this on Facebook
Tweet
Deeply Irresponsible: Biden Blasted for Weighing in Ahead of Chauvin Verdict
Katie Pavlich|
Biden Taints the Chauvin Trial By Praying the Jury Gets It 'Right'
Katie Pavlich|

Deeply Irresponsible: Biden Blasted for Weighing in Ahead of Chauvin Verdict