The White House is doing a fabulous job keeping oil prices low through strategery, says All-Business Oracle, CNBC, where the motto is: We’re the Real Rock Star of the Stock Market.

“The White House promise that it could release oil from strategic reserves if prices get too high,” says CNBC “is keeping a lid on crude prices, already under pressure from slower global growth.”

CNBC trumpets this view in its not-too-subtle homer headline How the White House Is Keeping a Lid on Oil Prices.

Yes, how indeed has this White House accomplished the marvelous feat of keeping oil prices low despite a worldwide once- in-100-year recession?

Well with due respect to CNBC’s all-knowing wisdom, the truth is that oil prices have not only not come down, but on a relative basis, they are still very high. 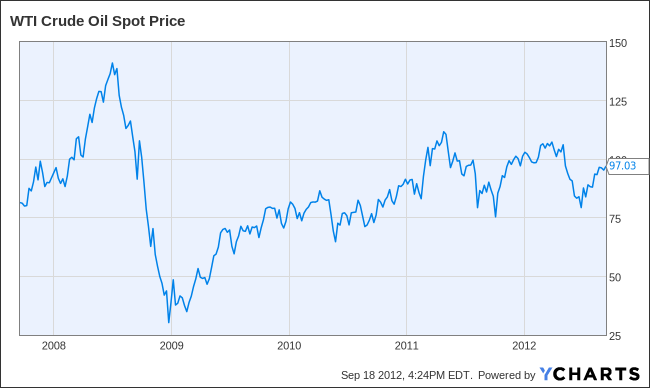 At the height of the Great Recession spot oil prices printed around $30 a barrel for West Texas Intermediate Crude. And although prices are off the April 2011 high of near $112 per barrel, prices remain stubbornly close to $100.

Yet as our contributor Mike Shedlock pointed out last week, demand for oil is going down, not up. 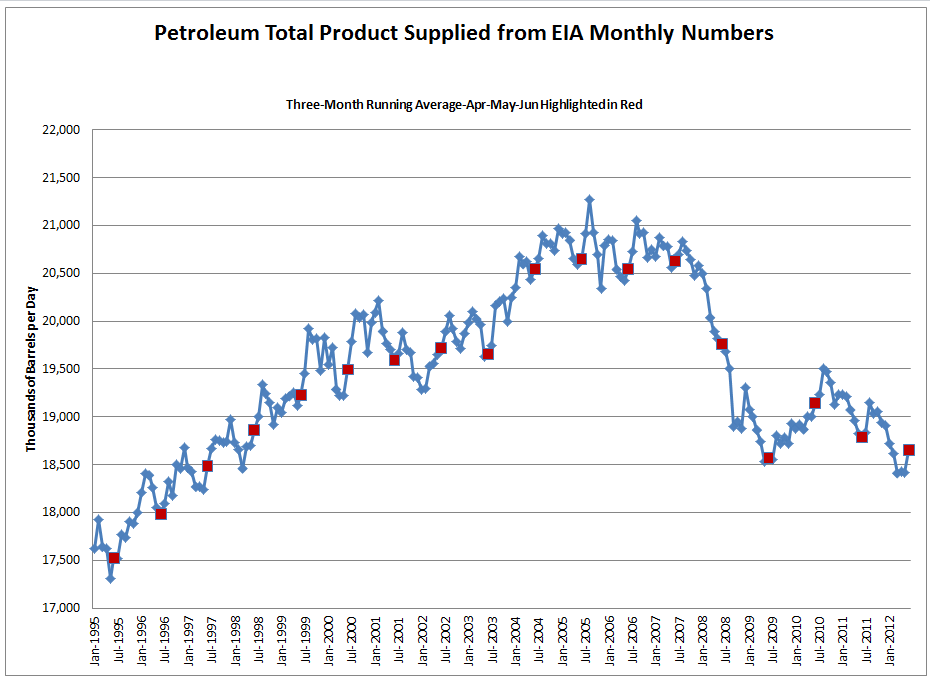 In fact, Shedlock quotes James Beck, Lead Analyst, Weekly Petroleum Supply Team for the Energy Information Administration who, while not speaking for the EIA, supplied his personal opinion on oil demand and what it means for the overall economy.

Demand, says Beck “remains significantly below 2010 and 2011 levels--remaining very near 1997/98 levels.  This 15 years of demand destruction cannot be explained fully by increased efficiency or increased use of biofuels and renewables (these have, at most, a marginal effect). This is truly an indication of the real and continuing trouble in our economy, high unemployment and underemployment, loss of manufacturing, and reduction of shipping.”

So demand has fallen of to 1997 levels, yet we’re still seeing prices that are ruinous to the economy. One of the benefits of a recession should be that at least the prices of things like oil and food will go down.

So, the better question for CNBC to ask- and answer- then is: How is the White House keeping oil prices so high?

From James Yates at Money Morning:

The price of oil illustrates the QE effect.

Economic stimulus measures such as QE3 lower the value of the U.S. dollar and other fiat currencies. From that, investors flee paper assets for commodities such as oil, grains and precious metals.

With economic growth projections low in the United States, China, and India, and with Europe in a recession, oil has reason to slip. But speculators, as a result of QE3, helped push the price of oil toward $100 a barrel. Rex Tillerson, chief executive officer of Exxon Mobil Corp. (NYSE: XOM), said in testimony before Congress last year that traders had driven up the price of oil by 40%-50%. 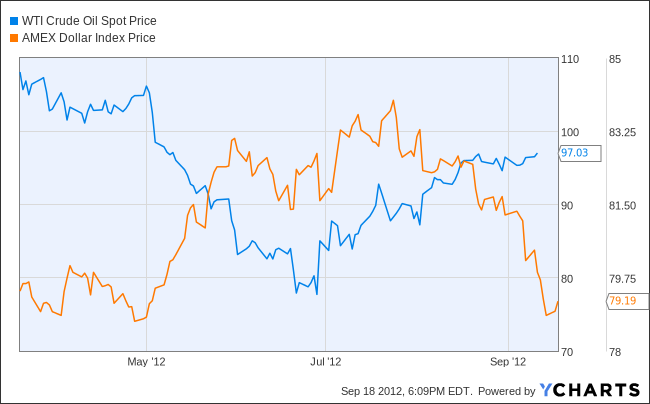 Yates says that despite deteriorating economic conditions, the devaluation of the dollar from QE3 has led to price inflation in oil, as the chart above indicates.

Conversely, Yates also says that QE3 could spell the greatest trouble for Obama:

But incumbent presidents don't fare well during gas-price spikes: Ford fell in 1976, Carter lost in 1980, and Bush was defeated in 1992.

Gas prices have risen more than 50 cents in the past two months. The increase in gas prices in August was the biggest one-month jump in overall consumer spending in three years.

Coupled with higher food prices and the rising costs of foreign goods, the inflationary spiral from QE3 could be the great incumbent slayer come Nov. 6.