Polls, Pump, No Friend to Obama

While news last Friday from the Bureau of Labor Statistics that unemployment remained unchanged and that 227,000 jobs were created in February shows that the Obama-induced stimulus slide in the economy has slowed, it also contains some significant bad news for the president.

As the labor participation rates edged back up, the number of people without jobs also edged up a bit too from 12.758 million to 12.806 in the last month. And while the 227,000 jobs created for January is better than less-than-200,000 jobs that we have come to expect, much of the gain is in temporary employment, signaling perhaps, at best a bottom for labor.

But what it’s not signaling most certainly is a robust recovery.

However they cook the books, it's not helping Obama either at the polls or the pump.

Surprise! Just when they thought that Barack Obama was pulling ahead, with positive job ratings, and just after the mainstream media have been savaging Republicans for two words Rush Limbaugh uttered on his radio program, Obama's numbers seem to be tanking.

Recent polls have tended to confirm that Obama's no enjoying the same type of bounce in public opinion as the media has so far suggested.

Even the New Yorker got the memo:

In case you didn’t hear about it, the latest New York Times/CBS News poll, which was released on Monday evening, showed President Obama’s approval rating dropping nine points in a month: from fifty per cent to forty-one per cent. During the same period, the President’s disapproval rating rose by four points, to forty-seven per cent.

As our own Mike Shedlock points out, employment in 2012 is roughly the same as it was back in 2001. In essence, Obama has compressed a lost decade into just three years. And not matter what the official numbers say, voters are reacting to it. Additionally, the BLS already is making significant downward revisions to employment for new business estimates they made in the January report  via the birth/death model and other seasonal adjustments , according to Shedlock.

And the hanky-pankery isn't just confined to birth/death numbers. As John Crudele of the New York Post reported early this week:

Take, just as a single example, Labor’s report in early February. It showed that 243,000 new jobs were created in January.

The only problem was that the number wasn’t true. The pure, undoctored, not seasonally adjusted figure showed there was really a loss of 2.689 million jobs.

There is always a loss of jobs after the Christmas season. And any professional in the financial industry who doesn’t know that needs to get into another line of work.

As I’ve reported before, the 2.689 million job loss turned into a gain of 243,000 only because Labor’s seasonal adjustment programs expected the job losses to be bigger. The warm winter weather probably kept some people from being put out of work, and this threw off Washington’s calculations.

Now here’s another brief reminder: We’ve been here before with the Obama economy- like last year- and it won’t take much- think rising gas prices, Israeli air strike- for the economy to go back into the tank.

So don’t count me as one of the people who thinks the employment report is Obama’s friend.

In part that’s because Obama jettisoned his business-friendly chief-of-staff, Bill Daley, in favor of the more radical, whacko-wing of the White House who is determined to wage a class warfare campaign around spending a ton more money.

And the longer economic conditions remain stable, yet, essentially weak, the more likely it is that Americans are going to reject Obama’s massive spending programs and class warfare rhetoric, without which, he’d have an administration bereft of any ideas at all. 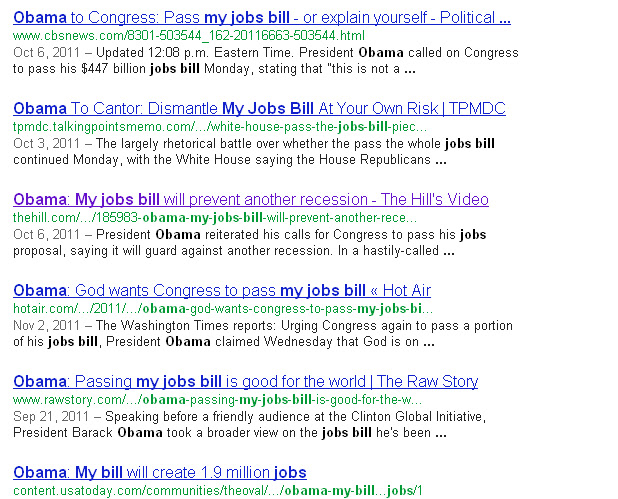 It wasn’t too long ago that the employment crisis was so grave that Chicago’s very own Rep. Jesse Jackson Jr. was suggesting the president suspend the Constitution.  Previously Governor Bev Perdue (Democrat) was suggesting that we suspend elections to address employment, thereby ensuring that she wouldn’t get to run for reelection this year. Both were foolish arguments back then and both appear even stupider in light of events.

The biggest crisis that both progressives were concerned with wasn’t jobs; it’s the crisis created by six years of failed policies- the possibility of failed elections.

And that’s about the size of it for Obama too.

It’s wasn’t too long ago that the president was touring the country foolishly demanding that Congress pass his pork-spending bill he called “My Jobs Bill 2.0”  before letting Congress even read it. “Pass my jobs bill now,” said the president before he had even delivered a copy of it to Congress- or wrote it.

“[I]f you love me, you've got to help me pass this bill," said Obama as he kicked off the desperation reelection tour back in September.

But hey, guess what?

In the meantime, Obama has somehow misplaced the campaign rhetoric supporting “My Jobs Bill” along with “My Foolish Budget” and “My Invisible Energy Policy.”

Instead he’s taken to campaigning about income inequality and tax increases.

And I’ll take my chances on those arguments at time when people would be happy to have any rising income, any lower spending and any affordable energy no matter the form.