The Next Subprime Implosion 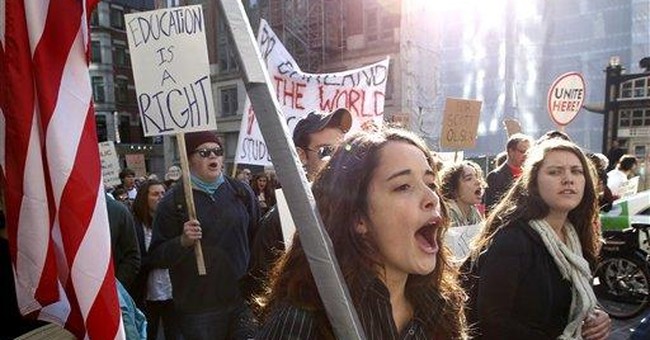 The subprime mortgage crisis led to massive foreclosure rates on American homeowners and was a major cause for the 2007-2009 economic recession that nearly tanked our economy.  The foreclosed real estate was valued around $1 trillion.

Your trivia question is this: In 2020 (next year) what will be the student loan debt at risk in the U.S.?

The answer:  almost $1.7 trillion, about 70% higher than the amount involved with the real estate crash that caused such pain in America and around the world between 2007 and 2009.  Put another way, $1.7 trillion represents roughly 10% of our GDP.

About 7 million homeowners lost their homes to foreclosure between 2007 and 2010 due to the housing crisis and subsequent recession.   But more than 6 times that number, or 44.7 million Americans, hold student loan debt today.  Only about 37% of those loans are currently in repayment.  The rest are delinquent or in default; or, they’re in deferment or forbearance, meaning they aren’t currently being pursued.

So how did we get here?

In fact, many of those with student loans were literally banking on it.  They stopped paying their student loans believing that Hillary would somehow shake a magic tax tree, find the money, and forgive all the snowflakes the billions they had rung up in student loans. Hindsight being what it is, we now know things didn’t work out that way, and now those millennials blame Trump for their student debt.

The real estate crash was different.  In that instance, easy debt led to profligate speculation.  People who had no business doing so were buying 2, 3 or more speculative properties at a time and financing 100% of often inflated prices.

I remember hearing stories in which a developer put up a tract of homes for sale starting around $150,000 and hundreds of prospective buyers showed to bid prices up over 100% of what the seller was asking - all with a minimal or no downpayment.  To one extent or another, this scenario played out from Las Vegas to Miami to Washington DC and everywhere in between.

The problem with student loans is the inevitable domino effect.  Let’s say a make-believe student named Bennie owes $30,000 (about the average graduate’s debt load.)  Let’s also assume Bennie majored in one of the more popular, but worthless majors available in almost every college today - philosophy, drama, journalism, psychology, or some equally unmarketable skill.  Well, imagine Bennie’s horror when he learns there are no jobs available in the field for which he just borrowed $30,000.

Bennie’s uncle was right, he should have focused on healthcare, technology, or engineering.  But alas, there’s far too much critical introspection involved in Bennie blaming his own poor decision making, so instead he blames Donald Trump and volunteers on the campaign of his favorite loan-forgiveness Democrat presidential candidate.

While Bennie’s not rallying for Liz, Bernie, or Kamala; he’s working at the local McDonalds for the minimum wage of $10.00 an hour; which, of course, doesn’t begin to touch his student loan payment of $300 or so per month.

The solution seems plain.  Bennie protests for a $15.00 minimum wage, or $20.00, or whatever he cares to make because once the government sets wages and they’re no longer tied to that pesky law of supply and demand he can ask for anything he wants.

Finally, the local wits who run things raise the minimum wage to $15.00 an hour.  But while the government may divorce its decrees from market forces, reality cannot, and Bennie finds his hours drop from 40 each week to around 20. Now he’s making $400 less each month than he was when the minimum wage was 30% less.

Meanwhile, Bennie’s student loan Is rapidly falling into arrears, but the law won’t let him get rid of it in bankruptcy so his credit score takes a hit and keeps moving south.

Now, even if by some miracle Bennie gets a job making real money; he can’t buy a car, finance furniture, or qualify for a decent credit card rate.  And forget about buying a home.  Bennie’s credit is trash for the foreseeable future.  He can’t get married, raise a family, or continue his education.

Now multiply Bennie by 30 million.  And don’t forget all the parents who co-signed those loans for the Bennies everywhere who are moving into retirement and can’t pick up the tab.

That kind of hit to our economy could well make the subprime disaster that nearly swallowed our economy back in 2008 look like a minor tremor.

With boomers dying off and so many millennials unable to really participate in our economy, we are in for one hell of a ride.

Remember election night 2016 and the news broadcasts showing all those crying snowflakes?   I wouldn’t be surprised to find out it was less the death of Hillary’s White House hopes they were mourning, and much more the desolation of their own futures.