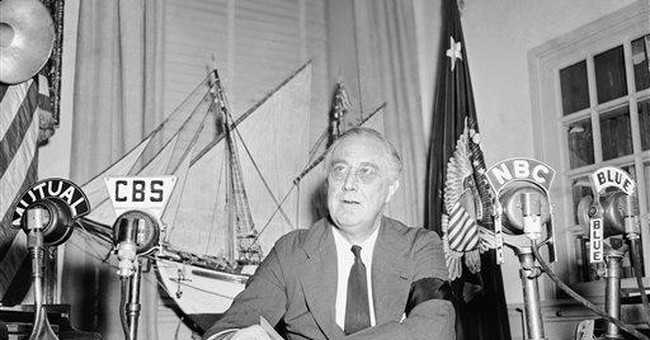 Franklin Roosevelt ushered in the National Industrial Recovery Act, NIRA, in the late spring of 1933. It was tragically supported by many industrial leaders at the time; as well as the Chamber of Commerce’s president, H.I. Harriman. A quote from Harriman illustrates the malevolent nature of government and corporate coercion that ran rampant in the early 1930s.

The “laissez-faire economy, which worked admirably in earlier and simpler industrial life must be replaced by a philosophy of planned national economy.”[1]

Author and researcher Marvin Olasky reported of the corrupt mindset of corporate leaders during this period. Olasky notes, “The partnership idea of corporatists and leftists, keystone of the original New Deal conception received great support from Washington corporate representatives. [It was reported] that Chamber of Commerce leaders ‘are ready to subscribe to the idea of governmental control of business to a degree that would have seemed incredible a year ago.’”[2]

According to the research of economists Cole and Ohanian, the NIRA “tossed aside the nation’s antitrust acts and permitted industries to collusively raise prices provided that they shared their newfound monopoly rents with workers by substantially raising wages well above underlying productivity growth. The NIRA covered over 500 industries… Each industry created a code of “fair competition” which spelled out what producers could and could not do, and which were designed to eliminate “excessive competition” that FDR believed to be the source of the Depression.”[3] FDR was either completely out of touch or, more likely, deliberately trying to take over much of the economy.

The level of support of many of the leaders of large industrial firms was nothing less than stunning. One company “suggested [the] appointment of an “industrial dictator” for each major industry. The dictator would be authorized to set production schedules, prices, wage rate, and just about everything else.”[4] What the Roosevelt administration and this unholy league of industrial leaders were driving for was industrial communism. The NIRA did just that. The NIRA was administered by the National Industrial Administration, NRA, and leveraged through industrial trade organizations by establishing, through regulations, many of the objectives listed above. But in reality these impious leaders saw it as a means to stifle competition – which it did, at least temporarily. The NRA did wreak damage:

This National Industrial Recovery Act (NIRA) went far beyond reasonable revocation of some antitrust provisions. Instead, it allowed legally enforceable establishments of favorable prices for some products and unfavorable ones for others, with the result that companies powerful enough to write the rules could help themselves and hurt others.[5]

And they succeeded. With the cooperation, support, and even authoring of the rules by these powerful companies, government had a firm grip around the throat of many industries. In order to commandeer public support, a critical public relations campaign was developed and deployed. As C.J. McNair and Richard Vangermeersch report, “The NIRA was the tool used to undo the market mechanism; uniform costing and cost-plus pricing were created to replace Adam Smith’s “invisible hand of the market” with a visible and enforceable alternative.”[6]

Thomas Jefferson warned with words of wisdom, “On every unauthoritative exercise of power by the legislative must the people rise in rebellion or their silence be construed into a surrender of that power to them? If so, how many rebellions should we have had already?”[7]