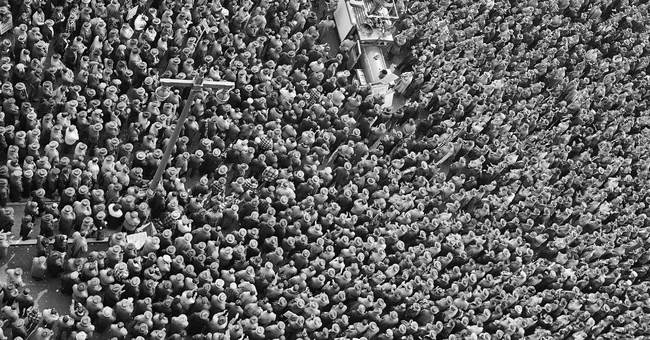 Friedrich Hayek summarizes the reaping of abundance from man exploiting God-given freedom as it manifests, as explained by Adam Smith, in economic exchange, as I discussed previously in The False Choice Between Piety And Profit and Adam Smith’s Invisible Hand Is The Hand Of God.  Hayek writes that “the spontaneous collaboration of free men often creates things which are greater than their individual minds can ever fully comprehend.”[1]  One might call this economic grace.  Hayek is paraphrasing Adam Ferguson, contemporary and friend of Adam Smith and David Hume (and part of the Scottish Enlightenment), who wrote  in his 1767 Essay of the History of Civil Society, “nations stumble upon establishments, which are indeed the result of human action but not the result of human design.”[2]

Hayek goes on to state, in what would be an excoriation of central planning that “if left free, men will often achieve more than individual human reason could design or foresee.”  In essence, freedom always trumps planning, statism, or collectivism for human progress, abundance, and service toward our fellow man.  But the collectivists view man, and his freedom, to be a self-interest individual, despairingly and with contempt.  Hayek writes, “In their view man was by nature lazy and indolent, improvident and wasteful, and that it was only by the force of circumstances that he could be made to behave economically or carefully to adjust his means to his ends.” Hayek concludes that “There is all the difference in the world between treating people equally and attempting to make them equal.”[3]

Hayek, Smith and Ferguson saw it completely differently from the collectivists but in parallel to the foundations that became part of the United States formed out of the American colonies.

This is the very observation that Alexis de Tocqueville made during his visit to America in the early 1830s.   As if he were writing it about the godless collectivist elites today, Tocqueville extends a direct blow to central planning:

However enlightened and however skillful a central power may be, it cannot of itself embrace all the details of the existence of a great nation.  Such vigilance exceeds the powers of man.  And when it attempts to create and set in motion so many complicated springs, it must submit to a very imperfect result, or consume itself bootless efforts…like those devotees who worship the statue and forget the deity it represents.[4]