Adam Smith’s Invisible Hand Is The Hand Of God 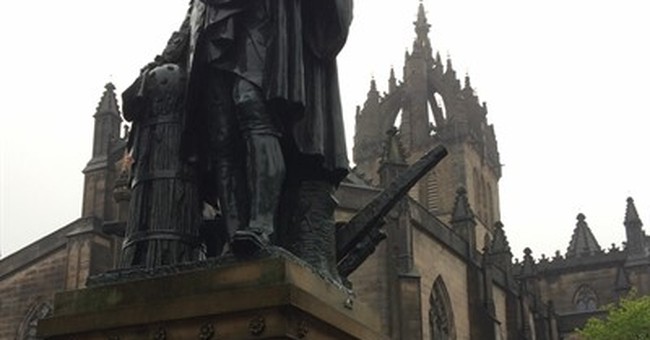 When man is at liberty to pursue his God-given talents, interests, and skills as he sees fit, he is free.   When man has this freedom to exercise these gifts, he creates betterment for himself and, as a result, betterment for his fellow man.  Adam Smith acknowledged this in his famous statement about the invisible hand.   “[T]o direct that industry that its produce maybe of the greatest value; every individual necessarily labours to render the annual revenue of the society as great as he can.  He generally, indeed, neither intends to promote the public interest, nor knows how much he is promoting it.  By preferring the support of domestic to that of foreign industry, he intends only his own security; and by directing that industry in such a manner as its produce may be of the greatest value, he intends only his own gain.  He is in this, as in many other cases, led by an invisible hand to promote an end which was no part of his intention.  Nor is it always the worse for the society that it was not part of it.”  Smith is acknowledging society’s gain from our own independent pursuit of self-gain.  He continues, “By pursuing his own interest, he frequently promotes that of the society more effectually than when he really intends to promote it.  I have never known much good done by those who affected to trade for the public good.  It is an affectation, indeed, not very common among merchants, and very few words need be employed in dissuading them from it.”[1]  In short, Adam Smith is stating that individual self-interest is also society’s interest, and it is a result of God’s plan.

While contemporarily Adam Smith’s Invisible Hand is expounded from an economic perspective, and, of course, Smith did mean that – in part – but more profoundly Smith also meant that, even though it is the invisible hand of the free market, God’s Hand was and is behind this market mechanism.  It is the Natural Law of economics.  God’s Law are completely interwoven with the natural laws of good economics.  Smith wrote, seven years prior to the Wealth of Nations, that the sovereign Children of God “are led by an invisible hand to make nearly the same distribution of the necessaries of life…

…which would have been made, had the earth been divided into equal portions among all its inhabitants, and thus without intending it, without knowing it, advance the interests of the society, and afford means to the multiplication of the species.  When Providence divided the earth among a few lordly masters, it neither forgot nor abandoned those who seem to have been left out of the partition.  These last too enjoy their share of all that to produces.   In what constitutes the real happiness of human life, they are in no respect inferior to those who would seem so much above them…all the different ranks of life are nearly upon level, and the beggar, who sums himself by the side of the highway, possesses that security which kings are fighting for.[2]

In essence, Mr. Smith is prophesizing what America would deliver, not only to its citizens, but also what its Light would manifest out into the rest of the world- as American economist Jerry Bowyer and Swedish statistician Hans Rosling frequently report.  As Jesus simply proclaimed, “I came that they may have life, and have it abundantly.”[3]