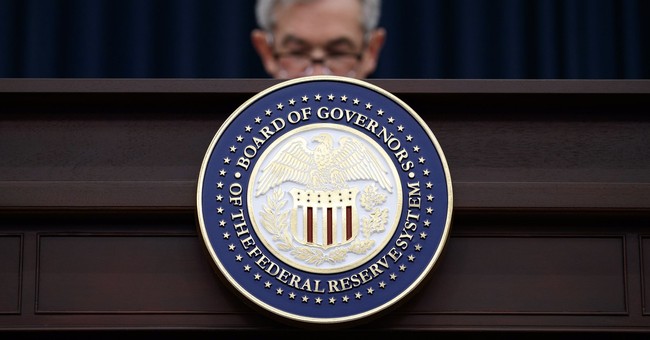 We previously looked at inflation levels, and then at whether or not those inflation levels were due merely to the transient effects of the short bout of deflation which accompanied the deepest periods of the COVID shutdown. We found that inflation is high, and that this is not just an effect from the temporary distortions of COVID. So, despite predictions last year and earlier this year that inflation would be transitory, it has not transited away, but rather transitioned upwards.

But what of the future? Though "we see through a glass darkly," there are some things we can look at now which help us understand what is more likely in the future.

One reason to be concerned about future inflation is that increasingly high debt levels make government finance increasingly dependent on the creation of new money by the central bank to finance this debt. So, Fed policy is not just about things like money supply and inflation, it is now also about national debt and deficits. The Fed enables the government to borrow at low rates, which enables the government to keep spending more than it takes in without the usual consequences which attend non-government borrowers who get over-leveraged.

So, even if the Fed's leaders no longer thought that easy money was needed to keep from falling into deflation or to stimulate the economy, it would still be under enormous pressure to be a captive banker to the government from which it receives its authority. And that government has been on an astonishing spending spree. Let's look at the data:

The purple line is total public debt in trillions. The teal line is that debt in ratio to annual GDP in percentage points. Imagine that annual economic growth and annual national debt increases are in a race. When they are both running around the track at about the same pace, then the ratio between them remains fairly stable. If the economy grows at 4% a year and the debt grows at 4% a year, then algebraically the ratio between them stays about the same.

Now imagine that the economy trips over a rock on the track and falls and hurts its ankle, but debt keeps running. The coach runs out onto the track and quickly wraps up the ankle, and up the runner jumps and begins to run again. But in the meantime, debt has run another lap and a half while the economy was getting back on its feet. The economy never makes that up. It will, of course, run more laps and hit the markers, but if debt keeps running at the same pace, it never catches up. Making matters worse, in this analogy, debt didn't maintain its pace of growth, it vastly accelerated it. So, the economy took about one and a half years to get back to where it was when it stumbled. That is, the size of the economy at the end of June was about the same as the size of the economy just before the COVID crisis. But as you can see above, debt didn't just keep running, it sped up as government threw relief and stimulus programs at the economy.

So, the debt as percentage of GDP -- which had been hovering between 90% and 100% of GDP since the end of the Great Recession -- is now hovering at around 120%, and even since the economy has recently recovered, that percentage has seen only negligible declines, because that lost year (lap) and a half isn't made up just because the economy gets moving again. These elevated debt levels are a new normal.

What about money supply (in this case, M1)? Here’s how Investopedia defines M1:

“M1 is the money supply that is composed of physical currency and coin, demand deposits, travelers' checks, other checkable deposits, and negotiable order of withdrawal (NOW) accounts. M1 includes the most liquid portions of the money supply because it contains currency and assets that either are or can be quickly converted to cash. However, "near money" and "near, near money," which fall under M2 and M3, cannot be converted to currency as quickly.”

Here’s what’s been happening with M1 while the economy has been losing its race with government borrowing:

The Fed created money partly to fulfill what its leaders thought was good monetary policy, but clearly, it is also moving in sync with government fiscal policy by providing money to a credit system which would otherwise have been strained by the demands of government borrowing.

What could change this? High levels of spending discipline by the government, as well as pro-growth tax and regulatory policy. Would you bet on these two things happening?

Next, we’ll look at which asset classes tend to do well during bouts of inflation.