Is There A Spiritual Element To China’s Pig Plague? 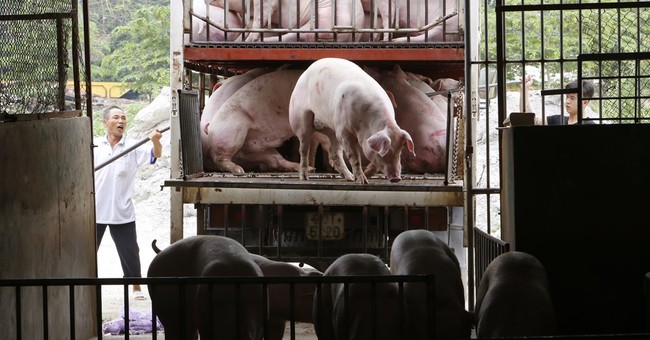 If you are not religious, the rest of this article is going to seem very weird to you. Let him who has ears hear.

China has been engaged in escalating persecution of religious minorities, Christians and Muslims. I wrote an article for the Asia Times warning the leaders of China that they are exposing themselves to the judgment of God.

So what about this swine plague? I can't speak for God, but as far as judgments go, it fits the pattern. The plagues on Egypt included food sources such as cattle.

But what really strikes me is how this is an echo of the Gadarene Demoniac episode. I have argued before that the incident is not just about individual spiritual factors, but also involved geopolitical ones. The group of spirits which drove this man to madness called themselves 'Legion', a very geopolitically fraught term. This is rendered even more obviously important when you consider the importance of the location, in the Decapolis, a region founded by the imperial pagan powers as a cultural assault on the distinctive particularism of Jewish culture. These cities were then sponsored by the Empire to impose paganism on the region. And all of this was held in place by, you guessed it, Roman legions.

And the boar/pig was a popular totem on the banners of Roman legions.

Legion was an imperial entity. The point of the Gospel account is that behind these human forces was something darker and more sinister.

Is that what we're seeing here? China has re-booted its imperial ambitions, and like the occupiers who built the Decapolis, has been placing idolatrous images in the sacred places of the people of the Book. They are violating the integrity of the distinct culture of Hong Kong, imposing their own Maoist/Caesarian pagan culture there.

It is symbolically fitting that we are seeing the mass deaths of pigs if 'Legion' is being exposed for what he truly is.